The three Arabs with Israeli citizenship who smuggled guns into the Temple Mount exploited the atmosphere of trust and reverence that enabled lax security arrangements. 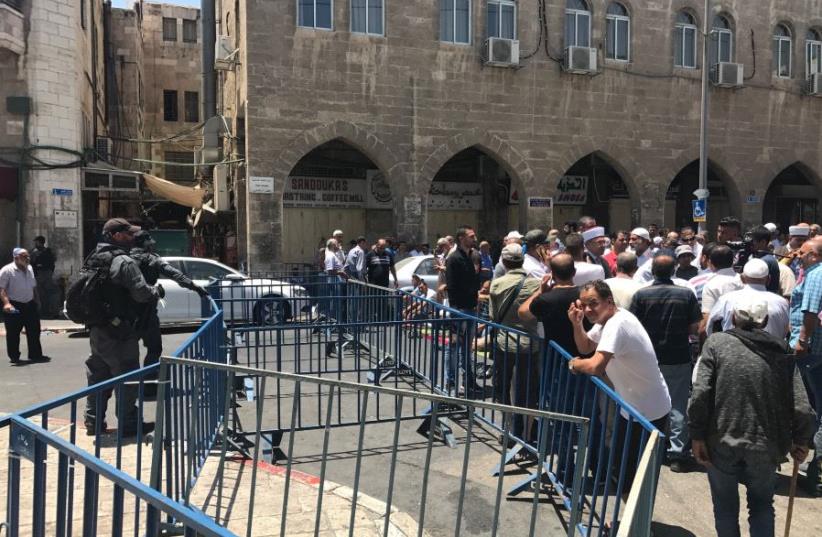 Israeli police man a barricade on Salah a Din street after a deadly terror attack in Jerusalem, July 14, 2017.
(photo credit: SETH J. FRANTZMAN)
Advertisement
Is there a cause and effect relationship between the new security arrangements instituted by Israel on the Temple Mount and the horrific murder of Yosef Salomon, 70, and his children Chaya, 46, and Elad, 36? There is according to 19-year-old Omar al-Abed, who massacred the three and seriously wounded Yosef’s wife, Tova, 69. Before leaving his home in Kobar on Friday night to carry out his attack in the neighboring settlement Halamish (Neveh Tzuf) in Samaria, he posted a message on his Facebook page: “They are desecrating the Aksa Mosque and we are sleeping, it is an embarrassment that we sit and do nothing...all I have is a sharpened knife, and it will answer the call of al-Aksa.” He signed off with emojis including hearts.But there is no connection. What Abed did is what people have been doing to Jews for millennia, refusing to recognize Jewish nationality, rights, statehood and connection to this land. This has nothing to do with metal detectors. It is about hatred and radical ideology, fueled by lies and incitement.Connecting between the two like Abed did is a convenient way of thinking. It absolves him of responsibility for his actions and shifts the blame to the victim.In Abed’s case, the despicable act of murdering an elderly man, seriously wounding his wife and killing two of his children can be transformed into a heroic act that is part of the Islamist struggle for control over al-Aksa, or as retribution for perceived grievances said to have been perpetrated by Jews who have no right to political autonomy in this land, let alone on the Temple Mount.If a cause-and-effect relationship exists at all in this story it is the connection between the cold-blooded murder of two Israeli Druse police officers adjacent to the Temple Mount and the decision by Israel to place metal detectors at the entrance to the Temple Mount to prevent similar attacks in the future.In a world governed by reason, ensuring the Temple Mount remains safe and gun-free would be seen first and foremost as a Muslim interest, since Muslims make up the vast majority of people who pray at the site and do not want to see it desecrated by acts of murder. The three Arabs with Israeli citizenship who smuggled guns into the Temple Mount exploited the atmosphere of trust and reverence that enabled lax security arrangements. Perhaps it was naive to think that this sort of attack could not take place. But our government does not want to repeat its mistake.Now, Netanyahu is being asked to cave in to the demands of the Islamists. A campaign in Israel is being led by Sheikh Raed Salah, head of the Islamic Movement, and by Hamas, and is receiving the backing of the Muslim Brotherhood in Egypt, Jordan and North Africa. The governments of Turkey and Qatar are also supporting the struggle.More “moderate” Arab leaders such as Jordan’s King Abdullah and Egypt’s Abdel Fattah al-Sisi are gradually being forced to fall in line with the Islamists. Palestinian Authority President Mahmoud Abbas, who initially denounced the murder of the Druse officers, has since changed course, suspending ties with Israel in protest against the metal detectors. The “Arab Spring” proved the power of the masses to bring about regime change. And its memory is still fresh in the minds of men like Sisi and Abdullah.In retrospect, Netanyahu should have foreseen all this.He has extensive experience with the explosive potential of the Temple Mount. The decision to place metal detectors on the Temple Mount seems not to have taken into consideration all the potential ramifications. Did Netanyahu ask himself whether the security benefits gained by introducing the metal detectors outweighs the price paid in the form of unrest, rioting and a renewed wave of terrorism? Sometimes it is better to be smart than right.At the same time, no amount of concessions will satisfy people like Abed, Sheikh Salah or the Muslim Brotherhood.Removing the metal detectors will not be the end of it. There will be new grievances, new “causes” for Muslim violence. Extracting concessions under threat of violence is one of the objectives of terrorism. The question is where do we draw the line. Perhaps we should have been “smart” when it comes to metal detectors.Ultimately, however, appeasing Islamists does not lead to real peace. When violence is rewarded it tends to become an incentive for more violence.