Integrating choices and limits can start around age two and continue through life. 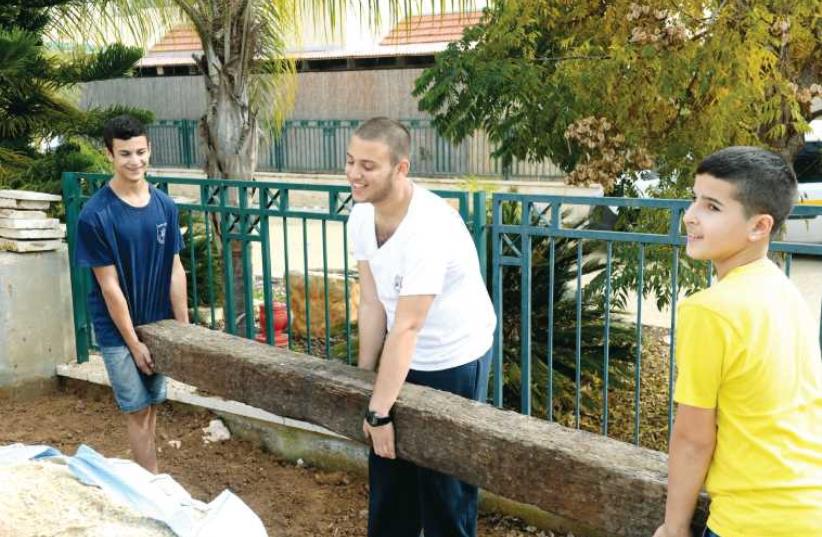 (From left to right) Sagi Farhi, Lidor Fachima and Iddo Ben-David help the Bayhesain family fix up their garden.
(photo credit: KOBY KOENKAS)
Advertisement
Many people think that children have too many choices; and further, that they are unequipped to handle them. It is true that navigating all of the choices available to children can at times be a daunting and frustrating task.However, the real problem is too few limits.Choices and limits go hand in hand in teaching responsibility. When the balance is out of alignment on either side, responsibility problems develop. Too few choices lead to dependency. Too few limits lead to a false belief that a child can have whatever he wants.When my son was in high school, he came to me and boldly announced that he needed new athletic shoes.“Great,” I said, “let’s get Converse All Stars – black, like the Boston Celtics.”“Dad, you’re a total dinosaur,” was his response.“Only dinosaurs wear Converse All Stars.”Offended, I said proudly, “I wear them.”“See, you’re a dinosaur,” he laughed.Feeling insulted, I asked, “So what do you want?” wondering if they might be something that the Celtics might wear.“Nike Cross Trainers,” he answered.At this time I had never heard of such a thing. “What are Nike Cross Trainers?” I asked with a hint of sarcasm.He smugly replied, “Cross training means they’re designed for every sport. I can play anything with them.”“But you don’t like sports,” I countered. “You’re a computer kind of guy.”Arguing with teenagers is a losing proposition. They are faster thinking, have had time to plan their arguments in advance while you have to respond on the spot, and use tricks to get you to win their argument for them. Teens get their parents to think they are arguing one point only to switch directions in mid-argument to another, usually after your words have put them in a winning position. Defending this strategy is very difficult and usually ends with the parent declaring, “Just do it because I said so!” First my son asked me if I listened to records when I was his age, to which I told him that of course I did; that’s why he likes music so much. Then he asked me if I really typed my school papers on my mother’s typewriter as I had bragged. I could see where this was going. He was trying to use my age against me. I told him that I typed every paper because my handwriting was so bad. The trap was set and I fell in headfirst.“Why is it that we don’t have records anymore, only CDs and no typewriters, just a computer? When you want something, you always get the newest technology, but when I want something, I have to get what you had when you were just a kid.”He had me dead to rights. So I said, “OK, you are right; let’s get the Nikes. What’s the difference?” It turned out there was a difference: about $200.I RESOLVED the problem by giving him $300 cash and told him this was his clothes allotment until winter break. After doing his math he realized that the cross trainers would greatly reduce the chances of obtaining a sweater and a pair of new jeans he had been eying for a while. I did two things that mattered. One, I made it his problem, not mine. By solving the problem himself, he learned about what it means to be responsible.By not having a vested interest in any particular solution, my emotions no longer interfered with my ability to step back and give him a chance to do it his way.That allowed him to learn responsibility by learning to live with the outcome of his choice without blaming me. This was a major gain for both of us.The second outcome that mattered was giving him a real choice with real limits. The limit was $300. The choice was how to spend it. If I bought him the black all stars whether he liked it or not, that’s a limit without a choice. No learning about responsibility comes from that. If I bought whatever he wanted, that’s a choice with no limits. No learning occurs here either.Integrating choices and limits can start around age two and continue through life.Children can be given the choice of two outfits to wear starting when they are about three years old.Later they can be given three choices of what to have for dinner. Other choices within limits include when of three times to do a chore, four chores to choose from, or two hours to use electronic media – with your child choosing when the two hours are. Responsibility is one of the most important values we can teach our children. It takes both choices and limits to teach it.The author has written 20 books on children’s behavior and their motivation issues. He is the director of the graduate program in behavior disorders at David Yellin College in Jerusalem.