Clinton is the most experienced and best prepared candidate

There is no doubt in my mind that Clinton will make an excellent president, and that voting for Trump is like playing a very risky gambling game at one of his casinos. 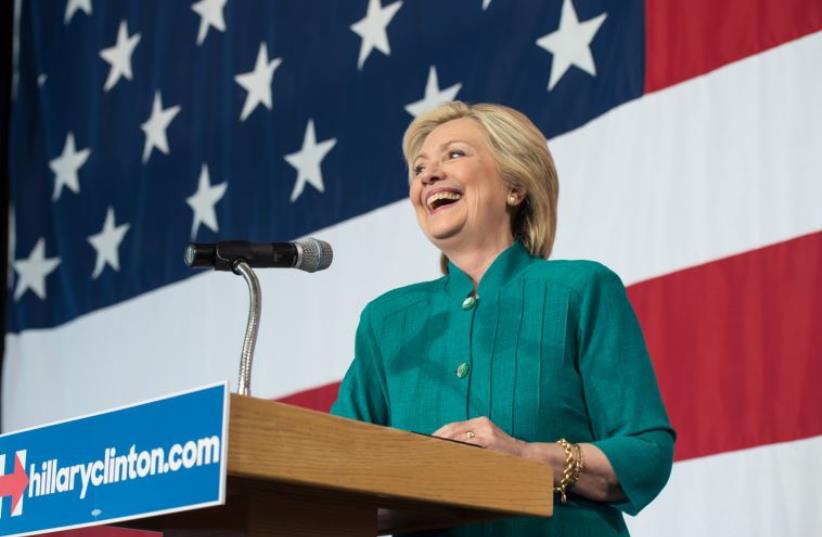 Hillary Clinton at a campaign event in Des Moines, Iowa
(photo credit: Courtesy)
Advertisement
Let’s begin with the fact that Democratic presidential candidate Hillary Clinton is one of the most experienced and best prepared candidates to be US president – ever.Having been a senator from New York, secretary of state and first lady, she knows what it takes to be a good president. The only other candidate with such a background in recent years was George H.W. Bush, who served as CIA director, ambassador to the UN and to China, and as vice president for eight years.Experience is not a dirty word.America, the world and Israel, too, needs an experienced and qualified president to help navigate the country through today’s troubled waters.And don’t just take the word of the Democrats. Listen also to the last two Republican presidents, George Bush Sr. and Jr. Listen to former first lady Barbara Bush, who said she can’t understand how any woman could vote for Republican presidential candidate Donald Trump after all of his denigrating remarks against women.Listen to former Republican mayor of New York Michael Bloomberg, who said at the Democratic National Convention that “Trump has left behind a well-documented record of bankruptcies, thousands of lawsuits, angry shareholders and contractors who feel cheated, and disillusioned customers who feel ripped off. Trump says he wants to run the nation like he’s run his business. God help us.”And listen to 50 of the nation’s most senior Republican national security officials, who signed a letter declaring that Trump “lacks the character, values and experience” to be president and “would put at risk our country’s national security and well-being.”We are an estimated 300,000 US citizens living in Israel, most of us dual citizens, and we share a responsibility for who will be the next president, both as Americans and as Israelis.There is no doubt in my mind that Clinton will make an excellent president, and that voting for Trump is like playing a very risky gambling game at one of his casinos.You have no idea what you will get, and I fear neither does he.Do we really need a president who denigrates Mexicans, African- Americans, women, Muslims and people with special needs – the majority of American society? Do we really need a president with absolutely no foreign policy experience, who suggests that NATO should be weakened, who has positive words for anti-democratic leaders like Russia’s Vladimir Putin and Turkey’s Recep Tayyip Erdogan, and who thinks that allies should develop their own nuclear capabilities? Having just marked the 71st anniversary of the bombing of Hiroshima and Nagasaki, are we really ready to let Trump be the man whose finger is on the nuclear button? Here in Israel, many American Israelis have been energized by the Democratic campaign. Clinton’s long record of dedicated experience and activism has energized many who believe that she will make a very capable president, a president who will be able to continue the rebuilding of the American society and economy begun during the eight years of the Obama administration, which rescued the country from a deep recession on the verge of depression.She will also break the glass ceiling, serving as a role model for young women everywhere. Many American Israelis were also energized by Vermont Sen. Bernie Sanders’s call for social justice, just as hundreds of thousands of Israelis were energized in the summer of 2011 by the mass social protest movement.Now the Clinton and Sanders camps are working together to build a more just and equitable American society, with plans for much-needed investments in infrastructure, for a reasonable minimum wage, for affordable higher education, for overturning the Citizens United ruling, which allows money to determine politics, and for an expansion of the affordable health care that all of us in Israel take for granted.When it comes to Israel, we know Clinton has a long record of dedication to the country and the needs of its people. A strong and viable economy, together with a solid and sober foreign policy, will ensure that America retains its leading role as the world’s only super power, a role we in Israel rely on. And it will ensure that the US will be able to help Israel confront the challenges of extremism in the region, and move toward a resolution of the Israeli-Palestinian conflict and integration into the greater Middle East.And here I would like to set the record straight. The iVoteIsrael Republican front group claims that in 2012, 85 percent of absentee voters from Israel voted for Mitt Romney, while only 14% voted for Obama. That statistic is totally unscientific, based on exit polls run at iVoteIsrael registration booths.We all know that Obama won between 78% (2008) and 70% (2012) of the American-Jewish votes, and the assumption is that Clinton will win 80% in 2016. Here the demographics are slightly different, because the 10% of American Jews who are Orthodox tend toward the Republicans, and they are a larger percentage of Israeli Americans in recent years, and there are 50,000 dual-citizen settlers.Yet there are also many American Israelis who support the Democrats, veterans on kibbutzim, in academia, professionals and civil society activists, many recent arrivals, young hi-tech people, entrepreneurs, consultants, artists and civil society activists, in Tel Aviv, Jerusalem, Haifa, Beersheba, students in all of the universities and Orthodox Jews and settlers too, who support the Democrats and Clinton, and who will do everything possible to elect Hillary and defeat Trump, for the sake of both America and Israel.In 2008, the Democrats made history when they elected the first African-American president.In 2016, the Democrats will once again make history, by electing the first female American president, Hillary Clinton.Hillel Schenker is past chairman of Democrats Abroad - Israel.