Another Tack: Some truly hated truths

The truth is that the world favors a one-sided war in which Arabs inflict punishment on Israelis but expect none back.

By SARAH HONIG
Oron Shaul’s misspelled name on Al-Jazeera: The number on his dog-tag became a weapon in Hamas’s psychological warfare
(photo credit: screenshot)
Advertisement
Last Friday morning, during yet another so-called humanitarian ceasefire, we heard that Lt. Hadar Goldin was missing-in-action. Before this too was revealed as a ghoulish body-snatching attempt, it looked like the Palestinians had finally grabbed the mega-ransom-generating and game-changing live hostage they craved.Mind-bogglingly, the truth is that by the Hamas devil’s arithmetic, it was worth sacrificing over 1500 Gazan casualties to just maybe seize one Israeli. In crude propaganda terms, it was a vicious variation on the theme of the Oron Shaul episode. When Israel suspects an abduction (as in the Goldin case), Hamas torments us with silence. When we discount its claims (as in the Shaul case), Hamas crows about its macabre “successes.”Anyone who switched to Al-Jazeera early on in the ground phase of Operation Protective Edge heard piercing shrieks of what sounded like “Shaul Aron.” Then followed a screenshot of the Facebook page of a handsome blue-eyed fellow. His name was plainly spelled out: Oron Shaul. His Bar Mitzvah photos too went on Al-Jazeera’s spine-chilling display.Nevertheless, the hysterical narrator-cum-screamer evidently couldn’t pronounce the uncomplicated syllables and couldn’t even figure out which was the surname and which the given name (likewise wrongly transcribed in the banner caption).A sickening graphic kept getting flashed every few seconds, punctuating the exultant screeches. It featured a huge fist gripping a thin helpless stick-like mini-figure in IDF olive greens. Its legs were degradingly spread sideways and its hands were thrust straight upwards and stretched out, with each finger extended grotesquely in the air. This was Hamas’s way of announcing the capture of “another Gilad Schalit.” More likely Hamas snatched a body, or body-part, blown out of the personnel carrier hit in the initial Shejaia confrontations.The number on Oron’s dog-tag became a weapon in Hamas’s psychological warfare. In the midst of what was billed as a humanitarian crisis of epic propositions, Hamas honchos found nothing better to occupy themselves with than to scour the social media and discover Oron’s Facebook uploads. 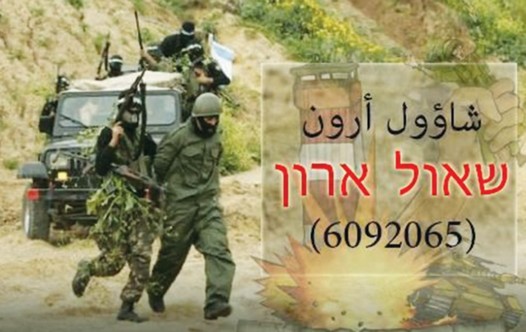