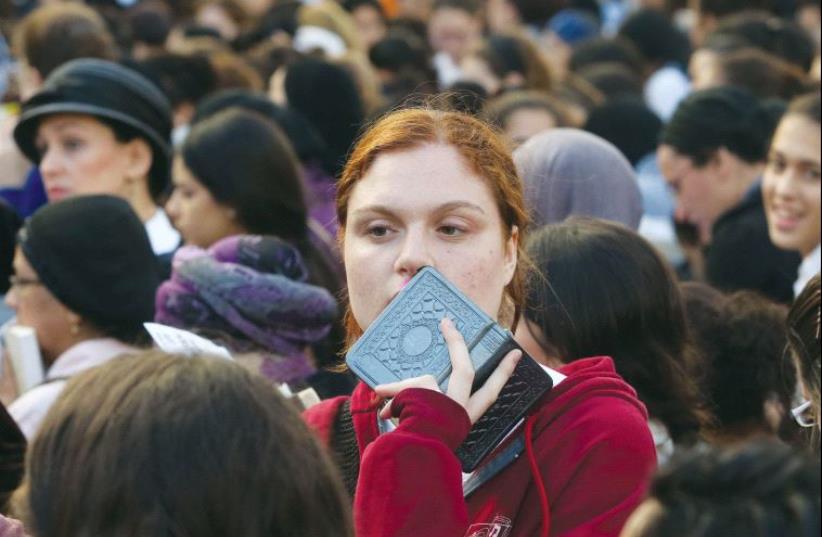 Women pray at the Western Wall in Jerusalem
(photo credit: MARC ISRAEL SELLEM)
Advertisement
Another Rosh Hodesh – this time, Rosh Hodesh Av – another battle at the Kotel.“Whores! Nazis! Goyim!” men in haredi garb yelled.(Please don’t ask me to explain the addition of “Non-Jews (Goyim)” to “Whores” and “Nazis.” It is equally – no, more – disgusting to me that “Non-Jew” is included in a list of insults as the insults are themselves.) “Do you even believe that the Temple should be rebuilt? Do you believe that the Torah was given at Sinai? Do you drive on Shabbat?” These questions were interspersed with spitting and shoving and throwing. Women covered head to toe blew whistles loudly in the faces of people praying, in the ears of babies.Anyone, regardless of age, associated with our Women of the Wall prayer group was a target.It was the questions – the demand that good Jews were literal Jews – that hung in the air around me beyond the Rosh Hodesh vitriol.“Do you care about the asylum seekers? The orphans of the world?” I asked back. My questions were met with blank stares. “What does that have to do with Judaism?” the blankness seemed to ask.Everything. Ritual mitzvot are not ends in themselves. They are building blocks – our particular Jewish building blocks – to a just and compassionate society. This week, in which we observe Shabbat Hazon (Sabbath of Vision), we read Isaiah 1:1-27, which includes God’s dismissal of the empty rituals associated with the Kotel, the very place I stand Rosh Hodesh mornings.“‘To what purpose is the multitude of your sacrifices unto Me?’ saith the Lord.‘I am full of the burnt offerings of rams, and the fat of fed beasts; and I delight not in the blood of bullocks, or of lambs, or of he-goats…. Bring no more vain oblations; it is an offering of abomination unto Me; new moon and Sabbath, the holding of convocations – I cannot endure iniquity along with the solemn assembly…. Your new moons and your appointed seasons My soul hateth; they are a burden unto Me; I am weary to bear them…. Wash you, make you clean, put away the evil of your doings from before Mine eyes, cease to do evil; Learn to do well; seek justice, relieve the oppressed, judge the fatherless, plead for the widow.”(Mechon-Mamre translation) As we approach Tisha Be’av, a commemoration of the destruction that comes from baseless hatred, let’s have hazon – the vision of imagination – for well-based love. Instead of fighting each other, demanding that empty rituals be emulated lockstep and locked-mind, let’s make our rituals and practices – varied as they are – meaningful.Instead of worrying about who drives on Shabbat, let’s strive to make Shabbat a day we reconnect with our highest selves so that we bring those selves to the six days of creation. Instead of worrying about who owns the word “kosher” (in Israel the rabbinate actually does), think of how discernment in our eating teaches us not to exploit the earth – and each other.We are told at least 36 times to protect the orphan and the stranger, and only three times not to mix milk and meat.That’s a 12:1 ratio of compassion and justice over ritual.With millions of orphans in the world, millions of refugees – including 50,000 here – let’s move from hate to love, from mitzvot as exercises in our own practice to mitzvot as exercises of our muscle for social change – that we may learn to do well; seek justice, relieve the oppressed, judge the fatherless, and plead for the widow.

The writer, a rabbi, is a founding member of Kamocha: A Jewish Response to Refugees and the founding director of Second Nurture: Every Child Deserves a Family – and a Community. Her book, Casting Lots: Creating a Family in a Beautiful, Broken World (Da Capo Press) is now available online and in most US stores.