Covering up Jewishness with duct tape

We cannot put our heads in the sand and hope things get better. 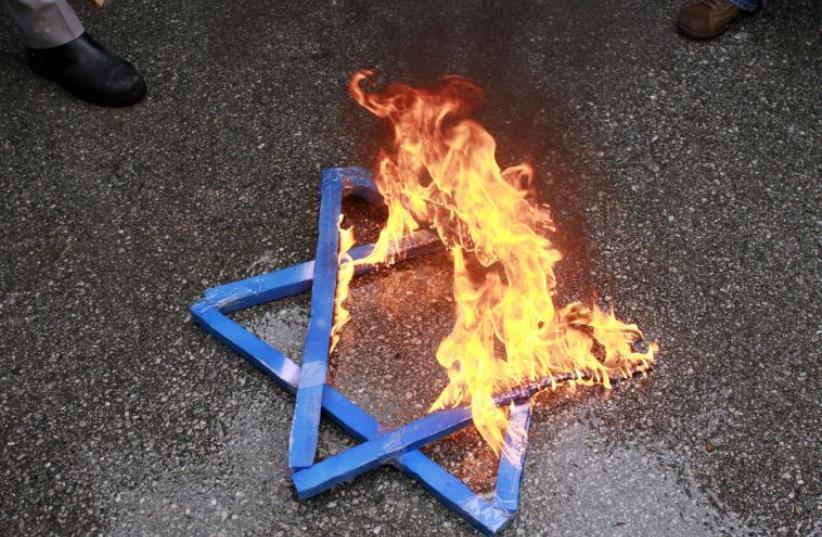 A Star of David burns in flames during a protest against Israeli attacks on Gaza in front of the Israeli embassy in Ankara
(photo credit: REUTERS)
Advertisement
This summer, I was zipping up my suitcase, ready to leave for an adventure in Italy. I had expertly packed the one allotted checked bag and was excitedly putting together my carry-on backpack. Suddenly, I heard my husband call out from the other room, “Don’t forget to cover up the Jewish star on your backpack with duct tape.” I was shocked at his words.I was given the backpack by an Israel education fellowship that had its logo in Hebrew next to a Star of David. My gut reaction was utter indignation. How dare my husband think that I would simply conceal my Jewish identity? I am not ashamed of who I am; I refuse to hide my religion or my love for Israel. His response? “Sometimes we need to hide who we are, to be safe.”As someone who works for StandWithUs, an International Israel education organization, I support college students across North America with training, inspirational programming as well as resources to fight the pernicious boycott movement on campus and communities against Israel. This means that confronting anti-Israel students or people who simply hate me for who I am is not new for me.Over the years, because I am open about my support for Israel, I have been called a “Zionist Pig,” “Terrorist,” “Murderer,” “Nazi” and many more outrageous and offensive names that I don’t care to repeat. I have been followed to my car by a horde of students shouting vile words that no one should have to hear. After facing down these anti-Israel students, in my mind, I was made of steel. I believed that hateful words and actions simply bounced right off me. I simply couldn’t reconcile that with the idea that suddenly I might need to hide who I am to protect myself because we were traveling abroad.After a lengthy back and forth, I finally conceded. I reluctantly used duct tape to cover up the Jewish star on my backpack, to cover up who I am, even though I knew that something was terribly wrong with this. I shouldn’t have to cover up my backpack. I shouldn’t have to be a proud Jew only when it’s safe.I shouldn’t have to worry that when I travel abroad, I may be targeted due to my religion and ethnicity. I shouldn’t have to consider any of these things... but suddenly I do.In Italy, I noticed more “duct tape,” more things that were shielded for safety. I noted the complete lack of security in the half-dozen churches we walked into; there were no guards or if there were they hardly gave us a second glance. In contrast, we were stopped at every synagogue, each with an overabundance of safety measures. At a place that should feel like home, that should give me a sense of security, guards checked our bags and we were questioned.At this moment, I realized that I truly felt nervous, more than ever when facing antisemitic hatred in America. I began to worry. “What if someone saw us leaving the synagogue?” “Did anyone overhear our conversation?” “Could we be in danger?” Back in the US, I understood that sadly, the world has not evolved as much as we wish. As an American-Jew, I live in country where I don’t fear being who I am, even when face-to-face with bigotry and hatred.I came to terms with the grim reality Jews living abroad currently face. This was a wakeup call for me and hopefully, for others. We must pay close attention to what is occurring around us or history will repeat itself. When we hear of terrorist attacks in Europe it should be shocking, not just another blurb in the newspaper. When we see synagogues and Jewish markets attacked and large groups of Jews fleeing from cities such as Paris due to fear of persecution and antisemitism, we should worry.We Jews who live in a place where we can share our thoughts and opinions freely need to stand up and take notice of those who can’t, before it’s too late. We need to educate ourselves on the facts, and then take action. If one overhears an anti-Israel conversation or reads a biased article in the newspaper, we must not merely shake our heads and do nothing.More of us need to be engaged.I have learned to have the tough conversations, and am teaching that to my students.We cannot put our heads in the sand and hope things get better. We have to call out antisemitism, we must demand that hatred and terrorism in all forms are equally denounced and we need to voice concerns whenever possible.We need to build connections with a diverse group of people who care about justice and are willing to fight against intolerance.I am heartbroken for all those who are living their Jewish lives in fear and under cover, only 70 years after the Holocaust. I never again want to feel afraid to be who I am, or to cover up my Jewishness with duct tape.Nobody should be – but they are.The author is national associate director of campus affairs for StandWithUs.