If we are not there to determine how this country looks in the future, someone else will be. 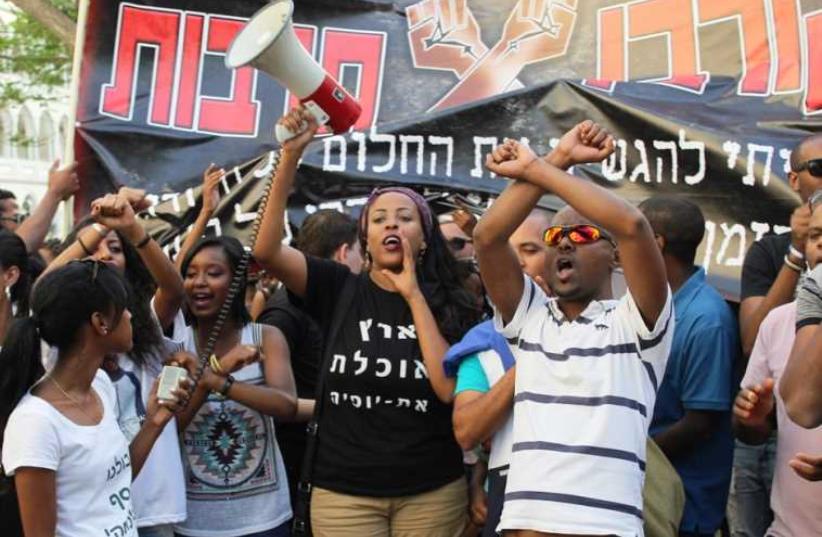 Demonstrators in Tel Aviv gather to protest racism and police brutality, May 18, 2015
(photo credit: BEN HARTMAN)
Advertisement
In April 2015, police officers were recorded vigorously beating IDF soldier Damas Pakada for failing to obey their instructions.Thousands of people demonstrated in the streets, the prime minister posed with the soldier, the police chief apologized and fired the officer and police volunteer involved – but the attorney general decided to close the criminal case against the officer. Fortunately, Pakada did not let the incident hold him back – last week he completed an IDF officers’ course.Taking responsibility, deciding not to give up and to climb the ranks, whether of the IDF or any other organization – this is the way to make social change. The real answer to racism, corruption, the cost of living and everything you think wrong in this country.In Israel this August, there is no conversation of young people that does not contain a sentence including desperation and a denunciation of the country. Yes, everything here is expensive and corrupt and slow and rude, and just incredible! Then comes the question: so what can we do? There are two typical answers: 80 percent say, “Well, what can you really do?” The rest would answer that “you have to do something, you can’t continue this way.”Those who identify with the second option know that here the story starts to get complicated.In the case of Pakada, thousands of civilians did something and took to the streets to protest against the discrimination the Ethiopians suffered.The problem with demonstrations, as all Summer 2011 demonstrators know, that eventually they end. Then usually one percent of the participants gather in the same café or pub where it all started, or at least start a WhatsUp group, and ask, “What do we do now?” Then there are those that offer to arrange the next demonstration and prepare an even bigger loudspeaker – they’ll even book Eyal Golan.There are those that offer to start over and this time become “unpleasant”; and there are those who will flood your Facebook with shares of every bad thing that happens in the country.And then there is Damas Pakada.I think Pakada represents those who understand that change must come from within.True, many have given up on this road. Especially after they find out that the day after they are released from the army, discrimination continues as usual. All in all, to attain the positions that allow people to create change takes years (decades); it requires concessions. But that doesn’t mean we should give up. Because those stubborn people that persevere will get there in the end.Let’s not forget, my friends: if we are not there to determine how this country looks in the future, someone else will be.The writer is a social activist and a partner in the NET-MED leadership project hosted by UNESCO, which is engaged in developing and promoting public policies for young people in the arenas of the media, the employment and the government.