The Ambassadors Travel to the Dead Sea event is only one of the many successful events that strengthen the diplomatic core in Israel. 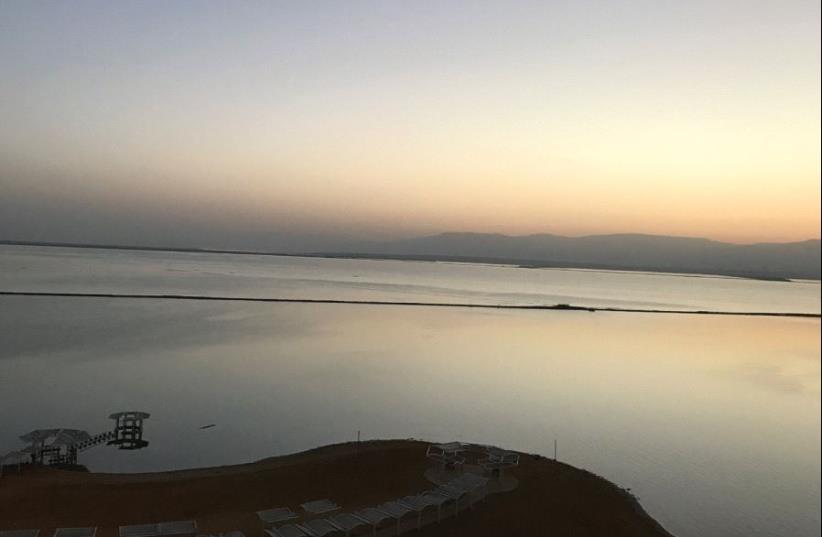 A view of the Dead Sea and Ein Bokek promenade at sunrise
(photo credit: SETH J. FRANTZMAN)
Advertisement
‘Before them extended the Dead Sea spread out like a deep blue mirror, their ears assailed by the thunder of the canal waters, led hither through tunnels from the Mediterranean, rushing down to the depths... On the northern shore, near where they stood, was a narrow, pointed strip of land extending behind the rocks over which the waters of the canal came thundering down. Below stood the power plant and beyond, as far as the eye could see, numerous large manufacturing plants. The canal had brought the Dead Sea to life!” – Altneuland by Theodor Herzl.2017 marks the 120th anniversary of the first Zionist Congress. Orchestrated and convened by Theodor Herzl, visionary of modern Israel and father of political Zionism, the congress can be regarded as the first act of modern Jewish diplomacy, with Herzl as the unofficial ambassador of the cause.Although Herzl passed away before seeing his lifelong goal come to fruition, his multifaceted legacy remains a powerful symbol. Beyond his mythic persona as the visionary of the state, his legacy permeates Israeli diplomatic culture. It may be a coincidence that many of the foreign missions in Israel are based in Herzliya, the city named after him, but the rich diplomatic community in this country could very well have something to do with Herzl and his values.Former ambassador, current president of The Ambassador’s Club of Israel (ACI) and dean of the School of Young Ambassadors, Yitzhak Eldan could not be a stronger admirer of Herzl’s diplomatic fervor. The values of constructive dialogue and meaningful engagement are foundational to Eldan’s 41 years of service. Although retired from the Foreign Ministry, Eldan continues to apply these values through his non-profit organization, the ACI.Eldan and his team of executives have dedicated themselves to developing the diplomatic culture and community in Israel by connecting foreign missions to one another but also to the State of Israel. Through commerce, tourism and culture the club brings foreign missions together, providing access to a network of diplomats, consul generals and charges d’affaires. Additionally, the club offers the opportunity for foreign missions to create an intimate relationship with the state and understand its geography, culture and beauty, in all its complexities, at a personal level.On May 23, during the visit of US President Donald Trump to Israel, the ACI, along with the Federation of Local Authorities in Israel, held one of its flagship events: Ambassadors Travel to Dead Sea. With a group of 11 ambassadors and their spouses, the club organized a day of touring and discussion on sustainability and development in the Dead Sea region with local municipalities. Mayor Dov Litvinoff of the Tamar Regional Council took part in greeting the delegation of ambassadors and discussed the phenomenon of the sinkholes in the region. Mayor of Ganei Tikva and chairman of international affairs at the FLAI Lizy Delaricha also addressed attendees and spoke on the importance of connecting diplomats to Israel.Before touring the natural wonders of the Dead Sea, a final panel of discussion on the current status of Middle East affairs was conducted by Ruth Wasserman-Lande, deputy director general of the FLAI. The panel approached issues through alternative lenses of analysis, focusing on Iran, Turkey and Egypt.After lunch, the ambassadors explored the Dead Sea from a multitude of angles. The trip introduced ambassadors to the natural phenomena of the Dead Sea and displayed the opportunity to expand the region’s potential for international tourism as they arrived at the Ein Bokek Beach and Ein Gedi. The ACI gave participants a technological and scientific experience by displaying the incredible work done on water sustainability with a tour of Dead Sea Research Institute.By day’s end, everyone in attendance left more knowledgeable on Israel, the Dead Sea district, its commercial opportunities, its natural wonders and technological advancements. The meaningful engagement from both ends combined to create a more understanding community of diplomats, better equipped regarding Israeli culture and commerce as a result of true Herzl-style diplomacy.The work of the ACI is seemingly never-ending. As new diplomats arrive and replace their predecessors, there is a constant need to update, educate and include new and old members to maintain the robust network of diplomats. The Ambassadors Travel to the Dead Sea event is only one of the many successful events that strengthen the diplomatic core in Israel.“I enjoyed the tour immensely. Can’t stop talking about it” – Ambassador of Zambia Martin Chungu Mwanambale.“I want to congratulate you and thank you for all the coordination and the friendly atmosphere which was created in order to receive us in such an awesome part of Israel” – Ambassador of Costa Rica Esteban Alfonso Penrod Padilla.