Disagree and debate – yes, fight and friction – no

We hear the story of Esther and give mishloach manot to one another this Purim, let’s all commit ourselves to doing everything in our power to remember that disagreements are just disagreements. 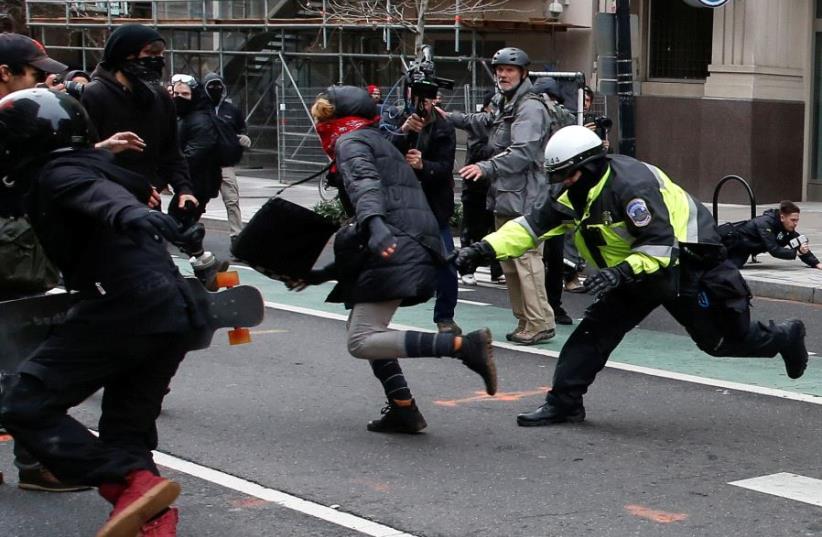 A police officer tries to tackle a protester demonstrating against U.S. President Donald Trump on the sidelines of the inauguration in Washington, DC, US, January 20, 2017.
(photo credit: REUTERS)
Advertisement
I just returned from a visit to the United States, and I’m still getting over the shock at the degree of polarization ripping America apart.The rhetoric and outright vitriol from all sides of the political spectrum has reached levels I never imagined I’d see happening in my country of birth: political leaders, journalists and regular citizens alike talking with hatred and disdain toward all those who disagree with them. Not surprisingly, the tension led to fisticuffs between opposing groups in the streets of California last weekend.We here in Israel must watch and learn what we cannot allow to happen in our political environment. A country like ours, which fights off external enemies on a daily basis, cannot afford to allow disagreements to become personal in nature. Preventing this from happening is critical for our survival as a country and as a nation, and that is one of the most important lessons and messages of the story of Purim that we commemorate and celebrate this weekend.When Haman, the prominent Persian minister, presented the “Jewish problem” to King Achashverosh, he called the Jewish people “scattered” and “separated” (Esther 3:8). Tradition teaches that this illustrates what was contributing to Jewish weakness at the time: We were not simply geographically apart from one another, we were fractured from within. The disagreements on religious and other matters made us vulnerable and susceptible to destruction.Queen Esther understood that this was the underlying symptom threatening our existence and ordered Mordechai to “go and gather together the Jews” (4:16). And this saved the day.The Scroll of Esther describes some the ensuing actions of the Jewish people in the singular instead of the plural to demonstrate their unity. It doesn’t say that they changed their opinions and started agreeing with each other. However, they recognized that despite their differences, ultimately they had only each other, and so they became unified on a personal and national level.In fact, the “Shoshanat Yaakov” song that we sing following the reading of the scroll on Purim emphasizes this point. “The rose of Jacob thrilled with joy and exulted when together they beheld Mordechai garbed in royal blue.” This is why Purim includes the unique mitzva of mishloach manot, in which we give gifts of food to friends alongside our charitable donations to the poor. The idea is to reach out and generate an atmosphere of unity in our communities.It may surprise readers, but I believe that Israeli citizens are the ones who must heed and apply this lesson, and they can actually learn this behavior from most of the state’s politicians. One of the greatest lessons I learned serving in the Knesset was to separate political, ideological and theological disagreements from the personal.It stunned me to learn how Knesset members from opposite extremes were able to put aside their differences of opinion and be best of friends. One example among many was the close friendship between the late minister Uri Orbach, of blessed memory, and MK Ilan Gilon. Uri was in the right-wing, religious Bayit Yehudi party. Ilan is a veteran member of the left-wing, secular Meretz party. Yet they were the closest of friends.And that wasn’t the exception – there were many times when two Knesset members could be seen screaming at each other about political issues in session and in front of the cameras, and a few minutes later I would see them sitting together in the parliamentary lounge acting as the best of friends.Our leaders fail in not demonstrating that behavior to the broader public and leading the country to be more unified. We can certainly use an Esther and Mordechai to recognize that we desperately need unity, and that leaders can help generate that atmosphere. But even if our leaders don’t issue this call to action, we, the people, must do so ourselves.Israel doesn’t lack for issues that can pull us apart, and with the scent of new elections in the air, those disagreements about security, the economy and religious issues will likely intensify in the months ahead. We cannot allow what is happening in the United States to happen here.So as we hear the story of Esther and give mishloach manot to one another this Purim, let’s all commit ourselves to doing everything in our power to remember that disagreements are just disagreements, and we must debate them democratically without allowing them to become personal. Doing so will insure that we will survive and thrive – and debate – for many years to come.The author is a former member of Knesset for Yesh Atid.