Echoing the past, heralding the future

Why is the shofar sounded at the end of Yom Kippur, and why do we sing about next year in Jerusalem? 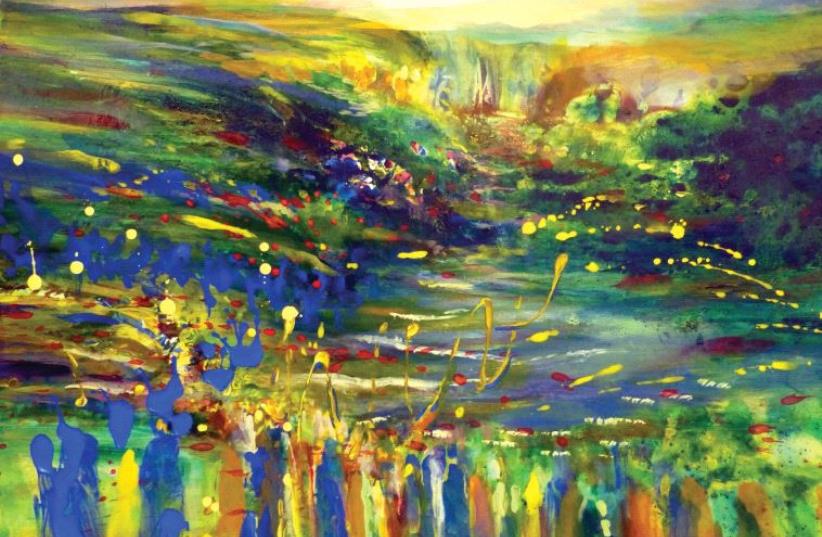 Painting ‘Behar’ by Yoram Raanan
(photo credit: YORAM RAANAN)
Advertisement
Yom Kippur is the culmination of 40 intense days of prayer and introspection. Historically, these days commemorate the time when Moses went back up Mount Sinai to receive the second tablets.During those days the shofar was sounded every day, as it is now, to rouse us to teshuva.Although the shofar is particularly associated with Rosh Hashana (which is called Yom Trua, “the day of blowing the shofar”), in the final moments of Yom Kippur it is blown one last time as we sing “Next year in Jerusalem.” Why, then, is the shofar sounded at the end of Yom Kippur, and why do we sing about next year in Jerusalem? This custom has a source in the shofar which was blown on the Yom Kippur of the jubilee year. (The 50th – i.e., jubilee – year follows seven cycles of sabbatical years.) This blast of the jubilee proclaimed liberty in the land, a time when all slaves were freed, and all properties were returned to their original owners.In this painting, titled Behar, see how the shofar blasts seem to be resonating freely throughout the verdant land. Their abstract shapes are suggested in the free movement of the paint as their vibrations rise in golden swirls, expressing the feeling of joy and liberation.This reflects the Hebrew word for “jubilee,” yovel, which means “to transport.”In this time, everything is brought back to its source in peace, justice and tranquility.Now we no longer have a jubilee, but we continue to sound the shofar every Yom Kippur to commemorate what once was, to celebrate our newfound freedom (from sin) and to express our hopes for the future. It is this hope for a peaceful future in Jerusalem that brings us to song at the end of Yom Kippur.The word yovel also has another meaning that has to do with the shofar blasts on Mount Sinai. With an emphasis on setting bounds around the mountain, Moses says that only “when the yovel sounds long, may the people ascend the mountain” (Exodus 19:13). All medieval biblical commentators understood this word yovel to mean the sounding of the shofar.One interpretation is that the jubilee is actually called yovel because of this shofar and that it was sounded on Yom Kippur. According to this interpretation, the phrase “when the yovel sounds long” refers to the shofar that Moses blew when he came down from the mountain with the second tablets on Yom Kippur.This signaled our return to divine grace and our rebirth as a nation.Although we usually think of Yom Kippur as the day of atonement for our personal sins, we also have to appreciate it as the day of atonement for the sin of the golden calf. After receiving the Torah on Sinai, the first tablets were smashed when Moses saw the people worshiping the golden calf.Our blowing the shofar on the first day of Elul commemorates that time thousands of years ago when Moses went back up the mount to receive the second tablets, returning on Yom Kippur. Every year, we blow the shofar during these 40 days as we relive that time of divine forgiveness.And at the end of each day, the shofar is sounded to celebrate the restoration of our relationship with God.The custom of blowing the shofar is also based on a midrash which says that at the conclusion of Yom Kippur, a heavenly voice (bat kol) proclaims: “Go and eat your food in happiness” (Ecclesiastes 9:7). Back in Temple times, horns were sounded when the people brought their offerings to Jerusalem on the Jewish festivals.In Hebrew, the word for sacrifice, korban, means “to get closer.” The sounding of horns and shofarot was an expression of the joy of drawing nearer to God.Now we no longer have a Temple and sacrifices; however, at the end of Yom Kippur, when we have offered our entire being, the sounding of the shofar is a tribute to the closeness we achieved during this awesome day.And finally, the shofar of Yom Kippur is a reminder of the great shofar that will be sounded in the future to herald an era of peace. The painting captures this idyllic time when liberty and freedom will be declared in the land. Blue strokes of paint meet with rich green and yellow hues of the land, representing Heaven and Earth meeting in a life that will be ideal. And so we sing in anticipation of hearing that great shofar that will usher in a time of world peace “next year in Jerusalem.”