Tying religion to the state invites the intervention of secular institutions, such as the Supreme Court or Knesset, to intervene in inherently religious matters. 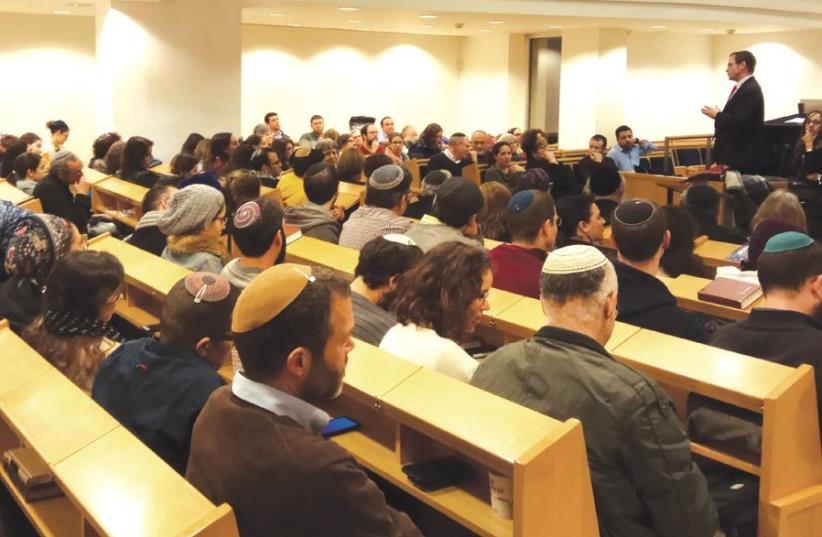 At the ‘Between the Ideal and the Real: Challenges in Halacha and Sexuality Before and After the Wedding’ event in Katamon’s Ramban Synagogue
(photo credit: YCT RABBINICAL SCHOOL)
Advertisement
Halacha strictly regulates Jewish marital practices. Only a Jew is permitted to marry another Jew according to Jewish law and there are only two ways to become a Jew: Be born to a Jewish woman or convert.Anyone who is unable to prove having been born to a Jewish woman or converted in accordance with Orthodox practice is unable to marry in Israel.Because halacha is the law in Israel when it comes to marriages, this strict adherence to the purity of the Jewish people is not just the business of rabbis and those who freely choose to lead an Orthodox Jewish life, but it also potentially impacts every single Israeli citizen (except those who happen to be Christian or Muslim).The Chief Rabbinate manages a blacklist of all the Israeli citizens who claim to be Jewish but were unable to prove it to the satisfaction of the rabbis. This list was obtained by ITIM, a religious services advisory and lobbying group, under the Freedom of Information Law. There were 6,787 people on these lists as of May 2017, and every year the number increases. Tens of thousands more have not even tried to marry via the rabbinate because they know they are not Jewish according to Orthodox criteria.We believe this situation must stop. The State of Israel should not take a stand either way on the personal choices of its citizens. If at one time it was believed the State of Israel could be a vehicle for promoting Jewish continuity and discouraging intermarriage, this is no longer the case. We live in an era in which old conceptions of hierarchy and authority no longer apply. People demand personal autonomy, whether it be the right of a homosexual couple to affirm their love for one another through marriage or the right of a Jew to marry a non-Jew. Dragging the State of Israel into the intricacies of halacha is bad for personal freedom and bad for religion.It is bad for personal freedom because it prevents people from exercising their right to choose whom they can marry.It is also bad for religion. Using coercive methods to try forcing adherence to Orthodox practice achieves the opposite result, triggering people’s need for autonomy and self-determination and their tendency to rebel. Instead of investing time and energy in policing the boundaries of religious adherence, religious leaders should be thinking of creative ways to reach the hearts and minds of the unaffiliated.Connecting religion to the state also encourages overly zealous religious leaders to exploit their powers in order to advance narrow agendas. These leaders think they are doing God’s will by protecting the purity of the Jewish people. That makes it impossible to reason with them. But they are using an ostensibly secular state’s formidable powers against a population that is predominantly non-Orthodox. Other, less stringent, interpretations of halacha are suppressed in the process.Also, tying religion to the state invites the intervention of secular institutions, such as the Supreme Court or Knesset, to intervene in inherently religious matters. Rabbis should have the right to interpret halacha in accordance with their conscience. But giving Orthodox rabbis a monopoly over marriages leads to pressure from the judiciary or legislature to curb those powers. Matters of faith should not come under the scrutiny of the state.The time has come to end the Chief Rabbinate’s monopoly over marriages. Those who care about adhering to the intricacies of halacha should, of course, have the right to investigate the Jewishness of their prospective spouse.But for many Israelis, love – the sharing of common goals and values, including living a Jewish life as defined by the couple, and a mutual willingness to support and cherish – is enough.It is time the state allow people to exercise what is a basic right in all democracies, the right to be married.