The 'Elor Azaria bill' would make it illegal to distribute footage of IDF soldiers and subject violators to up to five years in prison, and 10 years if national security was harmed 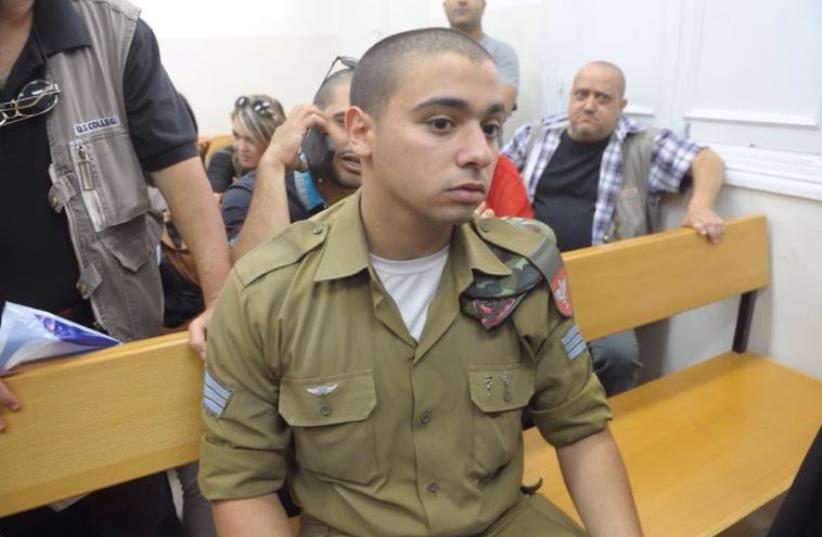 Elor Azaria
(photo credit: AVSHALOM SASSONI)
Advertisement
The bill introduced by Yisrael Beytenu faction chairman Robert Ilatov – which has infamously become known as the “Elor Azaria bill” – is on its way to be de-toothed and neutered. And it’s a good thing.The bill would make it illegal to distribute video or audio footage of IDF soldiers. It emerged following the high-profile case of IDF soldier Azaria, who was filmed in 2016 shooting and killing Abdel Fatah al-Sharif after the Palestinian terrorist had already been wounded by IDF troops.Videos of the incident filmed by a field worker for B’Tselem, the left-wing NGO documenting Israeli human rights violations in the West Bank, went viral and brought widespread international condemnation.They show Azaria shooting the incapacitated terrorist while he was lying on the ground – although Azaria claimed he shot in self-defense and feared a possible knife attack or concealed explosive vest.Ilatov’s bill, which would subject violators to up to five years in prison, and 10 years if national security was harmed, advanced in Sunday’s meeting of the Ministerial Committee on Legislation. According to The Jerusalem Post’s Gil Hoffman, the bill will be brought to a vote in a preliminary reading in the Knesset on Wednesday and will pass with the coalition’s support. But then it will be rewritten completely in Knesset committees, because the Attorney-General’s Office has deemed the bill in its current form to be illegal.The maximum jail sentence will be decreased to three years, and instead of referring to distributing footage of the IDF, the legislation will instead refer to preventing the military from carrying out its duties, which is already illegal regarding police activity.This narrows the window of what won’t be allowed and permits videos – such as the B’Tselem one of Azaria – to remain free to record and distribute.According to Ilatov’s illogical logic, the goal isn’t to prevent incidents like that involving Azaria to take place, but to keep them hidden and within internal security confines. In other words, what happens in the IDF should stay in the IDF.“The time has come to end this practice of left-wing organizations and activists, backed by foreign entities, having a free hand to videotape IDF soldiers while they fulfill their duty,” Ilatov said. “We have a responsibility to give our soldiers the optimal conditions for fulfilling their mission without having to worry that some left-wing organization will try to shame [them].”Unfortunately, it is shame – a well-deserved shame – one that Azaria deserved as a result of his actions which were revealed on the tape, and for which he was sentenced to a prison term before being released last month.Unlike those who claim that there are countless similar violations taking place within the IDF – the most recent example being snipers picking off innocent Gazans protesting on the border with Israel – we are confident that our army is moral and directed by exemplary officers who do their utmost to prevent aberrations.However, when aberrant actions are taken, it shouldn’t be the whistle-blowers who are blamed, as Ilatov’s bill would propose. We should take pride that our democratic process values transparency in protecting the rights of victims and prosecuting those in power who abuse such rights. That is Israel’s strength as a democracy and what makes it different than the other countries which surround it.There are plenty of organizations working in the West Bank who wish Israel harm and will go to extreme measures to portray the IDF as being a brutal oppressor. They should indeed be curbed with legal means, against any of their efforts to impede the army from carrying out its duties. But filming a soldier committing an illegal act – in the Azaria case, manslaughter – does not fall under that category.We applaud the Attorney-General’s office for seeing Ilatov’s proposed bill as a violation and illegal intrusion into that process. If the IDF is the most moral army in the world, as we are frequently proud to state, then we shouldn’t be afraid to let our actions speak for themselves without a veil of censorship or secrecy.