Block and strike; run if you can; if not, give them a knee to the groin and don’t stop until you can safely get away. 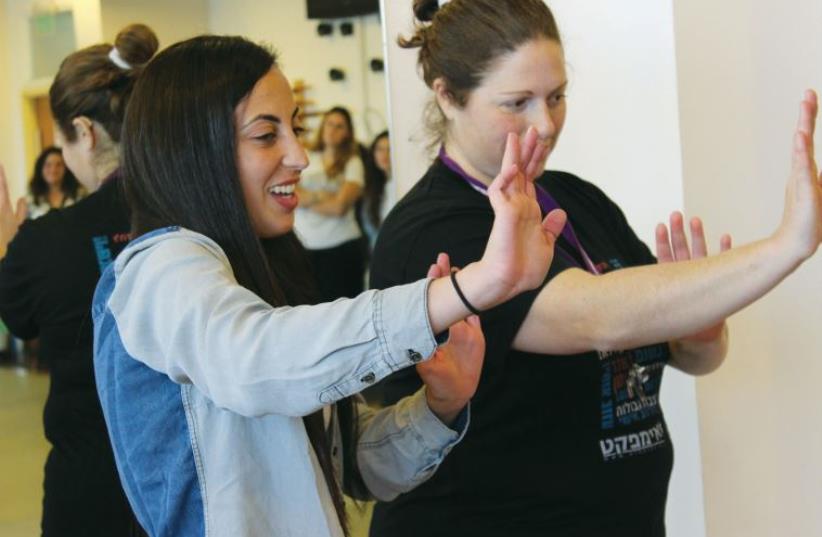 Participants at the El HaLev self-defense center in Jerusalem.
(photo credit: COURTESY EL HALEV)
Advertisement
Israel these days is a scary place. It’s not that the country hasn’t been scary before – but in the past month six people have been knifed to death and dozens wounded. However, it’s not the Israeli-Palestinian conflict I want to talk about, but rather a country that has gone into trauma mode. And that trauma mode has had one, seemingly small, but quite significant, positive effect: women who previously never gave a thought to self-defense training are coming out in droves to learn how to protect themselves.This isn’t to say men don’t need to learn to defend themselves. But here’s an interesting fact: Female humans are the only mammals I know who are not taught from birth to defend themselves.As a matter of fact, they are still taught, more often than not, to shut up and put up. In other words, not to defend themselves. El Halev, an organization founded to teach women and children self-empowerment, in normal times invests hours of staff time encouraging, counseling and supporting women who are considering taking a martial arts or self-defense class. The process of going from maybe to registering is enormous. This week, because of the situation, our phone has been ringing off the hook and our classes have filled instantaneously.I have a few questions. Why does it take a wave of terrorism for women to realize how vulnerable they and their children may be? Why is it only then that they take the time to take a three-hour class, the absolute minimum needed to learn something that might be enough to fend off an attacker – whether it be assault motivated by hatred of Israel, hatred of women or just a “love” of violence? And why we don’t teach ourselves and all of our children the tools to be safer all of the time? I would start with teaching them to say, “no, I am not OK with this” or “yes, this is what I want.” Certainly a better first step than learning defenses against terrorism. Using your mouth, believe it or not, is an integral part of self-defense. Words are the first, and sometimes only, step needed to stop abuse. Words so many women and children are socialized out of using, taught into silence that can sometimes only be broken by learning first to run or fight back.Learning to defend ourselves physically, I believe, is the gateway to empowerment, to standing up to your rights all day, every day. The Tel Avivbased Ethical Research Institute recently studied El HaLev’s IMPACT women’s self-defense class, and found that the graduates silenced themselves less after learning how to fend off an assault.One story stands out in my mind.A middle-aged women who works as a social worker took an introductory self-defense workshop recently. She called me a few days later, exhilarated by her ability to use what she learned.When a house guest expected her to wait on him hand and foot, and consistently spoke to her in a demeaning manner, she didn’t tell herself “this, too, shall pass.” Instead, she looked him straight in the eyes and said: “You will not speak to me that way.” And there are no words to describe the pride evident in her voice.This, to me, is the epitome of self-defense.We know that the level of violence, whether physical or verbal, against women anywhere in the world is epidemic.According to the World Health Organization one in three women will experience violence in their lifetime.More than 80 percent of the attackers are people known to them. And it doesn’t end there. A recent study commission by the Education Ministry found that of the approximately 12,000 10-14 year olds interviewed, 49% of the girls and 52% of the boys reported having been victims of some sort of sexual assault. Once you add the others types of violence, the numbers are just beyond comprehension.In our current wave of violence could you imagine someone suggesting that potential victims of violence should not have to defend themselves but rather, the attackers should learn not to be violent? Yet, this is a message given to women all the time. That’s without even dealing with the messaging that “it won’t help anyway” or “it will just make it worse.”Every woman, every girl, every person deserves to be able to be safe physically and to self-advocate. Society needs to absorb, understand and do something to change these horrifying statistics.Empowerment self-defense advocates and practitioners are doing just that and today, we have the research to back this statement.The world shouldn’t have to disintegrate into violence for things to change. Embracing empowerment self-defense as a primary prevention practice is a way to change the world.

The author is the CEO and co-founder of El Halev, MBA, 4th degree Judo black belt and mother of five wonderful young adults. El Halev, which means “To The Heart,” is a Jerusalem-based nonprofit NGO dedicated to individual empowerment and social change through martial arts and self-defense.
Advertisement
Subscribe for our daily newsletter