We must face the future with confidence that this conflict can and must come to an end. 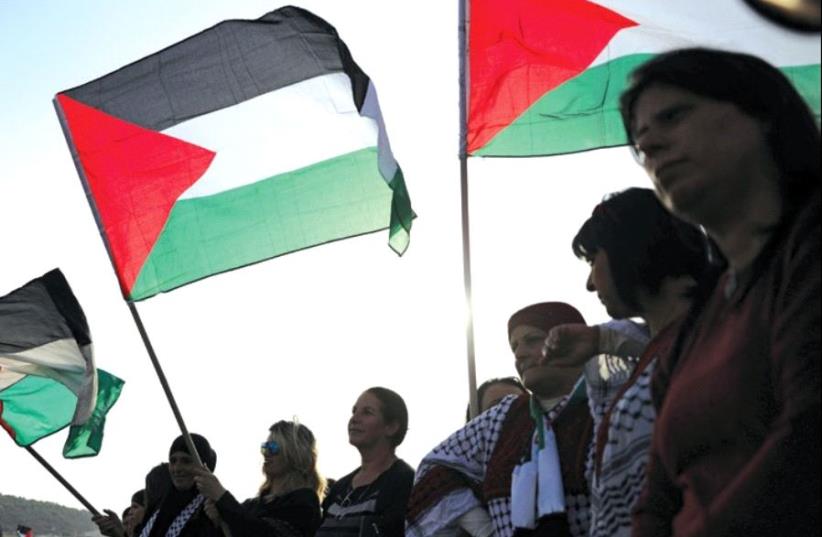 Israeli Arabs raise Palestinian flags at a Land Day rally, March 30
(photo credit: REUTERS)
Advertisement
There is great anticipation in Ramallah leading up to meeting between US President Donald Trump and Palestinian President Mahmoud Abbas set to take place May 3 – the day after Israel celebrates its 69th year of independence.In the early days of Oslo a Palestinian high-school principal called me on Independence Day to wish me a happy holiday. I was stunned and, very unusually, dumbfounded. I simply could not find the words to respond to him. As soon as I closed the line I realized what I should have said: “oukbalak” (in Arabic) or “bekarov etzlecha” (in Hebrew) – hopefully soon for you too! That was many years ago, but it is equally if not more relevant today.The Palestinian-American presidential summit in the White House on the day following Israel’s Independence Day is a very symbolic way for Trump to officially launch his Israeli-Palestinian peace efforts. The message is clear: it is time for the Palestinians to be able to celebrate their own independence day, following Israel’s and not in place of it.Even though in the press conference prior to his meeting with Prime Minister Benjamin Netanyahu, Trump said “one state, two states... whatever the parties decide is good for me,” now after his first 100 days and backtracking on every single campaign promise, Trump is reassessing everything he preached in the past. The two-state solution is just one additional issue on which he will make a course change and put himself and the United States back on the same tracks as the rest of the world. The only solution to the Israeli-Palestinian conflict, if solution means end of conflict, was and is “two states for two peoples.” That is exactly what he will hear, once again, from President Abbas, and that is what almost all of his senior advisers must certainly be telling him.However even if this is the case, we have seen far too many new American administrations take up the task or burden of trying to bring the parties to the table and to reach an agreement – one failing after the other. We have seen presidents like Bill Clinton, who really did give his time and energy, staking his personal reputation on the issue, but still not succeeding. We have seen secretaries of state like John Kerry, who, it seemed, spent more time in Jerusalem and Ramallah than in any other country, and he, too, failed.There are lots of reasons for the repeated failures, but ultimately the blame comes back home to the Israelis and Palestinians. It is also the people of Israel and Palestine who suffer from that failure, but of course the Palestinians suffer much more than do the Israelis.On this Independence Day, also marking 50 years of the binational, one-state reality that we are living, I find myself actually more optimistic than in the past several years. We are in both Israel and Palestine on the verge of an era of new leadership. Abbas is 82 years old and in the twelfth year of four-year term, with a divided Palestinian house and great dissatisfaction among the public. Netanyahu continues to demonstrate the distancing of himself from the real world into an increasingly absurd realm of self-delusion. The latest example of this being the snubbing of the German foreign minister because he met with some Israeli NGOs which are working against the occupation.Israelis are becoming increasingly dissatisfied with Netanyahu and potential new leaders are beginning to emerge. The Israeli government coalition is also beginning to show internal cracks that will gradually open wider and bring us closer to new elections. While Netanyahu continues to feed the Israeli public with his magnified threat perceptions, running a regime based on fear, the genuine threat to Israel is the continued rule of Netanyahu himself and his ongoing attempts to narrow the parameters of Israeli democracy.Netanyahu’s attacks against the media, against the independence of the courts, against the police, against the European Union, against J Street, Israeli peace and human rights NGOs and basically anyone who disagrees with him is not only pushing Israel into a corner, they are also pushing the Israeli public to understand that Netanyahu’s political career must come to an end. It is time for a regime change in Israel, and it is coming.The convergence of interests within the region against the genuine threats that we all face from Iran and from Islamic State will lead to a coming to terms between Israel and Palestine. There are no alternatives for Israel, nor for Palestine, if both want thier own territorial expression of identity within the territory both sides claim. The land between the river and the sea will be partitioned into two states – 70 years too late, but equally relevant today as it was then. The two-state solution will remain on the table, and will once again be negotiated. All of the issues in conflict will be there, and solutions for all of them are possible.Yes, it may be more difficult today than it was 10 years ago, but we should also be 10 years more intelligent in resolving those issues. We have also lost our naiveté about peacemaking and that will in fact make a stronger peace. We must face the future with confidence that this conflict can and must come to an end, and with that confidence, we must all work to dispel the fears and myths created by our own demagogues who have led us down the wrong and dangerous path for too long. Happy Independence Day! (to us and to our neighbors).The author is founder and co-chairman of IPCRI – Israel Palestine Creative Regional Initiatives.www.ipcri.org.