Encountering peace: There are no walls high enough

We have been too long trapped in a mutually harmful stalemate. 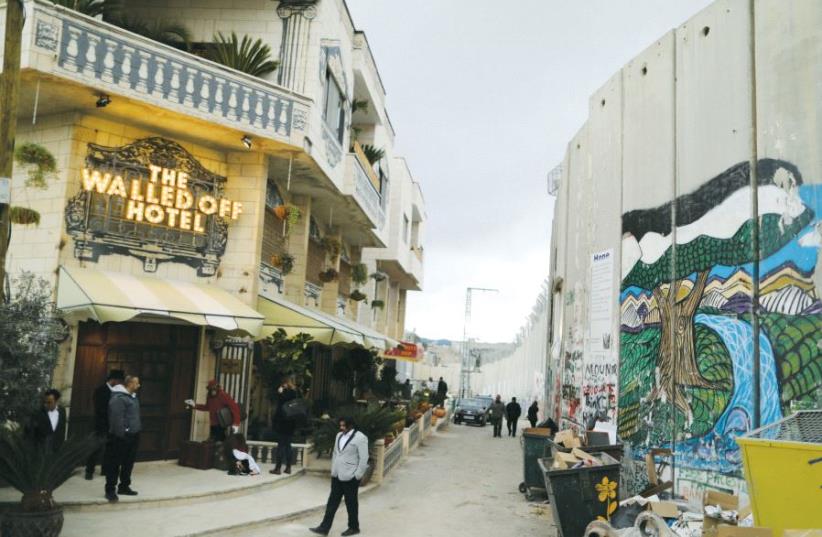 People stand outside the Walled Off Hotel, which was opened by street artist Banksy, in Bethlehem
(photo credit: REUTERS)
Advertisement
Separation from the Palestinians, as some refer to it, or “getting a divorce” as others call it – such ideas are smoke screens generated to gain support and votes, yet are in direct opposition to logic and Israel’s interests. They are at best euphemisms – sort of like calling a toilet a “rest room” or “water closet.” In reality what we need to speak about and refer to is ending Israel’s control over the Palestinian people and denial of their self-determination in a state of their own next to Israel. Or more bluntly put: ending the occupation.But that is only part of the whole picture. The whole picture also refers to the recognition of the imperative to engage the Palestinians, but on new footing, with a totally different basis than that we have known. Separation behind walls and fences is a recipe for continued conflict. There is no realistic solution to the Israeli-Palestinian conflict that does not involve serious and significant cross-border cooperation between neighbors.The failure of the peace process that began with the Madrid conference in 1991 has led to mutual blaming among Israelis and Palestinians regarding the lack of a partner for peace on the other side. Israelis and Palestinians are not foolish and they are not blind. The realization of the lack of a partner for peace is made evident to Israelis and Palestinians almost every day. The failure of the peace process belongs to both sides and neither side can easily escape responsibility for the bad reality that we are all living. Placing blame is easy – much easier than taking responsibility for the failures and for the loss of hope that peace can be achieved. It takes two to tango, and it also took two sides to fail at making peace.The conclusions that leaders and common people (with the help of the leaders) have come to: boycotts, anti-normalization, incitement, non-recognition of existence and basic rights, land confiscation, house demolitions, arson, incarceration, violence, terrorism, etc., have created and sustained for a long time the mutual sense that the best we can hope for is to never see the other side again. Both Israelis and Palestinians would be very happy if the people on the other side were to simply disappear and be out of their lives.That is never going to happen. For the foreseeable and the more distant future, Jews and Palestinians, in almost equal numbers, are going to live on the land between the River and the Sea. It doesn’t really matter if they call if Palestine or Israel – both of them are here to stay. That is not going to change and neither side has the power or the lack of morality necessary to bring about the removal of the other.We can either share the land in one state – which neither side wants, or we can find a way of enabling two states. In both cases, not only is the physical existence of the other a given, axiomatic reality, so is the indisputable necessity to change the relationship between the two peoples from animosity and conflict into cooperation and mutual support.The ending of the conflict is much more complex than simply ending the occupation and creating a Palestinian state next to Israel. The easy part of that is reaching agreement on all of the issues in conflict. The difficult part begins the day after the agreement is signed. Changing the relationship which has sustained the conflict is a long process which begins with the realization that we must cooperate across recognized borders on almost every aspect of life. That cooperation begins with border management and security and includes the “easy” stuff like environment, water and energy, economic development, trade, telecommunication, science, hi-tech, academic research, media, culture, education, language, physical planning, conservation and use of natural resources, wildlife protection, agriculture and much more. We cannot simply build higher walls and stronger fences and be rid of the other side and expect that anything good will emerge.Politicians who shout out empty slogans – “separation,” “us here and them there,” “anti-normalization” and so on – are part of the problem, not the solution. They are shallow and hollow, reek of denial and preach racism, enhance fear and lead us to hate. They are at the inner core of fostering a culture of hate and fear – far from the exemplary societies that we are capable of creating.We need politicians and leaders to become statesmen with integrity who look their people straight in the eyes and speak the truth – without fear and without fear-mongering. Israelis and Palestinians cannot escape each other and as long as they continue to seek the suffering of the other side, they will deny their own side a better reality.We have been too long trapped in a mutually harmful stalemate. I don’t know how it benefits Israelis for their Palestinian neighbors to suffer. I don’t know how it benefits Palestinians for their Israeli neighbors to suffer. It makes no sense and for the benefit of both sides we need a new mindset from which we will be able to see that taking actions today which actually improve our reality will also make it easier to reach agreements on the issues which we are in conflict over. Rather than a mutually dehumanizing process, our leaders could actually lead us on a path of mutual humanization. That will begin to happen when we have leaders who speak openly about cooperation, not boycotts and separation walls. That will happen when civil society on both sides works on building bridges and tearing down walls.The author is the founder and co-chairman of IPCRI, Israel Palestine Creative Regional Initiatives. www.ipcri.org.