Let me tell you about my friend Martha de Laurentiis, whose death was announced in the movie industry press in America and Italy.

This week I learned that a faraway friend Martha died in California. Losing a dear friend is always sorrowful, but the forced distancing during the pandemic exacerbates the pain and helplessness.

With the barriers to travel, flying to the US hasn’t felt like an option for me since the coronavirus changed our world. “Out there” feels so far away. My friend died not of COVID-19, but from brain cancer. She fought cancer before, emerging with the help of excellent medical treatment and her resilient character.

I visited her in the hospital. I knew she was sick again and planned to come as soon as the pandemic was over. But of course, the pandemic isn’t over and it wasn’t over in time for me to do the simple but powerful deed called bikur cholim.

So I write this today in the memory of my friend, and for all of our friends and loved ones whom we are unable to bring a cup of tea, fluff a pillow or elicit a smile by just being near. Bikur cholim isn’t a zoomable mitzvah.

Let me tell you about my friend Martha de Laurentiis, whose death was announced in the movie industry press in America and Italy. She was an unlikely buddy for me – the distance from Jerusalem to Hollywood is great, not just in miles. 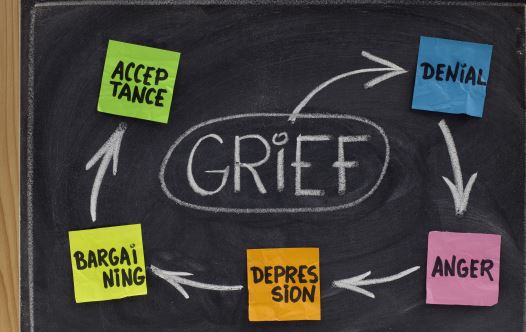 The 5 stages of grief (credit: INGIMAGE)

She and her late husband Italian film legend Dino de Laurentiis were top-tier movie producers who lived in a world of stars and Academy Awards. Her credits include films and the acclaimed NBC series Hannibal. But whenever we met up with her, she made us feel like the most valued persons in the world. She was a unique mix of Hollywood glamor and hometown girl, a beauty queen with sharp intellect and gifted at friendship.

We met after one of my husband Gerald Schroeder’s books, Genesis and the Big Bang, came out in Italian. Dino, a Neapolitan, self-made movie mogul born to a family of pasta industrialists, phoned him to talk Bible and movies. We wound up as script advisers on several films, once unglamorously running an electric cord down the hill to neighbors when a rare Jerusalem snow storm turned off our electricity.

WE MET first in person at their home. Martha and Dino and their two daughters, now Ivy League-educated actresses Carolyna and Dina De Laurentiis, lived on one of the highest hilltops overlooking verdant Benedict Canyon and Beverly Hills. As in the movie, the gate swings wide open to a circular driveway and a swimming pool.

Always waiting with a giant hug was Martha, no matter how many scripts to read sat on her table. Born in Lancaster, Pennsylvania with a childhood in Piqua, Ohio, this stunning former state Junior Miss beauty got more beautiful with the years.

She was working in the accounting department of Dino’s production company when he spotted her, and then came back into the room because, in his words, he’d thought an angel was sitting at her desk focused on production ledgers.

When their courtship began, she was open about her worry that others would see them as a cliché: a younger blonde on the arm of a distinguished older man. But for the decades they were together, they shared an idyllic marriage and work partnership. She learned Italian and became a support to the family through their trials and triumphs.

When Dino died in 2010 at age 91 Martha took over the leadership of their production company. Still, she was never too busy to spend quality time with friends, and as the condolences poured in, her talent for reaching out and interest in others from so many different backgrounds became clear.

The first time I slept over as their guest in their mansion, Martha showed me which button to press if I was hungry at night. I assured her that I wasn’t a midnight nosher, and she winked with her characteristic good humor, “Sometimes guests like to push the button just because they can.”

She was always solicitous of our kosher dining requirements.  A breakthrough day came when they assured me that no one would dare use the pasta pot for anything other than pasta. Sometimes we sat on high stools in an LA kosher deli. We met when we could, in California, once in Israel where she came for a friend’s daughter’s bat mitzvah, and in Italy.

WE WERE privileged to celebrate Dino’s 80th birthday on the island of Capri. Not our average party. We took the boat across the ​ almost-turquoise Tyrrhenian Sea. The party took place at the Villa Eremo, the family home of a family friend, with its painter’s dream view of Capri’s iconic Faraglioni rock formations. Amid pines and palm trees, bougainvillea and wisteria, lemons were amusingly tied by string to the greenery.

Tables were set for 300. We were seated at a table with industry luminaries. The person to my left had won an Oscar for costume design. Fireworks went off, shot skyward from the deck of a boat tethered on the south side of the Gulf of Naples, not far from where Dino grew up. When she learned that one of our sons had just completed his service as an IDF officer and was traveling in Italy, of course he was invited too. That was Martha, with her talent for making people feel at home.

These are among memories I would have liked to have reminisced about at her home or at her bedside, while she would also tell me of the children, her beloved first grandchild Arlo, and her newest projects, and ask about our work and family—always offering good advice. She loved Israel. She died at 67 surrounded by her family.

Instead, all I can tell you Martha, up in heaven, is that I will always treasure our friendship and your humility, and your beauty inside and out.

How to honor a friend’s memory? Martha’s step-granddaughter is the TV celebrity chef Giada de Laurentiis, who marked what would have been nonno Dino’s 100th birthday with a dinner with all his favorite foods. So, I’m making an at-home movie festival in Martha’s honor: ordering some of the famous family films like Serpico, Breakdown and Hannibal, and cooking pasta, maybe a de Laurentiis favorite of fusilli with frozen pea pesto and mozzarella.

And I’ll try to emulate the sunlight she was never too busy or too important to spread. ■