So much for the desert-driven delusions of the past. 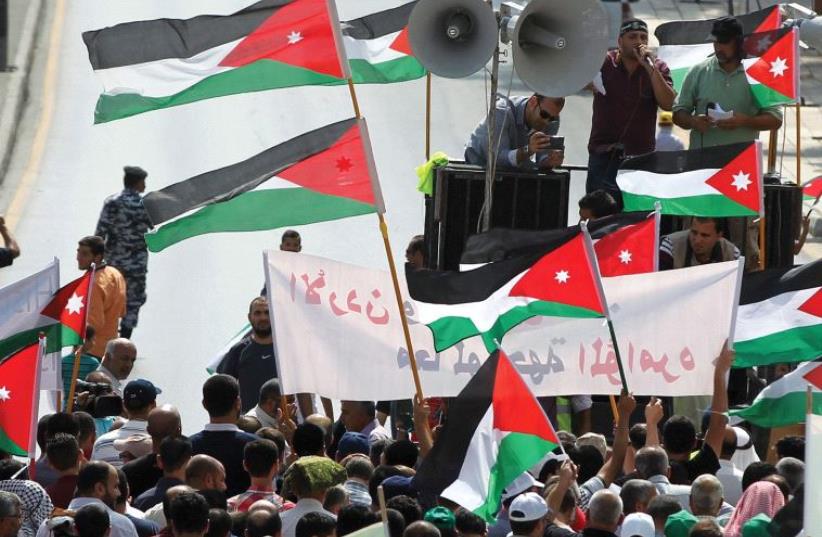 PROTESTERS IN Jordan hold Jordanian and Palestinian flags as they march in protest against Israel.
(photo credit: REUTERS)
Advertisement
Yesterday marked the 22nd anniversary of the signing of the Israel-Jordan peace treaty, an event heralded at the time as a historic breakthrough, one that would bring about a warm and lasting reconciliation between the two countries for generations to come.So much for the desert-driven delusions of the past.For while the accord has certainly resulted in mutually beneficial arrangements, such as the 15-year gas deal signed by Jerusalem and Amman last month, the sad fact is that although Jordan may be Israel’s neighbor, it isn’t really much of a friend.Take, for example, the ongoing soap opera involving UNESCO, the UN agency that has spent a considerable amount of time over the past few weeks trying to deny the undeniable by repudiating Israel’s historical, spiritual and emotional ties to Jerusalem.When the organization affirmed a resolution last week labeling the Temple Mount a Muslim shrine, our Jordanian pals hailed the decision as a “victory” and unashamedly claimed credit for having drafted the offensive decision.According to the kingdom’s official Petra News Agency, the text approved by UNESCO “was prepared by the Jordanian Ministry of Foreign and Expatriate Affairs, and presented by the Jordanian mission to UNESCO in coordination with the Palestinian mission.”The resolution, which was passed under the heading “Occupied Palestine,” was labeled “historic” by Jordan’s Minister of State for Media Affairs Mohammad Momani, who went on to parrot claims by Muslim extremists that Israel was endangering sites such as the Dome of the Rock and the Aksa Mosque, both of which sit on the Temple Mount.Needless to say, this is hardly the way a true partner in peace should be behaving.Indeed, Jordan repeatedly and habitually seeks to undermine Israel and its legitimacy at just about every international forum possible.Two years ago, for example, the UN Security Council debated a diplomatically dangerous resolution that demanded a complete Israeli withdrawal to the pre-1967 lines by the end of 2017 and called for the establishment of a Palestinian state. Guess which country submitted the harshly anti-Israel draft? Fortunately, the resolution failed to pass when it did not garner the required nine votes, but that didn’t stop Jordanian UN ambassador Dina Kawar from stating, “The fact that this draft resolution was not adopted will not at all prevent us from proceeding to push the international community, specifically the United Nations, toward an effective involvement to achieving a resolution to this conflict.”In other words, Amman would continue to try to coerce the Jewish state in the international arena.And that is exactly what Jordan’s King Abdullah has frequently done, lambasting and threatening Israel in often ruthless terms.Two years ago, the unelected monarch accused Israel of “slaughtering our children in Gaza and Jerusalem every five minutes.” And just last month, while speaking at the UN General Assembly in New York, he publicly warned Israel in ominous terms that if it does not “embrace peace” and accept the establishment of a Palestinian state, then the Jewish state will “eventually be engulfed in a sea of hatred in a region of turmoil.”How sweet of him.But hostility toward Israel and Jews isn’t confined to the corridors of power in Jordan. There is plenty of evidence to suggest that it is a widely-held sentiment among the vast majority of the Jordanian public.According to the ADL Global 100 survey of worldwide antisemitism, which was conducted between July 2013 and February 2014, a whopping 81 percent of Jordanians hold antisemitic views. Two-thirds of Jordanians surveyed said they believe that Jews are responsible for most of the wars in the world, while even larger majorities assert that Jews have too much control over global affairs, the media and the business world.And there is widespread support for extremism among the Jordanian populace.A 2014 survey conducted by Jordan’s Center for Strategic Studies found that nearly 40% of the Jordanian public does not consider Islamic State (ISIS) to be a “terrorist organization.”Another poll, conducted by the Washington Institute, revealed that 72% of Jordanians have a “positive” or “very positive” view of Hamas, which was the highest figure observed in any of the six Arab countries surveyed.Of course, compared to some of the neighboring countries in the region, Jordan looks like a relative island of stability, one that has thus far succeeded in staving off a descent into Islamist jihadist chaos. But it would be foolish to view Jordan as a friend or ally, because it simply isn’t. It is a country with which we are at peace, but it is a chilly peace that appears to be growing colder with each passing year.