Germany’s Jews: A chronology of awareness and fear

Foreigners unaffected by concerns of political correctness and “welcome euphoria” found it easier to point out the evident threat of increased anti-Semitism in Germany. 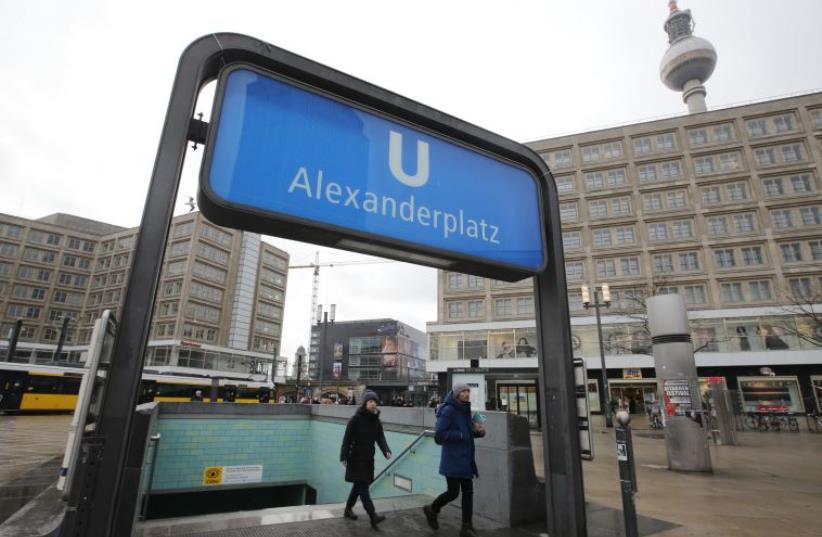 People leave the subway station at Alexanderplatz in Berlin, Germany February 4, 2016
(photo credit: REUTERS)
Advertisement
In September 2015 the German government, headed by Chancellor Angela Merkel, opened the country’s borders to a massive wave of predominantly Muslim refugees. This poorly thought-through policy has already given rise to many mainly negative consequences, which appear to be here to stay. This has led to a greatly increased sense of insecurity among German Jews, not least because they spoke of their concerns relatively early and were not listened to.Initially Jewish leaders had to tread very lightly in expressing their unease, due to the politically correct atmosphere of the “welcome euphoria” which prevailed in Germany at that time. Their concerns stemmed from their deeper understanding of the dangers presented by an unprecedented massive influx of Muslims from countries where extreme anti-Semitism is rife.Early in October, Josef Schuster, the head of the German Jewish umbrella body Zentralrat der Juden in Deutschland (Central Council of Jews in Germany), expressed his worries in a meeting with Merkel. He said that among the people who seek refuge in Germany, many come from countries where Israel is considered the prime enemy, pointing out that these people have been brought up to hate Israel and frequently transfer this resentment to all Jews. Jews are therefore concerned about the rise of Muslim anti-Semitism in Germany.Schuster however said that the Jewish community welcomes the arrival of refugees.Subsequently, Levi Salomon, a German Jewish anti-Semitism expert, told the British Daily Express that Jew-hating Nazi ideology and the hatred of Israel had been at the heart of the ruling Ba’ath parties in both Syria and Iraq for decades. He added that therefore it must be assumed that the majority of Syrian refugees are anti-Semites.Lala Susskind, the former head of the Berlin Jewish community was quoted saying that “we don’t believe our fears are being taken seriously by politicians.” The paper also mentioned that in Germany “anti-Jewish crimes rose to a five-year high in 2014 with 1,596 recorded hate crimes against Jewish people, more than in any other EU state.” Stephen Kramer, a former secretary general of the Zentralrat also expressed the view that politicians do not take Jewish worries seriously.Toward the end of November, the German “welcome euphoria” was already on the wane. Schuster could thus dare to make some concrete demands. He asked that a limit be imposed on the number of refugees admitted and requested more stringent border controls. Schuster also pointed out challenges in the integration of the refugees, warning, almost prophetically as it turned out, of increasing risks for homosexuals and women.Schuster showed far more sensitivity and insight than the German political system, police and media with regard to these problems.He spoke amid initial reports of violence against homosexuals. The violence increased, and 95 complaints of violence were submitted to the Lesbian and Gay Berlin- Brandenburg Association (LSVD) from August-December 2015 by homosexual refugees, victims of beatings, sexual attacks, or insults, which took place mainly in refugee centers. Furthermore, his warnings came over a month before the unprecedented sexual assaults on New Years’ Eve in a number of cities in Germany and other countries, perpetrated by large groups of refugees from Muslim countries.Foreigners unaffected by concerns of political correctness and “welcome euphoria” found it easier to point out the evident threat of increased anti-Semitism in Germany.Rabbi Abraham Cooper and I wrote at the end of October: “Jews are left to wonder whether anyone else will express concerns that Germany could be welcoming some among the new arrivals who take the Koran literally and believe that Jews are pigs and monkeys. In the 20th century, dehumanization of Jews was a centerpiece of German Nazi ideologies, which classified Jews as vermin or bacteria and paved the way for the Holocaust.”In December Jeffrey Herf, a leading American professor of modern European history, noted that Germany is a “country which still is influenced by its role in the murder of the Jews in Europe. Germany now accepts victims of the Assad regime and the Islamic State who both would love to destroy the Jewish state, Israel, if they only could.”By mid-January over a million refugees, mostly from Muslim countries, had entered Germany, and the situation had significantly worsened. Hamburg Jewish community spokesman Daniel Killy said that Jews were in increasing danger due to Germany’s deteriorating internal security.He mentioned the disintegration of state power, excesses of the extreme Right, the loss of political credibility, and the tremendous fear of naming Islamism as such. Killy concluded that Jews are no longer safe in Germany.A few days later Salomon Korn, Schuster’s deputy at the Zentralrat, mentioned that a Syrian and an Afghan refugee had attacked a kippa-wearing Jew on Fehmann island. He added that “children in Arab countries are indoctrinated like children in Third Reich. We should not accept the illusion that we can integrate these people in our society.” Yet Korn stated that he still fears the growing right-wing violence even more.The new democratic Germany had succeeded of attracting immigration of Jews over the past decades, mainly from Russia. Germany’s current estimated 230,000-270,000-strong Jewish population, seen until now as an expression of a much-desired normalization of Germany, are no longer certain of their security.The irresponsibility of Merkel’s open borders policy has ramifications throughout German society, and increasing concerns of the Jews over the past few months serve as one significant indicator among many.Jews are concerned, and given the past and present rightly so, that their fears may be realized in the not too distant future in increased incidents of physical aggression against the Jewish community. This due to a policy which albeit not deliberately malicious as in the past, has been extremely negligent.It appears that local Jewish leaders and commentators abroad who have not been blinkered by political correctness have demonstrated an early sensitivity and awareness to the risks of the current refugee crisis which the German government seems to lack. All it has contributed so far are some words expressing understanding of Jewish concern.

The author is emeritus chairman of the Jerusalem Center for Public Affairs. The author was given the Lifetime Achievement Award by the Journal for the Study of Antisemitism, and the International Leadership Award by the Simon Wiesenthal Center.