GLOBAL AGENDA: ‘Time’ is up

Although it relates only to government debt, with household and corporate debt mentioned only in passing, it leaves no doubt that the US is indeed insolvent. 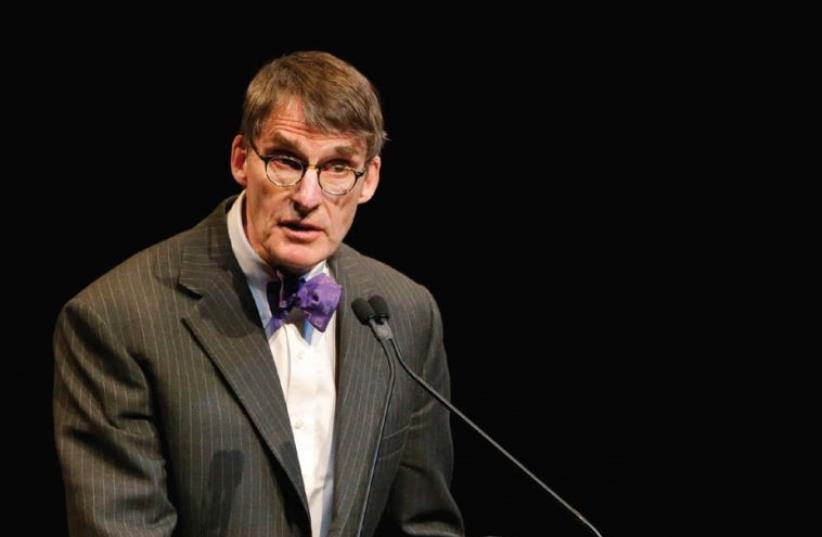 JAMES GRANT, founder of ‘Grant’s Interest Rate Observer,’ speaks at the Sohn Investment Conference in New York in 2014.
(photo credit: REUTERS)
Advertisement
"The United States of Insolvency” is the graphic title of a sprawling article in Time magazine’s April 25 issue. That in itself is significant, as is the clear and punchy content of the piece – which delivers the chapter and verse detailing why the headline is not imaginary or threatening, but rather factual and inexorable.Although it relates only to government debt, with household and corporate debt mentioned only in passing, it leaves no doubt that the US is indeed insolvent.This is a remarkable article to find in the mainstream media. Of course, in the blogosphere, it is everyday fare, with both the data and the analysis well-known and almost taken for granted. But until recently, you would not have come across that kind of thing in Time or its peers. Yet that is not the whole story.Far more remarkable is the fact that this piece was not written by the magazine’s own staffers, who would have balanced the view that the US is irredeemably insolvent with soothing words from officialdom and maybe some mainstream economists. Rather it was written by James Grant – a name that surely means nothing to at least 99 percent of Time readers around the world.Yet in financial circles, Jim Grant is very well-known. As noted in the Time piece, he is the editor of Grant’s Interest Rate Observer, an innocuously named newsletter which is both highly respected and yet extreme in terms of its views. Grant is, in fact, a leading “gold-bug,” a strong and consistent promoter of the view that the central banks have led and are leading the global economy to collapse via endless printing of fiat money – and that only a return to sound money, backed by gold or silver and supported by a balanced budget, will return the US and the world economy to sustainable prosperity. Grant says all these things in the Time piece, in his usual coherent and persuasive style.So here’s the point. What is amazing is that a pillar of the mainstream media, with impeccable liberal credentials, gave a platform to a known radical – five years ago, he would have been labeled a gadfly at best and a crank at worst – to lay out his views, with no attempt at “balancing” them. This means that the mainstream media is increasingly persuaded that the policies pursued by governments and central banks since the Great Recession have failed – and that they are therefore ready to listen to other approaches that hitherto would have been dismissed out of hand.This is happening even as stock markets, in the US and elsewhere, recorded their strongest-ever rebound in the first quarter of this year and as during this past week the main US indices advanced toward new all-time highs.Even laymen are asking themselves how this can be happening, in the face of declining corporate profitability and falling sales, mass firings and deflationary pressures stemming from excess supply in most areas.Their answer, bolstered by a seemingly endless stream of evidence from admissions by the world’s biggest banks that they manipulated virtually every major market, from interest rates to gold, is that the entire financial system is rigged and their prices no longer reflect fundamentals, i.e. true supply and demand. In other words, the process whereby the credibility of central banks has crumbled is now reaching the mainstream.Meanwhile, in the professional world, almost every week another leading analyst “comes out of the closet” and expresses deep concern over the way things are being mismanaged. The latest example is David Rosenberg, whom I have quoted here many times over the years.“Rosie” was a leading bear before and after the crash of 2007-09 – he made his name by being bearish whilst working for Merrill Lynch – but he threw in the towel a few years ago, in terms of his position vis-à-vis stock prices, effectively admitting that so long as central banks kept printing, the markets would keep rising.A couple of weeks ago, however, he opened his commentary by noting that “In a truly seminal speech on March 29, Janet Yellen used the title, ‘The Outlook, Uncertainty, and Monetary Policy.’ I have been in this business for 30 years and have never seen a central bank chief slip the word ‘uncertainty’ into the headline.” In fact, he noted, the Federal Reserve chief “invoked the term no fewer than 10 times to describe the domestic and global macro and market backdrop,” and he concluded: It begs the question: What has gone wrong? Jim Grant and his camp claim to know exactly what’s gone wrong, but for the Keynesian mainstream, this is a very difficult, even wrenching, experience, as Rosenberg’s full piece shows. But after years in which that debate about policy and economic philosophy has been conducted far from the public eye, it is now front and center.The general public is not interested in intellectual debate, nor has it been convinced by some abstract arguments.Rather – as illustrated by the wider phenomenon of which Trump and Sanders (and Farage and Le Pen, et al) are both the figureheads and leaders – the masses are now demanding new ideas from new people, because the old ones have proven incapable of delivering on their extravagant promises.