The full significance of an exhibit in Jerusalem dedicated to Hadrian can only be understood when one considers Hadrian’s relationship with the Jews and the Land of Israel. 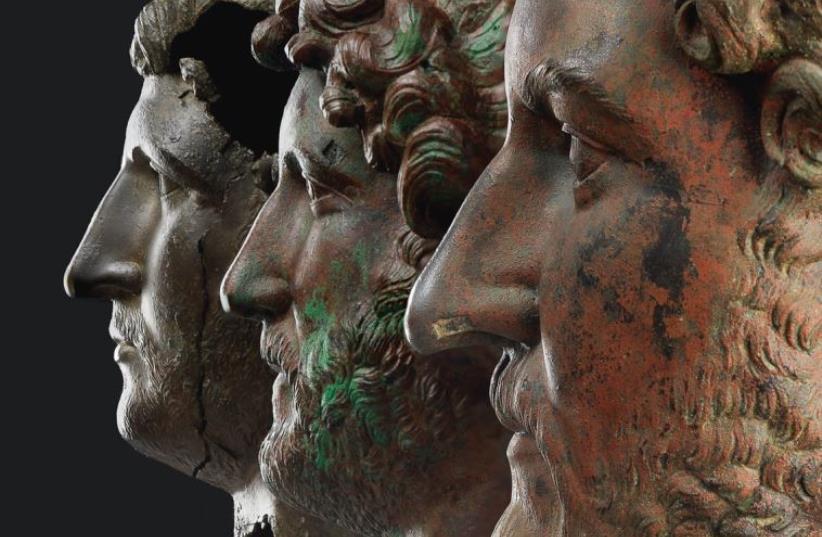 Roman emperor Hadrian commands an imperial audience at the Israel Museum
(photo credit: ISRAEL MUSEUM)
Advertisement
In the final weeks of 2015, a highly significant exhibition opened at the Israel Museum in Jerusalem. “Hadrian: An Emperor Cast in Bronze,” is dedicated to the Emperor Hadrian, who ruled the Roman Empire at the beginning of the 2nd century CE. For the first time in history, the three existing bronze statues of Hadrian (one from the Louvre, one from the British Museum and one from the Israel Museum itself) are being displayed together, in an exhibition that will run until June 2016.The full significance of an exhibit in Jerusalem dedicated to Hadrian can only be understood when one considers Hadrian’s relationship with the Jews and the Land of Israel. Hadrian came to power in 117 CE, a few decades after the Romans had destroyed the Jewish Temple in Jerusalem.He decided to convert the destroyed Jerusalem into Aelia Capitolina, a city dedicated to Jupiter, a decision that greatly angered the Jews. Lead by Bar Kochba, the Jews revolted against the Romans between the years of 132 and 135 CE – and Hadrian put down the revolt with a brutality that has made him infamous in Jewish history.According to the Roman historian Cassius, 580,000 Jews were killed by the Romans (at one point, almost a third of the entire Roman army was stationed in Judea) and hundreds of Jewish towns were destroyed. The physical destruction was also coupled with severe restrictions upon the religious life of the Jews – circumcision, Sabbath observance and the teaching of Torah were banned. Many of the leading rabbis of the age, rabbis who form the backbone of the Mishna (one of the central Jewish legal texts) were killed for their religious activities. At the end of a decade or so of this persecution, Jewish life in the land of Israel was utterly decimated; to compound the destruction, Hadrian banned Jews from entering Jerusalem, and even changed the name of Judea to Syria Palestina, in a bid to quash the connection of the Jews to their land. Without exaggeration, one can say that a physical and religious persecution of the scale of Hadrian’s possibly was not matched until Hitler.And now, more than 1,800 years after leading one of the greatest assaults on the Jewish people and land in Jewish history – Hadrian has returned to Jerusalem.It is hard to describe how different the situation is in the land of Israel today, compared to the way Hadrian left it. Hadrian tried to quash the Jews’ connection to their land and banned them from Jerusalem – but the Jews have now returned to the land that they did not forget over the millennia, and it is ruled from Jerusalem, Israel’s capital city. Jewish practice and study were banned by Hadrian, upon pain of death – and today, Israel is the undoubted center of Jewish cultural and religious life. In Hadrian’s time tens of thousands of Roman soldiers dotted the land with their army bases – but today, it is the bases of the Israel Defense Forces which cover the land.This Hadrian exhibition should be viewed as part of an often overlooked strand of the Zionist narrative. For the founders of Israel, the fact that the exile of the Jews had been inflicted upon them by the Roman Empire was highly significant, and they saw the return of the Jews to Israel as a kind of posthumous victory over the Roman vanquishers. This idea made its way into much of the imagery of the State of Israel. The national emblem of the State of Israel is the Jewish Menorah (candelabrum), but specifically, the candelabrum as depicted on Titus’ Arch in Rome.The famous sculpture on that Arch depicts the Menorah of the Temple being taken away by the Roman army. In some way, the founders of the State of Israel saw the new state as a taking back of that Menorah from their historic vanquishers – the Menorah of conquest became the Menorah of independence. Israeli coins also reflect this imagery; on the back of the 10 shekel coin is the phrase “To the freedom of Zion,” with an olive tree, mimicking such a coin used by the rebels as a sign of rebellion against the Roman conquest.The displaying of an exhibit dedicated to Hadrian in the center of Jewish Jerusalem fits this narrative perfectly – Hadrian is being displayed in a city that defies all his plans.But the Hadrian exhibit has one further, highly significant message. It is not just that the political situation of the Jews is vastly improved today compared to the time of Hadrian, but the national psychology of the Jewish nation has changed dramatically as well. Let us listen to the words of a leading rabbi at the time of Hadrian, who had witnessed the carnage brought upon his people.“Rabbi Elisha, son of Abuya said: ‘Now that we live under the evil rule of Hadrian, and he has decreed against us evil and harsh decrees.... Really we should stop marrying women and having children, and we should just allow the descendants of Abraham to die out!” (Bava Batra 60b) Rabbi Elisha had seen his land and cities destroyed, his people decimated, and his rabbinic colleagues publicly humiliated and killed. He saw no hope for the Jewish future, to the point where there was no reason to bring Jewish children in to the world.In the land of Israel today, there is a different tone to Jewish life, a more positive view of the Jewish future, a feeling captured in the national anthem of Israel – “Hatikvah” (“The Hope”). Etched onto the heart of the 21st century Jew are the words of the anthem`s rousing chorus: “Od lo avda tikvatenu, hatikvah bat shnot alpayim, lihyot am chofshi be’artzeinu, eretz tzion veyerushalayim,” “Our hope is not lost, the hope of 2,000 years, to be a free nation in our land, the Land of Zion and Jerusalem.”Am Yisrael Chai – the people of Israel lives.