It’s a funny definition of democracy, but one that Erdogan and his champions call their own. 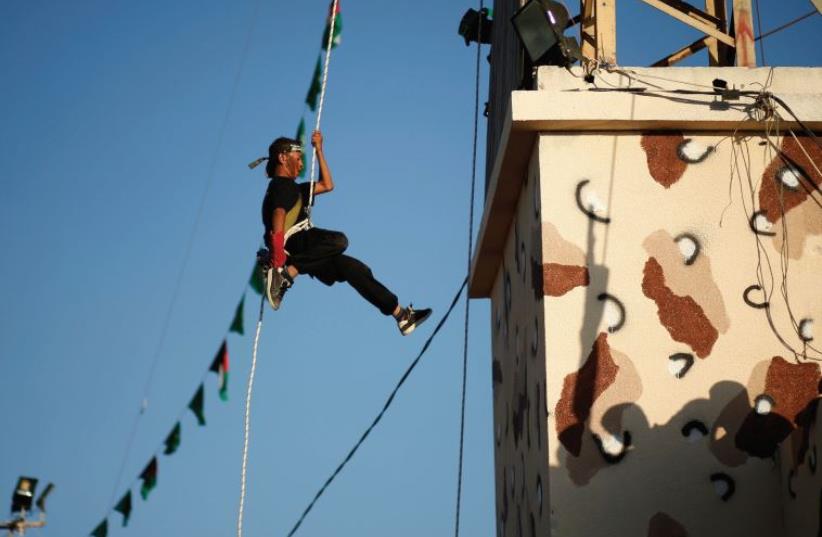 SUMMER FUN in Gaza. A Palestinian rappels down from a building during a Hamas-run summer camp that blends hate and terror education
(photo credit: REUTERS)
Advertisement
Hamas was among many entities rushing to congratulate Turkish President Recep Tayyip Erdogan on his success at quashing the attempted coup against his government last weekend. Like leaders of countries across the world, the heads of the terrorist organization at the helm in the Gaza Strip hailed Erdogan’s success as a “victory for democracy.”Unlike those who waited to see the outcome of the failed military takeover before applauding the autocrat in Ankara, however, Hamas was genuinely relieved. After all, the Islamist Palestinian group has no greater friend than Erdogan.Hamas has thus been able to proceed with its summer activities in a particularly festive manner. Two of these are worthy of note.The first is a special exhibit marking the second anniversary of Operation Protective Edge, Israel’s 2014 incursion into Gaza to destroy the terrorist infrastructure – tunnels and missile-launchers – used by Hamas to kidnap and kill innocent Israelis.Though Israel managed to decimate much of the above, leaving swaths of Gaza in ruins, Hamas did not feel defeated; nor should it have. No military match for the mighty Israeli army, it nevertheless succeeded in sending the Israeli populace into bomb shelters several times a day, while retaining political power, several tunnels and subsequently buckets of money and materials with which to keep its terror mill running.To boost morale and demonstrate that it is doing its job properly, the Izzadin Kassam Brigades – amusingly known as Hamas’ “military wing” – has created a death-and-destruction Disneyland for family fun, free of charge. This consists of a display of various authentic weapons literally deployed in the slaughter of Israelis, and an extra-special tour of a tunnel bordering the Jewish state.To promote the exhibit, Hamas produced a video showing children touring the well-lit underground passageway, whose purpose is to transport terrorists around Gaza and to ambush IDF soldiers through shafts emerging on the Israeli side.Some 50,000 kids in the Strip will be too busy to frequent the exhibit, however, as they will be attending jihad camp, the second happy Hamas event taking place before the start of the next school year. At one of the 25 “Vanguards of Liberation” camps, Gaza youth will learn hand-to-hand combat, weaponry and – for a special treat – how to desecrate the Israeli flag.In a promotional video provided and translated by the Middle East Media Research Institute, a masked counselor explained, “We are in need of strong and powerful heroes in order to implement the words of Allah: ‘(The companions) are tough against the infidels and merciful among themselves.’ We... motivate the students, to wage jihad, for the sake of Allah, and we instill love for Allah and His Prophet in the souls of our sons.”An administrator in the video said that the camp – decorated with posters of suicide bombers – focuses on building “an able and unique generation of powerful servants of Allah, in an ideological, religious and military sense, a generation that will liberate Jerusalem and the rest of the land, Allah willing.”One camper described his goal as follows: “We came here today to undergo training with all our strength and our knowledge, in order to protect our holy places and our land, and in order to take revenge upon the tyrannical Zionist occupation.”Meanwhile, as Erdogan purges the army, the courts, the media and the universities of anyone and everyone he suspects is not on his side – arresting thousands of people and suspending civil liberties as part of a “threemonth state of emergency” – Erdogan can and does identify with Hamas’ objectives and methods, especially those pertaining to Turkey.When Hamas Palestinian Legislative Council member Mushir al-Masri made a speech after the coup was nipped in the bud and announced, “We are ready to sacrifice our blood for the Turkish people, and... for Istanbul,” Erdogan was reassured. It is American values to which he has an aversion, not those of his co-warriors against “infidels.”It’s a funny definition of democracy, but one that Erdogan and his champions call their own.The writer is the managing editor of The Algemeiner