How can we broker a deal when we don’t understand one of the parties?

While many Israelis may not love the Palestinians, a vast majority want peace with them and wish them a good life; the same cannot be said coming in the other direction. 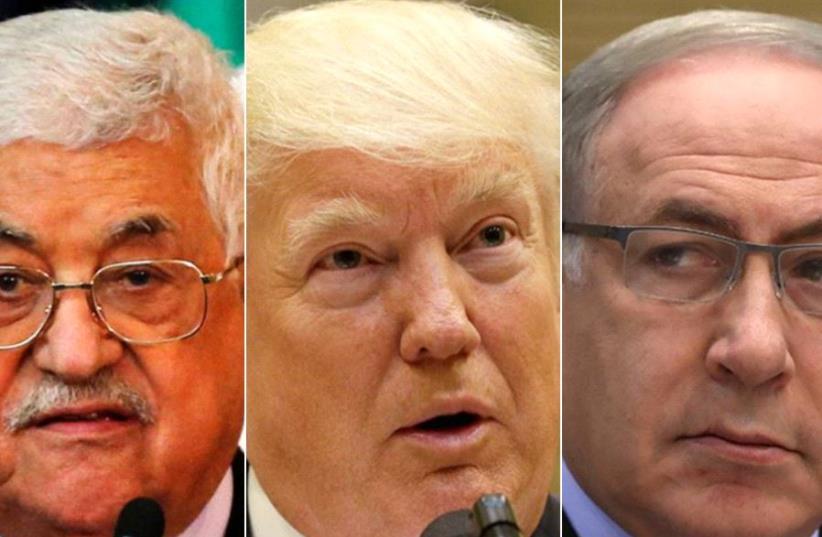 Abbas, Trump, Netanyahu
(photo credit: REUTERS)
Advertisement
Active attempts by US administrations to broker a peace deal between Israel and the Palestinians have been going on since the days of Richard Nixon. With over 40 years of failure, one might reason that there would be some soul-searching in Washington before trying again to make what President Donald Trump has described as the “ultimate deal.” Unfortunately, such introspection is rare and as such true progress remains elusive. One of the most fundamental reasons we don’t get much out of massive peace-making efforts is that we do not understand the Palestinian side of the equation.This past Friday, Israeli Arabs from Umm el-Fahm murdered two Israeli policemen guarding the Temple Mount. Palestinian Authority President Mahmoud Abbas called Prime Minister Benjamin Netanyahu to condemn the attack. Now on the face of it, this is a very good step: in the recent past, such as after the stabbing death of a border policewoman last month also in the Old City of Jerusalem, Abbas remained reticent. So on the surface, this looks like progress: the Palestinian president has started to condemn terrorism against Israelis.But one has to scratch a little beneath the surface to see otherwise.The murdered policemen this past Friday were Druse residents of northern Israel. For Abbas, the murder of Druse is not only of no benefit but it further undermines a constituency he wants on his side. Condemning the murder of Druse policemen does not inflame his base and helps Abbas with an important minority group in the region. Had those guarding the Temple Mount been Jews, Abbas would almost certainly never have called.Hamas had praised the attack (before the identities of the murdered had been released to the press) and Abbas cannot risk condemning the same activity which his government supports via stipends to terrorists in Israeli jails and families of suicide bombers who had killed Israelis. In Washington, no doubt the leadership would see Abbas’ call as a step forward; in reality, it was the very specific conditions of the attack that let Abbas look diplomatic but at no personal political cost.Maybe the analysis above seems somewhat over-the-top. But I’ll offer some concrete support: my wife, son and I testified in a federal anti-terrorism trial in February, 2015. We were part of a group of 11 families that had sued the PA and PLO for their role in attacks in which American citizens had been killed and wounded. A very curious thing happened in the courthouse at 500 Pearl Street. All of the families had representatives testify on the specific attacks in which they were involved. In two cases, and in two cases only, a woman representing the PLO and sitting in the courtroom came up and hugged one of the witnesses immediately after his testimony and said how sorry she was for his loss. In both cases, the witnesses were non-Jewish fathers who had lost a child in the Hebrew University bombing.This same woman did not hug any Jews, she did not offer them her condolences.Picture a plane sliding off the runway somewhere in the South and when people slide down the emergency escape slide, a woman at the bottom asks the white passengers if they were okay while completely ignoring black and Hispanic travelers. Such behavior would lead to outrage and the woman’s dismissal.The utter hatred of Jews that is prominent throughout the Palestinian territories and leadership makes any peace-making efforts a pipe dream. President Bill Clinton thought that one could make a deal – the Israelis give a little, Yasser Arafat gives a little, and a peace deal is born. President Clinton could not fathom the hatred the Palestinians feel for the Jews and the lengths they will go to destroy Israel and its Jewish inhabitants. No Nazi was ever ordered or encouraged to commit suicide to kill a Jew; compare this state of affairs with the near deification of dozens of Palestinian suicide bombers, many of whom have streets, squares, soccer stadia and scholarships named after them.President Trump has invested a great deal of personal time and prestige in pushing peace talks forward between Israel and the Palestinians. While many Israelis may not love the Palestinians, a vast majority want peace with them and wish them a good life; the same cannot be said coming in the other direction. The Palestinian hatred of the Jews has been nurtured for over 100 years, and its domination of Palestinian politics makes any peace deal that does not include total Israeli capitulation on territory and “refugees” a non-starter in Ramallah. The Americans must learn to understand this point. Yes, Abbas called Netanyahu – but when the victims were Jews, no phone call was placed in Ramallah. And that says it all.The author is chief scientist at Lishtot Detection, Ltd. (www.lishtot.com) and lives in Jerusalem.