It also contradicts the Basic Law: Human Dignity and Liberty, because it discriminates against Palestinians, whose land can be expropriated to make way for Jewish building. 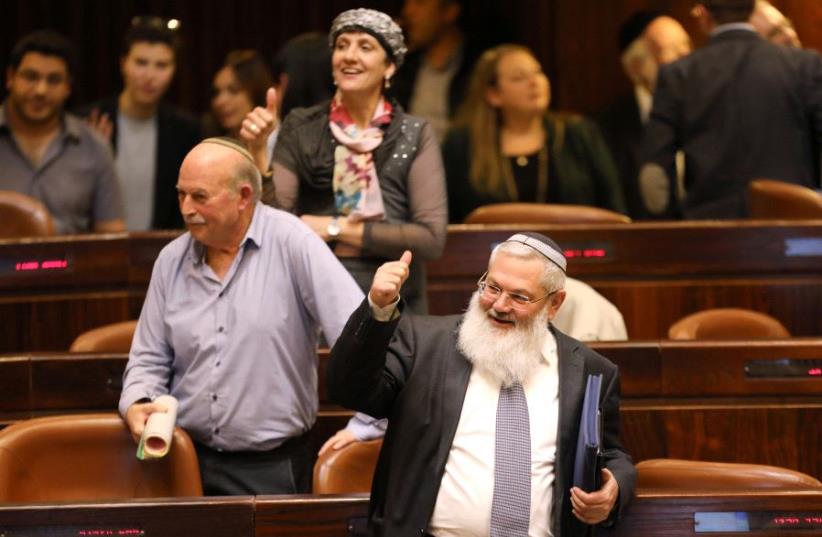 Deputy Defense Minister, Eli Ben-Dahan (front) and other Israeli lawmakers give a thumbs up gesture as they attend a vote on the settlement bill at the Knesset on Feb. 7, 2017
(photo credit: REUTERS)
Advertisement
There are a number of problems with the settlement regulation law passed by the Knesset on Monday night.First off, it was legislated in isolation from any overarching policy vision regarding the future of Israeli-Palestinian relations in the West Bank. Next, it goes against five decades of settlement-planning guidelines that differentiated between state land and privately owned land.It also contradicts the Basic Law: Human Dignity and Liberty, because it discriminates against Palestinians, whose land can be expropriated to make way for Jewish building, while not providing the same recourse for Palestinians against Jews. And it will trigger vigorous international opposition as it is seen as de facto, unilateral annexation.But the regulation bill also jeopardizes the chances of implementing a negotiated two-state solution to the Israeli-Palestinian conflict without providing an alternative solution.At least since the Oslo Accords, consecutive Israeli governments have supported a negotiated two-state solution as the only way of keeping the State of Israel both democratic and Jewish.Full annexation of the West Bank has until now been ruled out as a viable political position, because a majority of Israelis has opposed giving up on Israel’s democracy or its Jewishness. Annexation would either mean that the Palestinians living in the West Bank would be given full rights – including the right to vote in the Knesset -– or would be denied these rights.The first option would undermine the clear Jewish majority that Israel enjoys, which enables it to shape the State of Israel in accordance with Jewish national symbols, national holidays and legislation such as the Law of Return.The second option would undermine Israeli democracy by denying hundreds of thousands of Palestinians the right to political representation.The passage of the regulation bill undermines chances for a negotiated settlement to the conflict. It is a unilateral move to consolidate Israel’s presence on the West Bank – not just in areas where there are no Palestinian property claims, but also on land that is purportedly privately owned.Palestinians will see the move as a green light to launch their own unilateral measures. And though they have been doing this for some time now, these unilateral moves – such as appealing to the UN and other international bodies – will be given more legitimacy.Israel will no longer be able to call on Palestinians to halt appeals to international bodies to intervene in the conflict. If unilateral measures are a legitimate policy for Israel, then they must be for Palestinians as well.Instead of direct negotiations and cooperation, each side in the conflict will ignore the other side and take actions seen as advancing its own interests, pushing chances for peace further out of sight.The new law bill will make it increasingly hard for Israel to garner international support for a negotiated solution.If international opinion were strongly slanted against Israel before passage of the bill, matters will only get worse with its passage.World sentiments will be with the Palestinians, making it even more difficult for Israel to present its case. Prime Minister Benjamin Netanyahu will sound disingenuous when he declares, as he often does, that he is ready to meet with the Palestinian “anytime, anywhere.” What would be the point of such a meeting if Israel has already decided to pave the way for annexation? We must reiterate, therefore, our call that the prime minister provide the people of Israel with his vision for the future of Israeli-Palestinian relations in the West Bank.If he has given up on the two-state solution, he should say so. If not, he should explain how he expects to still achieve a negotiated peace deal with the Palestinians despite taking unilateral measures like the regulation law.The majority of Israelis still wants to see Israel remain both Jewish and democratic. We would like to believe that the government and the prime minister agree. They need to explain how.