In plain language: From Assyria to Syria

Can the Muslims meet the challenge? Will they respect the pluralism of Europe and America, which in principle favors no one religion or culture over another? 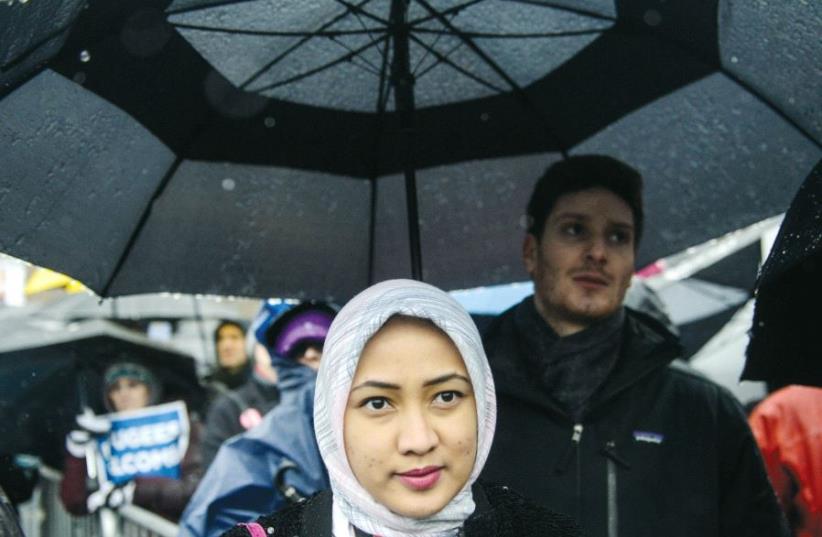 Muslims in Europe
(photo credit: REUTERS)
Advertisement
Love, as the famous song goes, changes everything. But war is equally transformative; it shuffles all the cards and delivers a brand new deck.Most of the major shifts in the development of human history were caused by conflict, setting in motion radically new entities and enterprises.Our own modern history is a perfect example: War in 1939 decimated our people, essentially ending our thousand- year sojourn in Europe; war finally brought us independence in 1948; war in 1967 doubled our borders and returned our ancient heartland to us, exacerbating the conflict with our neighbors.The world is now gripped with a new cause célèbre – the immigration crisis.War in Syria and several other Middle Eastern countries has created havoc, causing millions of people – the majority of them Muslim – to leave their homes and seek shelter elsewhere. And since these refugees are cruelly denied entrance by their fellow Muslims in the region, they look to the West for safe harbor and the chance to start a new life.The plight of these people is tragic and quite understandable; the awful atrocities of Syria’s Bashar Assad and Islamic State’s terrorist regime would move any normal person to run, and run far.Only someone who enjoys abusing four wives, or takes pride in watching a thief get his hand cut off by Shari’a law, wants to be part of these backward, barbaric regimes. And since the civilized world has woefully failed to get its act together in battling these forces of evil – not unexpected when “allies” like Russia and Turkey are major players in the mix – the average citizen has little recourse but to flee for his life.In the West, massive demonstrations have been held in support of unrestricted immigration. While, clearly, some of these protests are aimed at the US administration – energized by President Donald Trump’s efforts to put a brake on the unrestricted flow of incoming humanity – more and more mainstream organizations, including Jewish groups such as the Hebrew Immigrant Aid Society and the ADL – are joining the fight.But what will be the end result of this struggle? Even as we sit in the eye of the storm, we would be well advised to consider the long-term ramifications of this cataclysmic migration of millions. Perhaps a look back at a strikingly similar event in history will give us some perspective.Sennacherib of Assyria was one of the great rulers of ancient times, reigning from 744 to 705 BCE. A prolific builder – the royal palace at Nineveh and the Hanging Gardens were among his many grandiose projects – he also had a fearful war machine that defeated the mighty army of Babylonia and vanquished the northern kingdom of Israel.In order to maintain rule in his massive empire, Sennacherib employed a brilliant and unique strategy. He took large segments of the populations he conquered and moved them, en masse, to other parts of his far-flung domain.By removing people from their native lands and intermingling them with other foreigners, he limited their ability to organize a revolt against him, while at the same time assimilating them into the greater Assyrian nation.A by-product of this policy was the confounding of ancient identities. Thus the Egyptians of today are not necessarily those who built the pyramids (just look at the stark difference in appearance between presidents Sadat and Mubarak); other ethnicities were lost, often forever. And the impact on Jewish life was no less dramatic. Says Rabbi Yehoshua in the Mishna: “This is why the tribe of Amalek ceased to exist as a people, and this is why the Ten Tribes of Israel were hopelessly lost.”Perhaps the greatest tragedy in our history – dwarfing even the Holocaust – was when Israel’s northern kingdom was relocated by Assyria. Ten of the Twelve Tribes – five-sixths of our population – essentially disappeared. Because these tribes had lost not only their homeland but also much of their connection to observant Judaism – they were prevented from coming to Jerusalem to bring offerings, forgoing key commandments and the Jewish festivals – they had no identity to cling to, and so they melted into whatever culture they found themselves.Where did these “lost” Jews end up? Africa, Japan, China, India, Afghanistan, Kurdistan, Ethiopia, the Caucasus, Yemen, Persia, even the Americas are among the theories. But while there has been a significant effort to identify pockets of these isolated Jewish communities and bring them home to Israel – fellow Jerusalem Post columnist Michael Freund has been a major pioneer in this campaign – the fact is that the vast majority will remain unknown.And herein lies the essential question: What will be the result of the influx of millions of people – with their own distinct culture and credo – into a new environment? Will they maintain their identity or integrate into the faceless majority? The challenge of the Jew in the Diaspora for two millennia has been to maintain adherence to Jewish tradition, all the while expressing loyalty to the ruling authority; to hold on to our Jewishness – whatever that means – while not acting disrespectfully to our hosts.This has required a formidable ability to tread a very thin line, and we have not always succeeded at it. Assimilation and intermarriage have ravaged our numbers – which have remained stagnant, if not declined – and only the blessing of Israel has saved us worldwide.Can the Muslims meet the challenge? Will they respect the pluralism of Europe and America, which in principle favors no one religion or culture over another? Will they bow to secular norms? Will Jews be able to walk freely – with kippot on their heads – or women in miniskirts, through largely Muslim locales, such as Seine-Saint-Denis in Paris or Malmö in Sweden? If the new arrivals look to create a state within a state wherever they go, then while one war may be ending for millions of people, another one may be just beginning.

■ The writer is director of the Jewish Outreach Center of Ra’anana; jocmtv@netvision.net.il
Advertisement
Subscribe for our daily newsletter