Opposition to women serving in the army, particularly in combat roles, is long-standing, and not only in haredi circles. 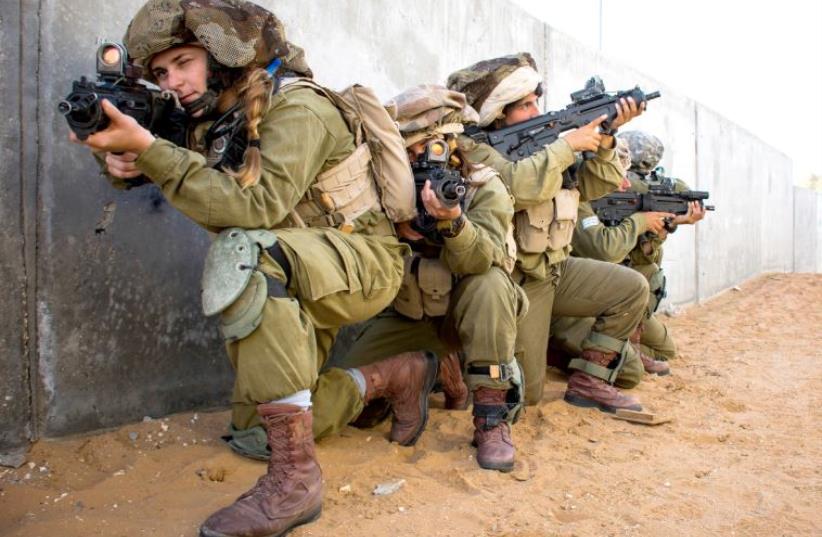 Female combat soldiers in the mixed-gender Caracal Battalion train in urban warfare.
(photo credit: IDF SPOKESMAN’S UNIT)
Advertisement
The recent rant of Rabbi Yigal Levenstein, who railed viciously against women serving in the IDF, has created a firestorm of comment and critique throughout Israeli society, up to and including the highest levels of the military and the government.Prime Minister Benjamin Netanyahu correctly noted that throughout our history, women have battled courageously on behalf of the Jewish People, from the prophetess Deborah, to Jael (who killed the Canaanite general Sisera) to Hanna Szenes, to members of the Hagana, Palmah and Irgun, to today’s lady soldiers.Defense Minister Avigdor Liberman questioned whether Levenstein should be disqualified from educating pre-army young men, the primary target of his tirade.When called on the carpet for mocking and maligning a large segment of the population, Levenstein stubbornly refused to retract his ugly remarks. In an interview with a Channel 2 female reporter, he apologized only “for the style, not the substance” of his statements.Opposition to women serving in the army, particularly in combat roles, is long-standing, and not only in haredi circles. Many national-religious figures also take a negative viewpoint, and the Chief Rabbinate steadfastly maintains its aversion to girls entering the IDF (it should be noted that, sadly, the rabbinate has become consistently less Zionistic and less moderate since the tenure of Rabbi Shlomo Goren, who came straight from the IDF to his post as chief rabbi). Women engaged in what is perceived as “men’s work” can indeed lead to difficult situations and is clearly not for everyone, but a blanket dismissal is also the wrong call.Life is all about choices, about having the wisdom to make the right choice, and then having the will, the determination and the persistence to make that choice succeed. Once the world was a simpler place. Families stayed in the same locale for generations; higher education was not universal; religious texts were open to some, yet taboo for others; and occupations were strictly defined – men went out to work in the world at large, women stayed in the home. Choices then were more limited and the menu of opportunities noticeably smaller.It is a different world today. All of us live on the information highway, and that is a road that can take to us to an infinite number of places and possibilities.Avenues that once were barred now beckon to us. The challenge for the contemporary traditional Jew is to be able to maintain our commitment to God and Torah – which defines the essence of who we are and brings true meaning to our life – while interfacing with the big, brave, beautiful world that spreads out before us, to stay consistent with our values, even as we are “connected” to an ever-expanding set of options. That is an ambitious adventure, to say the least.This challenge is not restricted to the modern Orthodox. The haredi world, too, must confront new realities and scenarios. Can haredi women – forced into the employment field due to financial pressures – maintain a high standard of tzniut (modesty) while working in an office environment where the majority of their co-workers are male? Can both men and women who possess a special gift for the arts, for business and yes, even for the military, pursue their dreams and inclinations without being shunned in their host communities? Can they break away from the monolithic adherence to religious learning only and still be regarded as productive, practicing Jews? Though I have never met Yigal Levenstein, his remarks were a personal insult to me and to our family. Having lost a son in the IDF, we have a deep and special connection to the army, which we see as one of the great institutions of our state and a source of pride for all Jews.While our two eldest daughters chose to serve in Sherut Leumi (national service), our youngest daughter decided to enlist in the army. This was not an easy decision for her; she was one of the few girls in her high school grade to move on to the IDF. Her national-religious principal, who opposed women in the military, callously refused to acknowledge her choice at graduation, leaving her name off the list of places where the graduates would be going.However, it was a choice she wanted to make and she stuck to her guns – pun intended. She excelled in her service as a social worker in the tank corps, helping soldiers deal with family and financial problems and easing the integration of lone soldiers into the IDF and Israeli society. All the while, she held fast to her religious beliefs, becoming a model for non-observant young women who saw, perhaps for the first time, just how beautiful a Jewish lifestyle can be. She brought many of them back home to experience Shabbat and holidays, and she recalls with pride explaining Jewish traditions to them, even teaching them to recite the Shema before (finally) going to sleep for the night. Her service was a kiddush hashem, a sanctification of God.Levenstein’s list of complaints, in my book, is completely out of touch with reality. He said that the IDF “makes our daughters crazy.” Not so. It actually makes our daughters more mature, more responsible, more self-assured. He said, “I don’t know who would marry such girls,” yet the army, in our case, proved to be a marvelous shadchan (matchmaker).Our daughter married one of the finest commanders on her base! Levenstein’s final, most caustic comment is also the most ill-informed. He said, “These girls enter the army as Jews, but they do not come out of the army as Jews.” The truth is, with God’s help, they come out as even better Jews.

■ The writer is director of the Jewish Outreach Center of Ra’anana and father of Sgt. Ari Weiss, who fell in battle against Hamas terrorists in Shechem in 2002.