To build or not to build 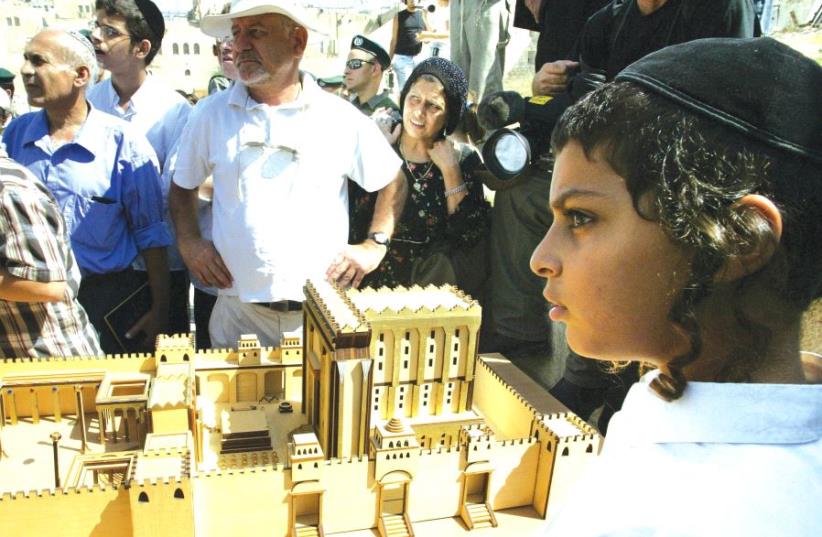 A young boy stands by a model of the Second Temple during a demonstration by Jewish ultra-right-wing protesters at the Western Wall on Tisha Be’av, 2003
(photo credit: REUTERS)
Advertisement
May it be your will, Oh God, that the Temple be speedily rebuilt in our day, and there we shall reverently worship You, as we did in days of old. (Closing prayer of the Amida silent devotion)Three times a day we ask the Almighty to give us the strength to rebuild the Beit Hamikdash. The prophets predict it, we sing about it at our Shabbat table; speakers customarily end their Torah lectures with a plea for it.But do we really – seriously – envision the ancient Temple being built in Jerusalem any time in the near – or perhaps, even distant – future? As we swing into summertime, our calendar will be devoid of holidays – except those dealing with the Beit Hamikdash. The Fast of 17 Tamuz – when the walls of Jerusalem were first breached by the Babylonians in 586 or 425 BCE (the opinions differ) – will usher in the Three Weeks, a period of semi-mourning when weddings are suspended and festivities curtailed.This will morph into the Nine Days, when mourning intensifies and (in Ashkenazi tradition) no meat or wine may be consumed on weekdays. Finally comes the blackest day in the Hebrew calendar, Tisha Be’av – in numeric terms, the Jewish 9/11 – the traditional date on which both Temples were burned and Jerusalem destroyed.Through all of this, we will be lamenting – literally, as we read the Book of Lamentations, written by first-person survivor Jeremiah – the loss of the Temple, and expressing our fervent wish that it somehow be restored to us. But is that realistic? On a political level, we know that even the slightest mention of reconstructing the Temple sends the Muslim world into a frenzy, as they threaten to riot across the planet the moment we would break ground. On a practical level, what will be done with the seventh-century Dome of the Rock (the place from where Muhammad is said by Muslims to have ascended into heaven) and the nearby Aksa Mosque, both located on the Temple Mount, smack in the place where the Beit Hamikdash stood? Will they be torn down or re-located? Will they mystically, magically disappear into thin air? There is no shortage of religious barriers to cross as well. Since all Jews are technically tamei (in a state of spiritual impurity), we cannot administer any of the functions that the Temple requires. There is no para aduma (red heifer) to spiritually cleanse us, as we had in Temple days. Even now, Israel’s rabbinic establishment – not to mention the entire haredi community – urges Jews to not even approach the Temple Mount, lest we walk on hallowed ground that is halachicly “Jew non grata” under the present circumstances. How would they react to an ad hoc Temple resurrection? And then there is the issue of the korbanot, the offerings that constituted the primary, day-to-day activity in the Beit Hamikdash. Will they be reinstituted? Will we see thousands of animals – goats, bulls, sheep, lambs, pigeons – brought to the main courtyard and slaughtered, their blood sprinkled on the altar? While the very thought of this clearly repels many people, virtually all the rabbinic sources – from Ezekiel to Maimonides to Rav Soloveichik – affirm that animal offerings will be a main feature of the Third Temple (even Rav Kook is on record as saying, “All things will be as they once were in the future Temple”). Are we ready for this? Of course, in the face of all these obstacles, Jews of faith may simply say, “When the Messiah comes, all the problems will be solved and it will all somehow fall into place.” But Judaism, I believe, is much more pragmatic and proactive than it is Pollyanna, pie-in-the-sky wishful thinking.I therefore suggest that we approach this issue in a different way. By examining why the Temples were destroyed in the first place, we can lay the groundwork for its rebuilding. The Talmud is replete with reasons and rationalizations for the destruction; we ought to consider a few of them and ask just how much progress we have made: • We neglected the proper education of our children; are our schools doing their job well today; are our teachers honored and well-paid? • We did not offer sufficient respect to the elderly among us; how do we relate to senior citizens, particularly Shoah survivors? Have we taken care that they are not suffering below the poverty line? • The previous commonwealths engaged in “excessive righteousness.” Have we indeed cured ourselves of self-righteousness, or do we continue to look askance and down at those who do not meet our own “religious standards”?• We practiced sinat hinam (baseless hatred). Is there sufficient love today among all the camps of our communities, Ashkenazi-Mizrahi, secular and religious, right- and left-wing? • We did not go “beyond the letter of the law.” Have you driven on our roads lately? Do other drivers yield the right of way at roundabouts, or do they race to see who gets there first? Do they let others merge into traffic, stay in their correct lane and not “sneak ahead” of the law-abiders? Do the ever-present electric bikers show courtesy to pedestrians? We are a fantastic nation – the richest, most creative and most courageous in Jewish history – but we are far from perfect. It seems to me that if we want to build a Beit Hamikdash, we had better start by building an even better society. The writer is director of the Jewish Outreach Center of Ra'anana. [email protected]