In plain language: The Jewish flag of optimism 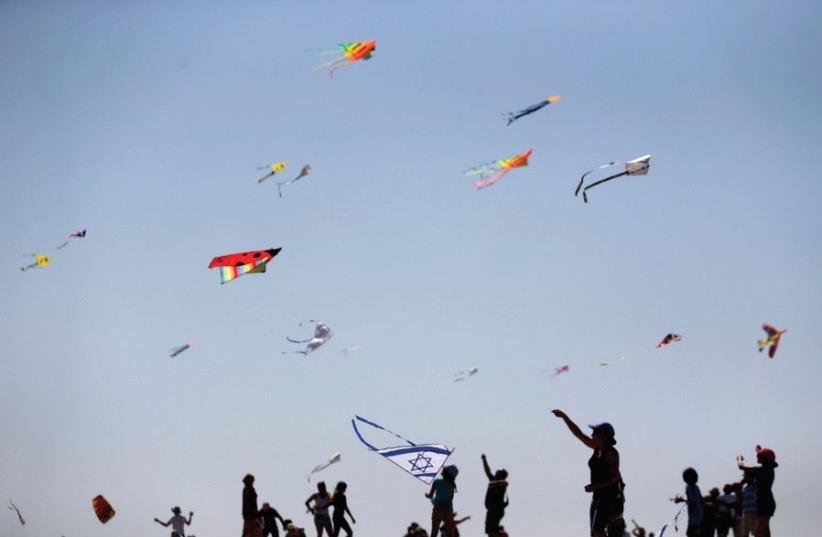 Israelis fly kites on Rosh Hashana
(photo credit: REUTERS)
Advertisement
Every Jewish holiday has a specific color associated with it: Rosh Hashana, for example, connects to gold, for on this day we crown God as King, who wears a golden crown; Yom Kippur connects to white, the color of purity.Each holiday is also linked to one of the senses: Passover revolves around the sense of speech, as we tell the story of the Exodus and sing the songs of the Haggada, while Sukkot involves the sense of touch, as we hold in our hands the lulav and etrog, and build our own little sukka outside our homes.Each holiday also serves to evoke a distinctive mood: Purim is one of ecstatic joy, approaching abandon, as we cheer our victory over arch-enemy Haman; Tisha Be’av is dark and heavy as we mourn the loss of the Temple. But what is the proper mood for Rosh Hashana? Let's be Jewish and answer with a question! The configuration of the 10 Days of Repentance seems a bit out of whack. We begin on Rosh Hashana with two days of festive celebration; though we spend a bit more time in the synagogue than usual, on the whole we are quite upbeat. We then concentrate for several days on reciting the penitential slihot prayers, constantly beating our breasts in contrition, and then finally, we end with the Day of Atonement, denying ourselves all physical pleasures as we plead for Divine forgiveness.Now, wouldn't the reverse order have made much more sense? Should we not have begun the process by engaging in serious soul-searching; asking God on Yom Kippur for a new lease on life, and only at the very end – when our prayers have been answered in the affirmative – toast our good fortune and start fresh with a new year?We can respond to this question with a little story. There once was a family that strictly forbade eating between meals; snacks were a definite no-no. But their young daughter was determined to have a chocolate bar midway between lunch and dinner. As she began to unwrap the bar in front of mom and dad, they vigorously shook their heads, warning her not to partake of the treat.But the clever little girl looked them right in the eye and promptly recited the blessing on the chocolate! The parents now had no recourse but to let the child take at least one bite, rather than have her utter a blessing in vain.In essence, that is what is happening on Rosh Hashana. We jump the gun and presuppose the Divine decision that only comes later. We indicate to God that we are so sure, so confident that we will ultimately get His nod of approval that we begin our celebrating right at the very beginning. With typical Jewish chutzpah, we force the Almighty’s hand by virtue of our uncompromising sense of optimism.Optimism, I suggest, is the operative mood of the day. No doubt, if we so chose, we could take a very different posture, because we have plenty of reasons to be fearful, negative, even depressed about events surrounding us. This past year has seen a dramatic upswing in antisemitism around the globe, continued acts of Islamic terrorism at home and abroad, and no sign of a cease-fire between the warring factions of Judaism.Most disconcerting are the growing number of renegade Jews on campus and elsewhere who have chosen – against all rational thinking and with increased venom – to take sides with those who would demonize, and ultimately destroy the State of Israel. Throw in a few North Korean missiles and natural disasters like Harvey and Irma, and you couldn’t blame a guy for wallowing in despair.But that’s not our way. True, we have no shortage of problems and challenges – that’s what makes life so interesting! – but we are determined to tackle those problems and to continue to grow, to build, to prosper and to persevere.That’s the stuff we’re made of; we may at times give in, but we never give up. We fall, but we pick ourselves up and get back in the saddle again, with increased determination.Isn’t that the underlying message behind the stories we read on Rosh Hashana? Yes, Sarah is overcome with sadness at the apparent decision of God to leave her childless. She is distraught, but never defeated; she carries on with her prayers, never letting go, until she is finally rewarded with a son.Hannah, too, must deal with depression as she struggles to get pregnant, even being mocked by the religious establishment as a drunk, or mentally challenged, until her devotion is rewarded. And Abraham? He faces the severest test of all – losing a child by his own hand – and still he carries on, ultimately becoming the eternal symbol of faith under fire.This same “we shall overcome” motif echoes in the sounds of the shofar. There is the shvarim, with its poignant, waillike cry, and the tru’a, with its sudden, staccato sobbing. But though these melancholy notes have their place, they are always followed by the triumphant blast of the tekia, the call of victory and survival, and the tekia gedola, the “final word” of redemption.The year ahead, no doubt, will continue to test our resolve and strain our sense of solidarity. We’ll worry a lot, and maybe even waver at times. But we’ll never wave the white flag – unless it’s striped in blue with a large Magen David in the middle.It’s a flag of Israel, the Jewish people – and optimism. The writer is director of the Jewish Outreach Center of Ra’anana. [email protected]