Into the fray: Loopy, loopier... Lapid

There is little that infuriates me more that the arrogance and ignorance of Yair Lapid, head of the Yesh Atid party, and the shameful myopia and shameless mendacity he exhibits. 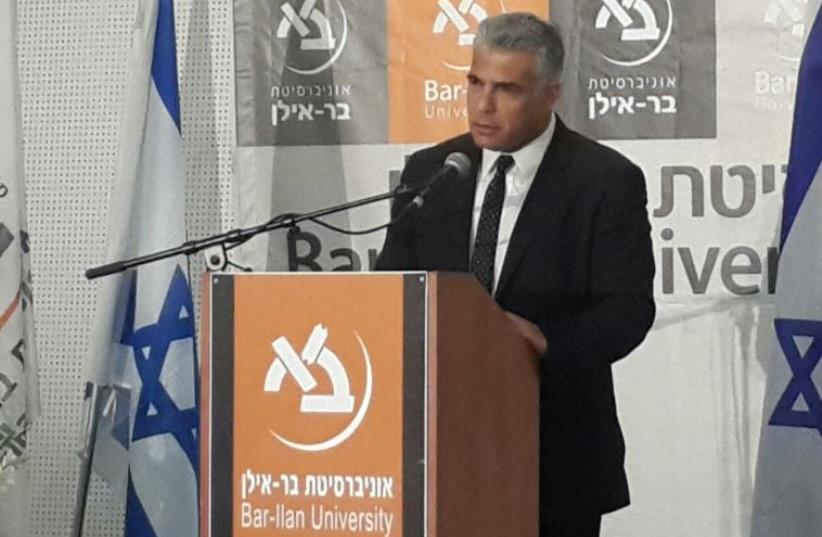 Yesh Atid chairman Yair Lapid speaks at Bar-Ilan University
(photo credit: Courtesy)
Advertisement
The greatest tragedy of the Israeli-Palestinian conflict is that everyone knows how it will end. We will divide up the region. Israel will return most of the West Bank, and the Palestinian flag will fly on public buildings in east Jerusalem...The only unanswered question is how many more people will have to die along the way. And so we will fight against the extremists on both sides, including our extremists, the settlers – Yair Lapid, Der Spiegel, May 8, 2008

Jerusalem is not a place, it is the constitutive concept of Israeli identity and our most fundamental ethos... We will not divide Jerusalem. No matter what happens. If that eventually means there will be no resolution [of the conflict] then there will be no resolution. Countries do not conduct negotiations over their own capital – Yair Lapid, Wallah, December 27, 2014

Endorsing the unacceptable? Endeavoring to appear soberly circumspect, Lapid acknowledges that the API has certain “problematic clauses,” which he “cannot accept.” Yet, he insists, “even if we do not agree with every word in it... it still can serve as an appropriate framework for negotiations.”This is difficult to comprehend, because every one of the cardinal elements of the API categorically negates the stated positions of Lapid and the declared platform of his Yesh Atid party.Thus, while the API calls for Israeli withdrawal from the Golan, the party’s platform states baldly that “Yesh Atid strongly opposes any negotiation over the Golan Heights, which are an integral part of the State of Israel.”The API calls for Israeli withdraw to the pre-1967 lines, while Yesh Atid calls for significant changes to those lines, to include “large settlement blocs (Ariel, Gush Etzion, Ma’aleh Adumin) within the area of the State of Israel,” and presumably sufficient territory to ensure secure access to/from these areas.The API calls for a division of Jerusalem and establishment of east Jerusalem as the capital of a sovereign Palestinian state, while Yesh Atid’s platform resolutely determines that “Jerusalem will remain united under Israeli sovereignty... Jerusalem is not merely a place but the center of Jewish-Israeli ethos and the holy site to which Jews lifted their eyes for generations.” No kidding.

Not a question of every word, but any wordFinally, the API calls for a “just solution to the problem of Palestinian refugees... in accordance with the UN General Assembly Resolution No. 194,” which states “the refugees wishing to return to their homes...should be permitted to do so at the earliest practicable date...” and, in effect is an acknowledgment of the Palestinians’ “right of return.” On the other hand, Yesh Atid strongly rejects any such acknowledgment and unequivocally declares “the question of the refugees will... under no circumstances be settled in Israel.”Clearly, then, when Lapid tries to gloss over the glaring inconsistencies between the positions he pledged to voters and the core elements of the API by saying “one does not have to agree to every word,” he is grossly understating the discrepancies between the two. Indeed, in reality, it appears, that it is far more likely that Lapid/ Yesh Atid would not – or at least should not – agree to any word.And if Lapid/Yesh Atid are bound by their pledge to the voters to reject every core tenant of the API – Golan, 1967 borders, Jerusalem, refugees – how could the API possibly be “an appropriate framework for negotiations”? Yet for Lapid to hold totally opposing – or, at least, totally incompatible – positions, simultaneously, on any given subject does not seem to trouble him much.Thankfully left unanswered.Lapid laments, “Israel should not have left [API] unanswered for 13 years.”He is of course totally wrong.Indeed, it is just as well that it was left unanswered, or today Israel could well have found itself with al-Qaida affiliates deployed on the Golan, ISIS forces perched on the cliffs overlooking Tiberias, and an assorted array of Islamists extremists entrenched mortar-distance from Ben-Gurion Airport and tunnel-distance from the Trans-Israel Highway (Route 6).Sadly, analysis – and robust repudiation – of Lapid’s positions on Gaza, Iran, and US-Israeli relations, all equally porous and erroneous, must await future column(s).So, allow me to end with the same lines with which I ended an earlier article I wrote on Lapid (“What an idiot,” Jerusalem Post, October 10, 2013): “The challenges confronting the country are daunting. To contend successfully with them we need leaders of substance and depth. Lapid does not fit the bill – not by a long shot.”They are just as valid today as they were then.Martin Sherman (www.martinsherman.org) is founder and executive director of the Israel Institute for Strategic Studies (www.strategicisrael.org).
Advertisement
Subscribe for our daily newsletter