Iran’s regime is attempting to use this latest charm offensive as a card to play in front of the international community and as a means to cover up other aggressive actions. 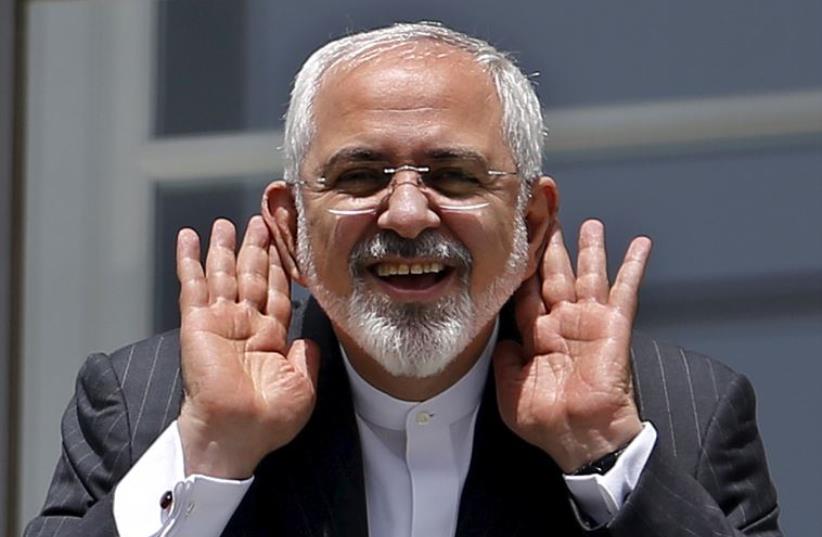 Iranian Foreign Minister Mohammad Javad Zarif gestures as he talks with journalist from a balcony of the Palais Coburg hotel where the Iran nuclear talks meetings are being held in Vienna, Austria
(photo credit: REUTERS)
Advertisement
Iran’s post-nuclear deal behavior was evident in Bahrain and Kuwait two weeks after the nuclear accord was signed.Before the ink had even dried on comments made by Iranian officials regarding the recent Gulf-Iranian dialogue, Kuwaiti authorities made the announcement that they had intercepted a Hezbollah-linked terrorist cell that had transported weapons into the country via Iran. And at the same time that Iran’s Foreign Minister Mohammad Jawad Zarif was speaking regarding his vision for relations with Tehran’s Gulf neighbors, Bahrain announced the results of investigations into an attack in Sitra which killed two policemen and wounded six: it had arrested five individuals who received financing and training from Iran’s Revolutionary Guard and Hezbollah in Iraq and have been linked to a number of terrorist incidents in Bahrain over recent years.There is nothing new in Tehran’s foreign policy. These two terrorist incidents are certainly not the first that have been directed at Gulf countries by Iran and its proxies in the region. However, both coincided with warm calls from the Iranian administration for dialogue with its Gulf neighbors, and clearly display the huge difference between concrete realities and action on the one hand and mere words on the other.For example, Iran’s Foreign Minister Zarif called during his last visit in Kuwait for dialogue and urged Gulf Arab countries to join forces with Tehran to fight against extremism and militancy in the Middle East.Simultaneously, in a televised speech last month, Iran’s supreme leader Ayatollah Ali Khamenei said Iran would continue to support its regional friends despite its recent nuclear deal with world powers, including “the oppressed Palestinian nation, Yemen, Syria, Iraq [and] Bahrain.”In between, Iranian President Hassan Rouhani said during his visit to Kurdistan province last month: “Iran protects Erbil and Baghdad the same as it protects Iranian Kurdistan.” “Without Iran’s help Erbil and Baghdad would be in the hands of terrorist groups right now. The way we protect Sanandaj we also protect Sulaimani and Duhok,” he said.Even while fighting Islamic State (IS) Iran had a hand in the establishment of the “Popular Mobilization Units” in Iraq, supplies weapons, money and training to the Shi’ite Houthi militia in Yemen and to Hezbollah in Lebanon and keeps interfering in the internal affairs of its Gulf neighbors and continuing its destabilizing activities in the region.And all this is simply part of Iran’s push to achieve one of its most prized strategic objectives: to establish a bridge between itself and the Mediterranean via Iraq, Bahrain, Kuwait, Saudi Arabia via Syria and Lebanon. Iran will fight tooth and nail to achieve this goal; there’s no harm in attempting dialogue with the Gulf states as a PR move to cover up these efforts.Iran’s regime is attempting to use this latest charm offensive as a card to play in front of the international community and as a means to cover up other aggressive actions.These actions can only be explained as evidence of Iranian political and geographical ambition along with a desire to interfere in the affairs of neighboring states in the Arabian Gulf. Tehran is trying to further extend its influence across the region and exploit the momentum it has gained from the nuclear deal with Western powers.Now that it has secured its control over Baghdad, Beirut, Gaza, Sana’a and Damascus, Iran has its eyes on other countries, and Hezbollah is evidently nothing but a means to an end.Shi’ite Iran and Sunni Gulf Arab states have historically had a hostile relationship, mainly due to ideological differences. Iran’s recent nuclear agreement with six world powers further exacerbated the tensions as the Gulf Cooperation Council (GCC) thinks that the deal would provide Tehran more resources to support Shi’ite groups and cause sectarian rife across the region.The GCC states fear the Iran nuclear deal will give Iran the legitimacy and the cash to transform from a pariah state to an emboldened actor with a free hand to expand its ongoing aid to its proxies.At the beginning of the month, in an article titled, “A Prudent Enemy Is Better than An Imprudent One” in the Kuwaiti government daily Al-Watan, columnist Abdallah Hadlaq wrote that the real enemy of the Gulf states is not Israel, whom he called “a friendly country.”In another article, published Sunday, August 16, Hadlaq called for the arming of Iranian minority groups to confront the Iranian regime. Hadlaq said Arab nations needed to bring their confrontation with their powerful Persian neighbor to the north “into their own home, financing and arming non-Persian ethnic groups, such as the Arab minority in southeastern Ahvaz, the Baluchi, Iranian Turkmen, Iranian Armenians and Iranian Azerbaijanis.He called on these groups to rise up and overthrow what he called the “fascist” regime in Tehran.For reconciliation and dialogue between the Sunni Gulf Arab states and Iran to materialize, Iranians have to abandon interventionist and sectarian policies once and for all. If Iran is truly to win over its neighbors, it will need to undertake monumental efforts both on its own and with others in the region to put out the flames it has started all over the Middle East.The author is a Middle East and Arab media researcher.