Is it time now for the ‘Arab Mandate’ for Palestine?

The British Mandate ended in 1947. Then the UN passed the Partition Plan 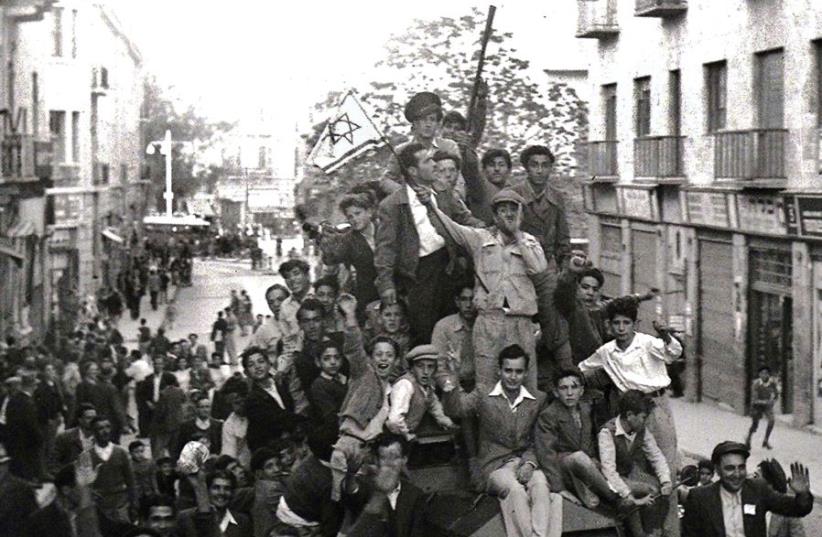 JEWS CROWD onto a British army armored car as they celebrate in downtown Jerusalem the morning after the United Nations voted to partition British mandate Palestine into a Jewish and an Arab state.
(photo credit: REUTERS)
Advertisement
After 30 years of administering Palestine following World War I, Britain announced in February 1947 that it would terminate “the Mandate for Palestine” and turn the issue of the future of Palestine over to the United Nations. The UN started to plan for the partition of Palestine.This week, with US President Donald Trump building his grand peace plan and the visit of Saudi Crown Prince Mohammed bin Salman (MbS) to Washington, it is time to re-examine the concept of the Palestine mandate.In 1947, Arab states would hear nothing of partition after the British Mandate. They and the Arabs of Palestine, who are called today “Palestinians,” declared war on the would-be Jewish state. “It will be a war of elimination,” warned Azzam Pasha, general-secretary of the Arab League, “and it will be a dangerous massacre which history will record similarly to the Mongol massacre or the wars of the Crusades.”On November 29, 1947, the UN voted to partition Palestine into an Arab state and a Jewish state. Arab attacks on Jewish targets escalated. On May 14, 1948, Great Britain withdrew, and Arab armies invaded aiming to eradicate the nascent Jewish state. They failed then, failed again in 1967, and still again in 1973.After the 1948-49 war, Israel was independent, but Gaza and the West Bank were swallowed by Egypt and Jordan, respectively. They ruled the areas with malign neglect, launching attacks against Israel that culminated in the 1967 war and Israel’s capture of the regions. Since then, Israel controlled the two territories and even tried to withdraw from Gaza unilaterally – with disastrous results. Hamas has made Gaza a war zone where the Muslim Brotherhood, Islamic State, Salafists, Iranian-backed groups, and gangster elements drag the Gazan population into living hell.Several of the Arab countries have since made peace with Israel, with Egypt and Jordan signing formal peace treaties.Others, like Saudi Arabia, Morocco and the Gulf States, maintain a de facto, underthe- table peace, mostly based on mutual security concerns.Other Arab/Muslim countries remain at war with Israel, particularly Iran and its Syrian and Lebanese satrapies.Hamas and elements within the Palestinian Authority, particularly Fatah, have never forsaken the goal of Israel’s destruction.The 1947 Partition Plan, the 1991 Madrid Peace Conference and the 1993 Oslo Accords were all supposed to lead to a Palestinian autonomy, a national entity, and eventually a state. Some have blamed Israeli defiance for the failure, but the failure of the PA to join a special “stakeholders” summit in Washington on March 13, 2018 designed to provide relief for Gaza shows that the Palestinian leadership over the past century has been steadfast (summud in Arabic) in its refusal to co-exist with a Jewish state.Palestinian extremism has riven the Palestinian population over that period to the extent that it cannot make peace. Once it was the Husseini clan versus the more moderate Nashashibis, the Husseinis and Fatah vs. the pragmatic Jordanian Hashemites, and more recently, Hamas vs. the PA. The Palestinians have been unable to form a national consensus or authority.National elections have been postponed for 13 years, and PA President Mahmoud Abbas still serves in his fouryear term. The Palestinian National Council legislative body does not meet.Internally, the Palestinian world sadly still resembles a tribal conglomeration, with each West Bank city, region and refugee camp run by competing clans, financial interests and extremist factions.In the absence of Palestinian leaders that can bring their people to statehood, perhaps it is time to form a “Arab Mandate for Palestine,” comprising Arab countries willing to fund nation-building projects, supervise and manage construction of housing for refugees in Gaza and the West Bank and create joint economic projects with Israel that would provide employment for the territories. The hardest task would be to establish a governmental monopoly of police and defense forces; the current panoply of armed militias, terrorist cells and criminal gangs is a threat not only to Israel but to Palestinian society as well.After Abbas declared a Palestinian boycott of American negotiators, Saudi Crown Prince MbS and his colleagues should be involved in negotiating and implementing President Trump’s broad plan.The “Arab Mandate” members have already done part of the work on behalf of the Palestinians: Qatar and the United Arab Emirates run projects in Gaza with diplomats on the ground. Jordan maintains a toehold in Jerusalem on the Temple Mount. Egyptian intelligence officers are working in Gaza to achieve a reconciliation between Hamas and the PA. A new city, Rawabi, has been built in the West Bank with Qatari investment and quiet help from Israeli town planners. But 15 Rawabis need to be built, and not just for housing Palestinian bourgeois or families of PA bureaucrats.In the case of Gaza, high-rise apartments should be built, but not just for Hamas families.As Israel’s ties with Arab countries grow, it would assuredly assist in Gaza and the West Bank on issues of water, agriculture, hi-tech and medicine.The author is the director of publications at the Jerusalem Center for Public Affairs. The comments here are his personal opinion. A former Israeli diplomat, he is the author of American Interests in the Holy Land.