It is not time for Israel to play Russian roulette

If the current state of relations between the two countries continues to deteriorate, Russia will have no reason to keep the Iranians away from the Golan Heights. 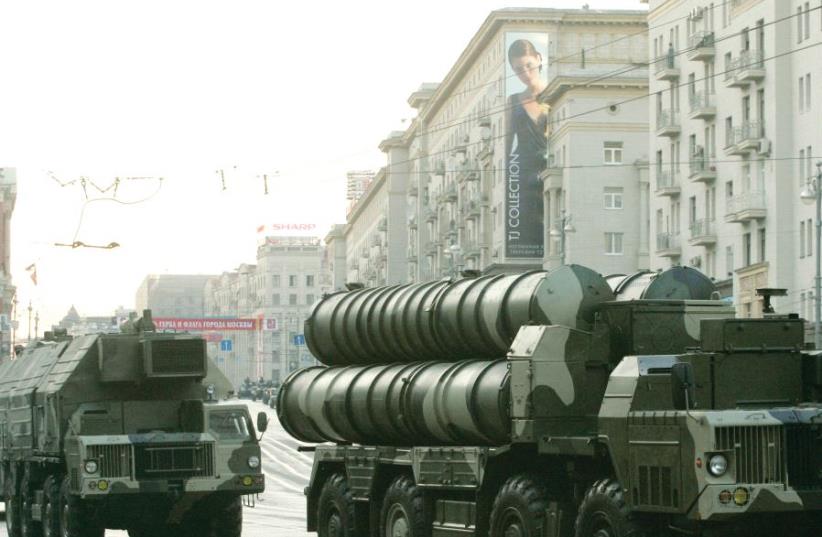 The Russian S-300 anti-missile rocket system moves along a central street during a rehearsal for a military parade in Moscow in 2009
(photo credit: REUTERS)
Advertisement
On September 17, Israeli Air Forces conducted missile strikes against multiple targets in Syria’s western shores. During this operation, as Russians confidently claim, Israeli F-16s used an IL-20 as a shield against Syrian surface-to-air missiles, which ultimately caused the downing of IL-20 plane by Syrian S-200 air defense systems and the killing of 15 Russian servicemen. This obviously humiliated Russia. Regardless of whether Russia is right in its claims or not, there is an ongoing crisis between the two countries, which can cost Israel a lot.Following the downing of the Russian IL-20 aircraft, Russia now wants to deploy S-300 air defense systems to Syria to boost the security of its troops. It is not clear for now whether Syrian forces will operate S-300 or not. However, it is quite obvious that Russia holds Israel responsible for the killing of its servicemen and wants to punish and irritate Israel by deploying the S-300 in Syria. Previously, the deployment of S-300 was suspended at the request of Israel. This time, Russia seems determined to deploy the systems to Syria. In this sense, as I have been saying since the night Russian plane got downed, Israel’s action on September 17 was a strategic mistake. Therefore, Israel needs to deeply engage in a dialogue with the Russians to prevent the further escalation because Russia has a lot of leverage to use against Israel.Part of that leverage is that Russia keeps Iran-backed forces a distance of 85 kilometers away from the Israeli border. If the current state of relations between the two countries continues to deteriorate, Russia will have no reason to keep the Iranians away from the Golan Heights. It can even start providing limited support to those groups in order to punish Israel. Israeli officials should remember that after the downing of SU-24 aircraft by Turkey, Russia overtly and covertly started supporting Kurdistan Workers’ Party (PKK), which has been waging guerrilla warfare on Turkish state since 1984. In this regard, Israel is no different from Turkey for Russia. Therefore, Israeli officials should try hard to prevent this scenario from happening.Furthermore, Russia can restrict Israel’s air operations against Iranian targets in Syria. Prior to the crisis, Russia and Israel had an understanding on this matter, and Russia had never tried to restrict Israel’s freedom of action in Syrian airspace. However, if the current crisis is not handled well, Russia may clip Israel’s wings and prevent Israeli Air Forces from conducting surgical operations in Syria. Obviously, this will result in the mushrooming of Iranian forces near the Israeli borders and would facilitate the transfer of advanced weapons from Iran to Lebanon and Syria. Currently, there is no country happier than Iran, which would benefit from this ongoing crisis between Russia and Israel. Therefore, Israeli officials need to take initiative and start a constructive dialogue with the Russians to resolve the crisis.The writer is a research fellow at Topchubashov Center, a think tank based in Baku, Azerbaijan, and a political commentator on Middle Eastern Affairs.