It’s time for the UN to go home

It’s time for Israel to act once and for all. It’s time to send the UN home. 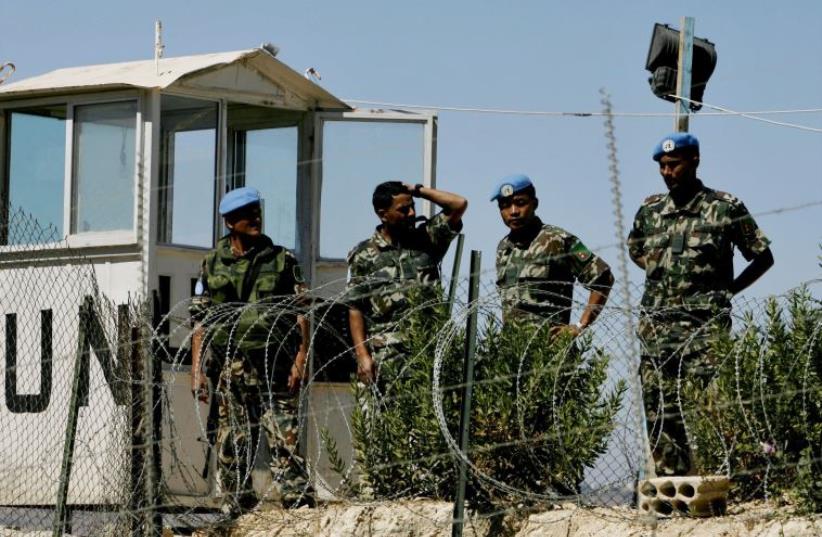 U.N. peacekeepers stand guard on the Israel-Lebanon border (2007)
(photo credit: ELIANA APONTE/REUTERS)
Advertisement
Perhaps occurring just a bit more frequently than an appearance of Halley’s Comet, Israeli politicians from across the political spectrum along with major Jewish organizations, Left, Right and Center, were nearly unanimous in condemning UNESCO’s recent vote denying Israel’s sovereignty over Jerusalem.Despite a 3,000-year Jewish connection to the city, UNESCO, ignoring both ancient and modern history, passed this antisemitic resolution on the same day the country was in the midst of celebrating the 69th birthday of modern Israel.In response, according to The Jerusalem Post, Prime Minister Benjamin Netanyahu directed the Foreign Ministry to deduct $1 million from the funds Israel annually pays to the UN. This is in addition to $8m. Israel reportedly will withhold from the UN following anti-Israel decisions both at the Security Council and the Human Rights Council.Likud Minister Miri Regev called on the government to go a step further and oust the UN from its UNTSOrun (United Nations Truce Supervision Organization) Jerusalem compound in the Armon Hanatziv neighborhood.The government was scheduled to discuss Regev’s suggestion this past Sunday.For our organization, Regavim, the UNESCO decision is further proof that the UN must go. In addition to the UNESCO vote, UN violations in Jerusalem brought to light by Regavim, and cited by Regev in her arguments for expelling the UN, show that they have long overstayed their welcome.Just last month Regavim filed a Jerusalem District Court petition against the UN, the Jerusalem Municipality and the Israel Lands Authority following the revelation of extensive illegal construction and a land grab being carried out by the UN inside the Armon Hanatziv compound.The area, located on state land, was presented to the UN rent-free following the Six Day War. UNTSO had originally arrived in 1948, supposedly to oversee the cease-fire between Israel and her neighbors following the War of Independence.Regavim has documented the construction of illegal office buildings and storage facilities in the compound in addition to remodeling work being carried out illegally on a historic building. Other violations include the operation of an illegal petrol station on site, and the seizure of other lands for usage outside of their allotted area. While approx. 11 acres were allocated for UN operations, UNTSO has illegally expanded to 19.The state responded to Regavim’s petition, asking the court to postpone its decision so that the Foreign Ministry could garner UN approval to allow representatives to tour the compound to investigate the matter.Regavim was baffled that the state was “seeking permission” to enter the compound as it is on state land, and asked how Israel can complain about the UNESCO vote when we aren’t exercising our own sovereignty over the area.Nevertheless, and regardless of whether or not the UN cooperates with the state in its investigation, the bottom line is that the time for talking is over. It’s now time for action.The cease-fires with Jordan and Egypt UNTSO is supposedly still monitoring have been holding up for years and years, thank you very much. With a united Jerusalem under Israeli control, secure borders under the watchful eye of the IDF and two peace treaties which remain intact (as cold as the peace may be), what exactly is the UN monitoring? And in the north it’s the IDF, not UNTSO, that is ensuring the relative quiet.Now throw into the mix the UNESCO vote, the anti-Israel bias on display in all of the various UN agencies, and the icing on the cake – the chutzpah of illegal building and land seizures in Jerusalem, where the tenant now thinks it has become the landlord – and enough is enough.It’s time for Israel to act once and for all. It’s time to send the UN home.The author is international director for Regavim, a thinktank dedicated to researching land issues throughout Israel.