"Like most Jerusalemites, I had gone to work as usual," Mazel describes living in Jerusalem during the Six Day War 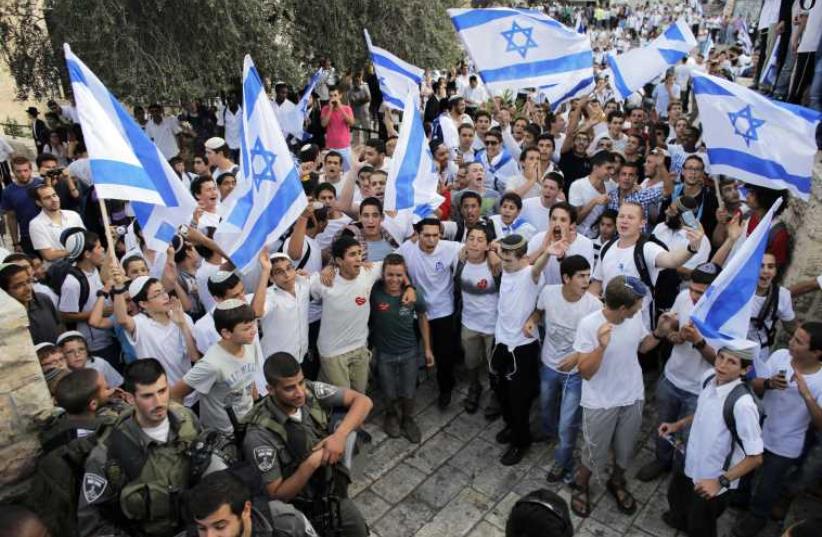 Jerusalem Day celebrations
(photo credit: REUTERS)
Advertisement
It happened almost half a century ago – 49 years ago to be precise – and one tends to forget the days of terror that preceded the reunification of the city.Egyptian president Gamal Abdel Nasser had enforced a blockade on the Straits of Tiran on the Red Sea, effectively cutting off Israeli vessels’ access to Asia and to Africa; he had also ordered the UN peacekeeping force to leave the Sinai Peninsula where it had been posted since the 1956 Suez war. On June 5, 1967, the beginning of the Six Day War, the government of Israel had been at pains to inform King Hussein of Jordan that the war was only directed at Egypt. Therefore, no efforts had been made to prepare the capital for an attack. The sudden Jordanian artillery barrage took everyone by surprise.Like most Jerusalemites, I had gone to work as usual. The first salvos found me at the Government Print House then located in Baka. Nobody knew what to do. While some of the employees chose to remain in the building, others decided to make a break for it. Though my two-year-old daughter was with a caretaker, I was afraid she would be scared and I joined them. A courageous colleague drove me part of the way and I started walking. It was very hot, there was a pervasive smell of gunpowder and the streets were deserted. The sound of big guns was heard intermittently.I made it home just as the neighbors were getting organized to take refuge in what passed for a bomb shelter – a small room on the ground floor with reinforced walls and a steel door which was usually used to store junk. It had been hastily cleared but offered no facilities whatsoever, not even water. There was no proper ventilation and we had to leave the door partially open most of the time. Seven families lived in the building and there were small children so there was barely room for mattresses. Of course the men had all been drafted.We settled down for the night with no expectation of being able to sleep. The hills of Jerusalem reverberated with artillery fire. Kol Israel radio was sending encouraging messages but refraining from giving any information. However, at the time Egyptian radio had special broadcasts in Hebrew, and boasted of a string of successes. It provided us with some unlikely comic relief, as when it was said that while Israelis were suffering, their prime minister was ensconced in a luxury hotel “with his much younger wife.” But as the hours went by, it was getting more and more difficult to joke. Any minute we expected Egyptian planes to bomb the city. Around two or three in the morning Kol Israel suddenly announced that the Egyptian air force had been completely eliminated. The relief was indescribable and we managed to get some sleep.Meanwhile reinforcements had been pouring into Jerusalem and were soon routing the Jordanians. On June 7, barely two days after the beginning of the war, a joyful yell was heard all over the world: “Har habayit beyadenu” – the Temple Mount is in our hands.The war was over for Jerusalem, but it was not before June 11 that a global cease-fire was reached. The Israeli government then took a momentous decision and the walls between eastern and western Jerusalem went down. An incredible event followed. Tens of thousands of Israelis walked to what had hitherto been forbidden territory, while tens of thousands of Arabs were going the other way, eager to discover the new city. They mingled, stopping sometimes to exchange a few words with the new neighbors. An endless flow of men, women and children filled the streets of the reunited city. It is safe to say that they all shared the same feeling of unreality. There was not the slightest incident to mar this extraordinary day where we all thought that a new beginning was bringing hope to all.It did not quite happen that way. Yet it is worth remembering that had King Hussein believed Rabin instead of Nasser, Jordan would still be ruling the West Bank and east Jerusalem... there would have been neither settlements nor settlers.