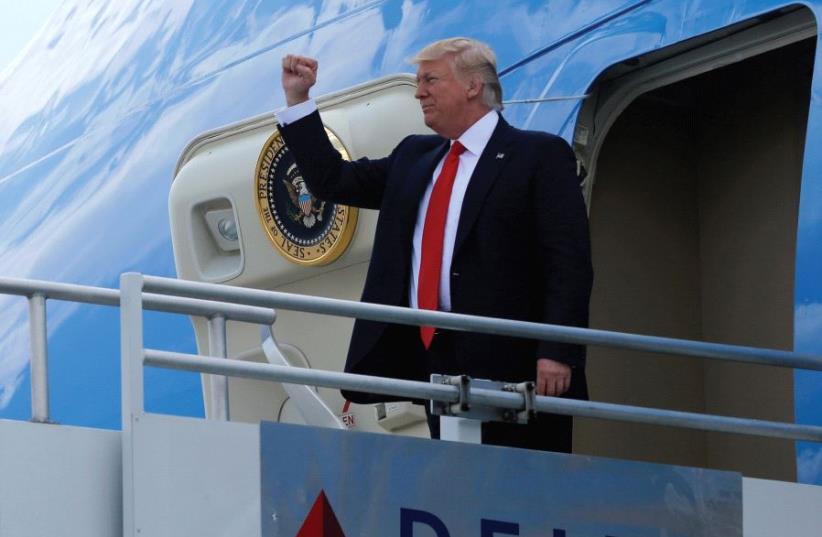 WHAT DEAL will President Donald Trump try to push when he gets to Israel later this month?
(photo credit: REUTERS)
Advertisement
The city of Jerusalem is covered with beautiful welcome banners celebrating President Trumps visit. Banners across from the president’s Hotel, the King David, are four-stories high. The Supreme Court bridge says, “Trump Make Israel Great.”The welcome campaign has been covered by major media outlets from all over the world. The signs say “Trump Make Israel Great,” “Jerusalem Welcomes Trump” and “Trump is a Friend of Zion.”A campaign of this magnitude has never before welcomed any US president in Jerusalem; it has been received with great enthusiasm by the locals and the tens of thousands of tourists visiting the city, causing photos of the signs to trend across social media.Donald Trump is the greatest president Israel ever had. President Trump’s trip to Israel is historic on many levels. Because of the moral clarity of both Benjamin Netanyahu and Donald Trump, Israel has a historic opportunity to achieve peace.Trump won last November’s presidential election because of a historic evangelical voter turnout, the largest in American history. Evangelicals do not tend to be monolithic except on two issues – the US Supreme Court and Israel. President Trump promised us he would recognize Jerusalem as Israel’s capital and move the US embassy to Jerusalem; we whole heartily believe that promise is nonnegotiable and will be fulfilled while he is president.Furthermore, who would have ever imagined that the first direct flight between Israel and Saudi Arabia would happen because of president Trump.Prime Minister Netanyahu’s bold and visionary outreach to Sunni Arabs on the basis of TTP: Terror, Technology and Peace, is completely in sync with President Trump’s vision of how good will ultimately win the day over evil.And who would have imagined a US president coming to Israel during his first few months in office and going to the Kotel, something which no president has ever done while in office. Anytime an American president comes to Israel it is significant, but we, the Christian community and all people of goodwill, are especially grateful that President Trump is making this visit at this time and we anticipate a stronger than ever relationship between the United States and Israel.In President Trump’s worldview, Israel is attacked because it is a Jewish state, and America was and continues to be attacked because it is a Christian nation. I have no doubt whatsoever that President Trump and Mike Pence, the most pro-Israel vice president ever, understand, respect and love the Jewish nation and will firmly stand by Israel as it faces its enemies near and far.Dr. Mike Evans is the founder and chairman of the Friends of Zion Heritage Center in Jerusalem and a member of the Trump Founding Faith Board.