The Jewish people’s yearning to return to their homeland draws its inspiration from the prophets of the Bible. 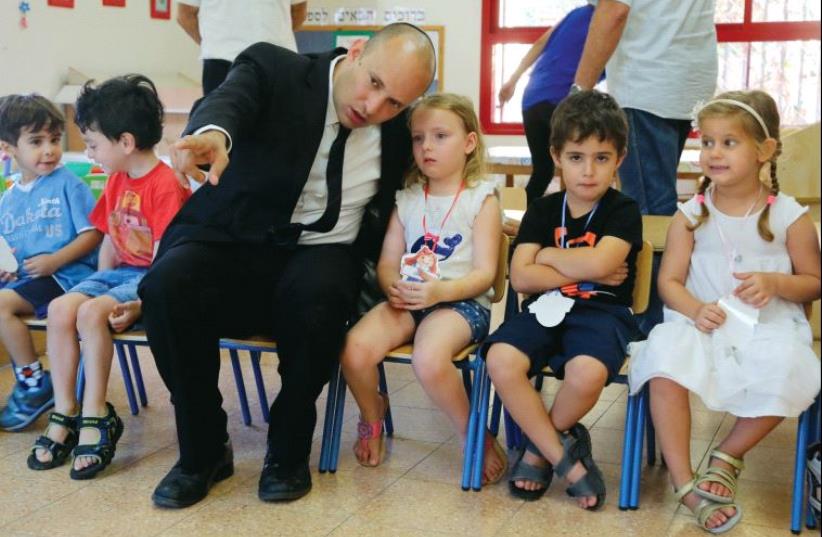 Education Minister Naftali Bennett meets with pupils at the start school year
(photo credit: SASSON TIRAM)
Advertisement
Education Minister Naftali Bennett’s declaration this week that the study of Judaism in the Israeli school system is “more important to me than studying math and sciences” has already begun to draw fire.Ironically, Bennett made his comments at an event honoring the TAL I Foundation for Jewish Study, the longstanding educational stream in secular state schools that focuses on pluralistic, egalitarian Jewish studies and prayer.But those opposed to all forms of religious studies in state schools have already accused Bennett of the religious indoctrination of Israeli schoolchildren and will likely charge that the minister favors Orthodox approaches over non-Orthodox or unaffiliated expressions of Judaism.A report by Panim, a federation of 52 groups promoting a pluralistic Jewish worldview, seems to uphold such a claim. The organization found that of the NIS 30 million the Education Ministry has allocated to Jewish identity activities in secular schools, 90 percent is going to Orthodox organizations, including some that identify strongly with Bennett’s Habayit Hayehudi Party.Clearly religious coercion in secular schools must be prevented. Faith should remain a private matter. Families should be allowed to decide whether they wish to raise their children in a secular or religious environment.However, Bennett’s point seems to be different. Judaism is much more than religion. It encompasses history, culture, liturgy, literature and tradition.Citizens of a state that defines itself as both democratic and Jewish have an obligation to study and become familiar with the Jewish component. Without the Bible, the creation of a Jewish state in the Land of Israel makes no sense. The biblical narrative is the story of the Jewish people. Whether or not one believes in a God that chose the Jewish people, brought them out of Egypt, gave them the Torah, brought them into the Land of Israel and exiled them for their sins, this story is integral to the very essence of the Jewish people’s identity. The Jews’ perception of their shared history, God-given laws and fate is what kept them together as a single people during over two millennia of exile in the Diaspora.The Jewish people’s yearning to return to their homeland draws its inspiration from the prophets of the Bible.That the ostensibly secular Zionist movement rejected early on attempts to settle Jews anywhere but in their historic homeland reflects these yearnings.Intimate familiarity with Judaism provides those living here with a sense of cohesion. Though Jews immigrated to Israel from wildly diverse corners of the globe, they share common customs and traditions that are based on a shared religious legal tradition. Whether they hail from Yemen or Poland, Ethiopia or Morocco, the Jews who came to Israel perceive themselves as a single people with a rich and ancient shared culture and identity.Without such a self-perception it would be difficult if not impossible to bring together such diverse populations.Integration, difficult enough as it is, would become an insurmountable endeavor.The creation of a uniquely Israeli culture also deepens our knowledge of Judaism’s central texts, narratives and history. Constantly returning to these sources for artistic inspiration provides contemporary Israeli culture – whether in the fields of music, art, literature, drama or film – with a sense of authenticity and continuity with the Jewish people’s past.But while the study of Judaism in all its forms is essential to the continued thriving of the Jewish people in their historical homeland, exploration of the richness of Jewish culture must not be dictated by a narrow reading or monopolized by a single stream or affiliation.As Bennett himself acknowledged during a ceremony to mark the 40th anniversary of the Tali Foundation, a pluralistic body which funds Jewish enrichment studies in secular schools, “No sector has a monopoly on Judaism and this creation belongs to the entire Jewish people equally.”Bennett doubled down on his comments in an interview with Army Radio on Tuesday morning, saying: “We are Jews. It’s not enough to be the startup nation, we must also be the Bible nation.”The challenge is how to safeguard and strengthen both those pillars without weakening either of them.