Legitimate criticism should be limited to policy. The attacks against Gorka and others in the administration are something else: political mudslinging. 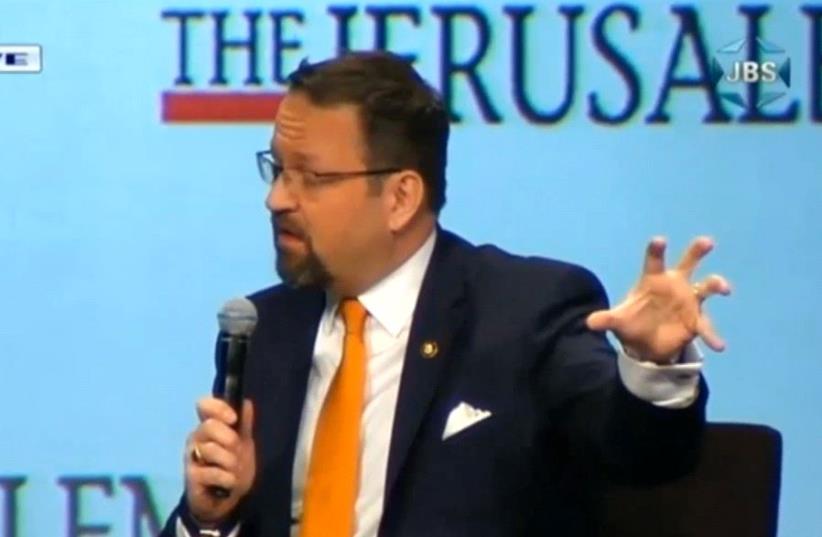 Sebastian Gorka at the JPost Annual Conference 2017
(photo credit: screenshot)
Advertisement
What happened to all the criticism of Sebastian Gorka, President Donald Trump’s senior adviser on counterterrorism? Why have all his critics disappeared?We ask, because for the last month this paper has come under a fierce volley of criticism for agreeing to host Gorka – who holds the title of deputy assistant to the president – at its annual conference in New York City last week.The attacks came from across the political spectrum, but mostly from left-wing, progressive organizations whose criticism was based on a series of articles in the Forward that alleged Gorka had secret ties with a far-right Hungarian group and neo-Nazi affiliate.One head of a US-based Jewish organization told the paper that hosting Gorka made The Jerusalem Post no better than Jews who acquiesced to the rise of Adolf Hitler in the 1930s in Germany. No less.As the Post’s editor-in-chief Yaakov Katz wrote a few weeks ago, the paper had asked the White House to send an official representative to its conference. Gorka was selected, and because of the reports about him and the emotions he stirred within the Jewish community, the paper felt it was not only appropriate to have him speak, but also its duty.During his on-stage interview, Gorka dismissed the allegations against him and challenged his critics to find even “one sentence that is antisemitic or anti-Israel” that he, himself, ever uttered. “Nobody,” he said, “has found one [such] sentence that I have said in the past 46 years.”Gorka then told how his father helped Jewish neighbors throughout World War II. In 1944, during Germany’s occupation of Budapest, Gorka said his father “escorted his fellow Jewish schoolmates – who were forced to wear the Star of David – to school every day and back to stop local German forces from assaulting or spitting on them.”The week before the conference, reports surfaced that Gorka was on his way out of the White House. Gorka’s dismissal – according to The New York Times, The Daily Beast and CNN – was imminent.But he is still in his position; still working in the White House. As he said at our conference: “The White House works like a well-oiled machine... I will be there for as long as the president has use for me.”Gorka might end up being transferred out of the White House. Someone might even end up finding an antisemitic comment he once made. But until then, it is worth considering the backdrop against which all those reports against him were written.There are problems with some policies of Donald Trump. This paper, for example, recently took him to task on immigration policy, his apparent indecisiveness on moving the US embassy to Jerusalem and his slowness in denouncing antisemitism among other issues.Legitimate criticism should be limited to policy. The attacks against Gorka and others in the administration are something else: political mudslinging.Disagreements with policy have long been part of any democratic system. But here, it seems, some just want to demonize the administration without substance or evidence.Questioning is important and that is exactly what this paper did by hosting Gorka at its conference. But at this stage to say he and the administration are antisemitic is simply baseless.President Trump arrives in Israel next week, and between meetings with Prime Minister Benjamin Netanyahu and President Reuven Rivlin, he will visit the Kotel, Masada and possibly Yad Vashem.This is in stark contrast to previous presidents who purposely skipped Israel on their overseas trips, even those that brought them to Israel’s backyard.Journalists and advocacy groups do their job by asking tough questions. Ensuring that this president – or any other official – is clear on the issues important to Israel and the Jewish people is legitimate. But smear campaigns, by their nature, tend to lack concrete proof, and that must stop.