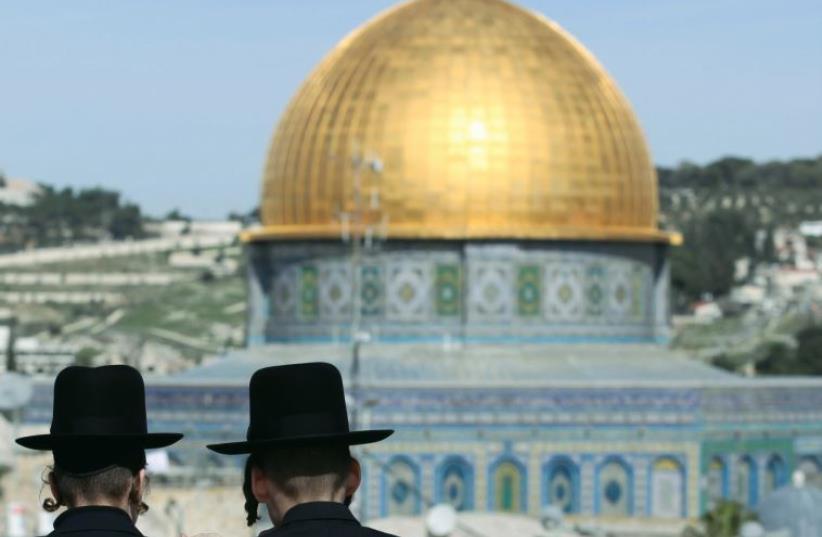 A view of Temple Mount
(photo credit: MARC ISRAEL SELLEM/THE JERUSALEM POST)
Advertisement
One might be excused in thinking that UNESCO stands for the United Nations Effort to Spread Communal Ostracism, rather than the UN Educational, Scientific and Cultural Organization. With regard to Israel, UNESCO began a campaign to reclassify Judaism’s holiest site as an exclusively Muslim religious area back in October.The organization had intended to vote this week on a resolution to that effect, but due to international pressure the Jordanian and Palestinian co-sponsors could not gather enough votes to ensure approval, and so postponed a vote to a future date.Nevertheless, the UN body has begun to put such a reclassification into practice by referring to the Temple Mount exclusively in Muslim terms, as if no Jewish history had taken place there.When UNESCO’s 58-member executive met in Paris in April it adopted a draft resolution that ignored the Jewish connection to the Temple Mount, by extension severing the connection between Christianity and the site.The April resolution calls for a return of the Temple Mount and al-Aksa Mosque to what it terms “the historic status quo” following the 1967 Six Day War. It was then that then-defense minister Moshe Dayan granted the Jordanian Wakf religious trust the right to administer the site.As Dayan stated: “We have returned to the holiest of our places, never to be parted from them again.... We did not come to conquer the sacred sites of others or to restrict their religious rights, but rather to ensure the integrity of the city and to live in it with others in fraternity.” It seemed like a good idea at the time.A half century later, the Palestinian Authority is leading a campaign to delegitimize Israel, particularly in Jerusalem, with a narrative that denies history. This recalls the comment by then-foreign minister Chaim Herzog to the General Assembly in September 1967 that the Arab League could table a resolution that the world is flat – and get 40 votes.“Ever since the Palestinians were accepted to UNESCO in 2011, things have changed,” Dr. Shimon Samuels, director of international relations of the Wiesenthal Center, told The Jerusalem Post. “It used to be a favorable arena for us, especially at the World Heritage Committee. But the Palestinians have launched a theft of the Jewish narrative. The Palestinians are trying to deny the Jewish narrative, because the validation of the Palestinian narrative depends on deleting the Jewish-Israeli one. It’s a replacement ideology.”The Temple Mount has been a focal point of violence over the past 10 months, incited by transparently false claims by Palestinian leaders that the government plans to change the status quo there. In the Palestinian-sponsored resolution, Israel is repeatedly referred to as the “occupying power” while being accused of damaging the site by illegal excavations and preventing the Jordanian Wakf from conducting repairs and renovations. The text also refers to the Western Wall plaza in quotation marks, instead using the Arabic term Al-Buraq Plaza.The draft resolution also accuses Israel of “planting fake Jewish graves in Muslim cemeteries” and of “the continued conversion of many Islamic and Byzantine remains into the so-called Jewish ritual baths or into Jewish prayer places.”The April resolution was approved by 33 states of the 58-member body, including Russia, Spain, Sweden, France and Brazil. The latter two have since backtracked, calling their respective votes a mistake. Seventeen countries abstained while six voted against — the United States, Estonia, Germany, Lithuania, the Netherlands and the United Kingdom.Foreign Ministry director-general Dore Gold accused UNESCO of being totally “disconnected from reality. As the historical heritage sites of this area are being systematically destroyed by jihadist forces, such as Islamic State, in Syria and Iraq, UNESCO’s adoption of utterly false allegations about Israeli archeological practices is misplaced and hypocritical, at best,” Gold said.Gold asked the committee to maintain the Old City’s status as an endangered site. It has been a World Heritage site since 1981. Considering its record, it is not inconceivable that UNESCO itself would endanger Israel’s other World Heritage Sites in its continuing pursuit of the ethnic cleansing of Jews.Will Masada be redefined as the site of Palestinian martyrdom, or the Necropolis of Beit She’arim lose its link to the Talmud, or the archeological tells of Megiddo, Hazor, and Beersheba be severed from their biblical connection? Anything is possible, given that the World Heritage Site of Jerusalem is listed as being located where the territorial status is yet to be determined.