Know Comment: Shooting ourselves in the head, in Hebron

The Elor Azaria trial should be plea-bargained to a quick end, cutting-short ugly attempts to indict half the country for fanaticism. 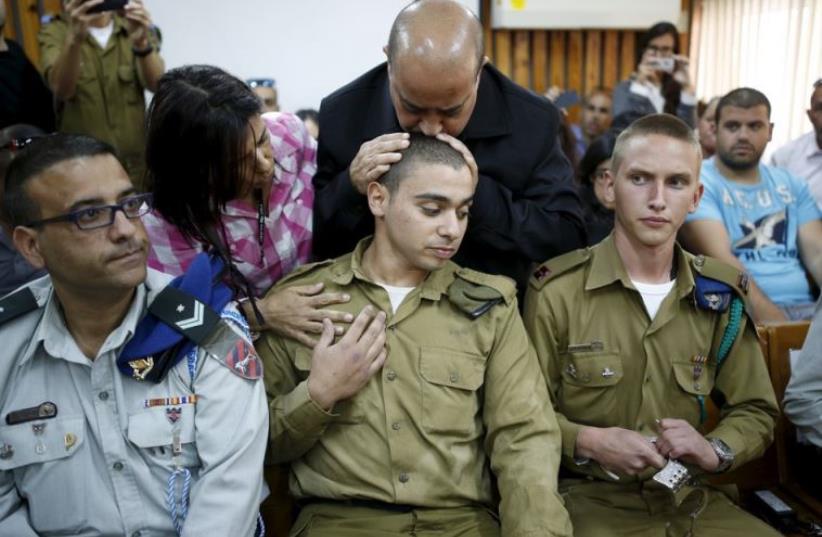 The father of Israeli soldier Elor Azaria, who is charged with manslaughter after he shot a wounded Palestinian assailant as he lay on the ground in Hebron on March 24, kisses his head in a military court
(photo credit: REUTERS)
Advertisement
When Elor Azaria shot that downed terrorist in Hebron in March, I immediately knew that the soldier should and would be disciplined. That mostly dead terrorist didn’t deserve to live, but it wasn’t Azaria’s decision to make.Perhaps Azaria misread the tense situation, and sensed lingering danger from the Palestinian attacker, but still. There were commanders on the scene; soldiers mustn’t get flustered and act precipitously; and interrogation of the terrorist might have been more useful than finishing him off.I figured that the army would conduct a quick field investigation of the incident; express regret for the wrinkle in operational conduct and sympathy for the entangled soldier; slap Azaria with an unexceptional punishment; re-clarify the rules of engagement to all its front-line field units that face tricky terrorist challenges daily; and move on.After all, this was a minor incident in our long war against Palestinian terrorism, nothing more! Instead and unfortunately, the army brass and extreme left-wing politicians have turned this incident into a grand morality play about the ethics of Israel.It has become a sick stage for the undermining of Israel’s legitimacy, blown out of all proportion by detractors who seek to sap the legality of Israel’s presence in Judea and Samaria and to crush the influence of settlers in the army and public life.It started with the miserable, overwrought condemnations of Azaria by then-defense minister Moshe Ya’alon and IDF chief of staff Lt.-Gen. Gadi Eisenkot. They practically branded Azaria a war criminal faster than you can say “we want to show B’Tselem, the ICC prosecutor, and all the progressive critics of Israel how holier-than-thou we are.”All it took was a video and few yelps from human rights NGOs, and they rushed to smear Azaria with dark overtones. They didn’t even wait for the results of an orderly IDF investigation on the scene. You might say that Ya’alon and Eisenkot were more trigger-happy than, say, Elor Azaria.Ya’alon and Eisenkot then took the imprudent decision to put Azaria on public trial for criminal activity. What they should have done was assign this for investigation by a team of senior officers and adjudication by a field tribunal at the operational level – as former deputy chief of staff Maj.- Gen. (res.) Uzi Dayan wisely suggested.The Military Advocate-General then hired a high profile prosecutor to try the case, and re-enlisted him to ensure the “right” result. Then, that flashy and aggressive prosecutor summarily rejected the military court’s recommendation that the parties attempt arbitration (what’s known as criminal mediation).The IDF brass then put pressure, apparently, on three layers of commanders to toe the party line. In their court testimonies, they tried to transform Azaria from a good soldier who was frightened and made a mistake in gray circumstances, into an insolent ideological insurgent resolutely out to upend the IDF’s restrained code of conduct.Instead of Azaria the poor dumb fella from Ramle who acted wobbly where he shouldn’t have, they recast him as an unscrupulous fundamentalist who purposefully plowed into a terrorist scene in order reeducate Israelis about how to fight terrorism and to help the radical right-wing capture the country.Zvi Barel of Haaretz, to take just one example of many, wrote this week that Azaria “represents the destructive symbiosis between the IDF and settler nation,” with the latter out to “establish a culture of disobedience and rebellion” in the name of “the rabbis and rabbinate. It’s a battle for control over the one state institution that can legitimately employ violence.”This, of course, is riotous and outrageous incitement against the majority of Israelis who are nationalist and traditional, and who simultaneously are neither fanatic nor seeking to yank the IDF off its moral moorings. They just think that IDF soldiers shouldn’t be endlessly second-guessed and over-prosecuted when confronting Palestinian terrorism. But Barel and his ilk are attempting to use the Azaria trial to discredit an entire political camp; to prosecute everybody who doesn’t carry the Oslo process fan club card.So, this is the time and place to loudly re-state a few basic truths.One, Azaria didn’t commit a war crime.These things happen in armed conflict.That day in Hebron – indeed, every day of the recent stabbing intifada – responsibility for loss of life lies with the Palestinian stabbers.The terrorists regularly perpetrate war crimes, not the Israel Defense Forces; and 99.9 percent of the time, IDF soldiers tiptoe through the tulips instead of responding with full force.So don’t you dare try to turn the Hebron incident into a black eye for Israel.Two, Israelis who are sympathetic to the plight of the probably-panicked-and-possibly- hotheaded soldier that day in Hebron are not fascists. They are patriots who send their sons to risk their lives in perilous military settings; people who know their son might make honest mistakes, and feel that when he does, due consideration should be accorded the soldier before rushing to lock him up – especially if the “victim” of a mistake is a terrorist who minutes earlier tried to kill soldiers on the scene.So don’t anyone dare try to paint Azaria’s supporters as undemocratic or immoderate.Third, beware the over-legalization of the IDF. By running a wildly-over-the-top criminal trial against Azaria, the General Staff risks evisceration of the will among combat troops to engage the enemy. If every soldier has to fear criminal prosecution for taking initiative in dangerous situations, Israel will be left with no defenders. This, of course, is exactly the reason why those around the world who wish ill to Israel are casting a spotlight on this episode.So stop trying to stick lawyers into every IDF armored personnel carrier.This cockamamy trial should be plea-bargained to a quick end, before the self-inflicted wounds fester.