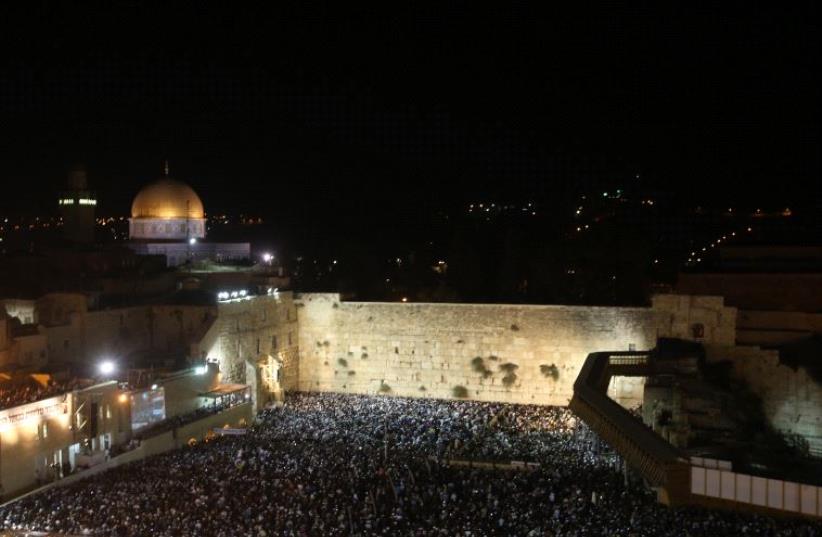 Western Wall Plaza.
(photo credit: MARC ISRAEL SELLEM)
Advertisement
he violent protests that took place on Friday at the Western Wall should serve as an embarrassment for the Jewish state.
Jews attacked Jews because some – in this case Women of the Wall (WoW) and progressive Jewish supporters – wanted to pray at Judaism’s holiest site in honor of the new month of Adar Bet.
Pictures of haredi men and women spitting, pushing and grabbing tallitot from the women and men who came for the New Moon prayer service are a stain on Israel’s democratic character. To say that Israel is the only country that allows religious freedom is not exactly true. If you are a Reform, Conservative or progressive Jew, don’t expect equal treatment, especially not at the Kotel.
Friday’s prayer service there Kotel marked the 30th anniversary since the Women of the Wall started their monthly prayer services at the holy site. In the decades since, the group’s successes are obvious, as Jeremy Sharon reported last week: women may legally pray out loud in a minyan (group of 10), and may wear prayer shawls and tefillin, if they so wish. Nevertheless, they are currently legally restricted from reading a Torah scroll in the women’s section of the Western Wall.
In 2013, the Jerusalem Magistrate’s Court rules that since WoW had been praying at the Kotel for 25 years, its customs were included in the customs of the site, and that it was the protesters to WoW’s prayer services who were disturbing the peace, not the prayer services themselves.
This was on display on Friday when Haredi protesters – mostly yeshiva and seminary students – pushed, shoved, yelled and spat at the women trying to pray at the Kotel.
These clashes never should have taken place. In 2016, the government voted and approved a plan – mediated by then-Jewish Agency chairman Natan Sharansky and then-cabinet secretary Avichai Mandelblit – under which the women would move their services to the southern section of the Western Wall, otherwise known as Robinson’s Arch.
Under the deal, the state was to recognize the Robinson’s Arch prayer area as a state holy site, to significantly upgrade the existing platform and to expand the management committee of the site to include representatives from WoW, as well as the Reform and Masorti (Conservative) movements.
But then in June 2017, Netanyahu had a change of heart and, under pressure from the haredi parties, reneged on the deal, setting off a crisis of trust between the government and American Jewish leaders.
Despite promises that the existing prayer plaza under Robinson’s Arch would be renovated and upgraded even without a deal, Netanyahu has failed to take action. Remember the stone that fell from the Wall and landed in the Robinson’s Arch plaza adjacent to the Kotel? That was eight months ago, and that part of the plaza which was supposed to be a prayer plaza is still closed.
This insulting treatment of the majority of the world’s Jews needs to come to an end. Providing a safe and respectable prayer space for all Jews, of all denominations, should be a priory for the Jewish state.
It was heartening to see the issue come up this week as some of the parties released their platforms ahead of the April 9 election. “There must be a third section at the Western Wall to accommodate all Israeli and Jewish sectors of all denominations,” the Blue and White Party platform says, as an example. “The egalitarian section must be expanded.”
We commend the party for including the issue in its platform and also have little doubt that Netanyahu understands the importance of the expansion of the plaza and the negative impact it is having on Israel’s ties with Diaspora Jewry. Nevertheless, we recognize the political constraints the prime minister had to deal with when faced with an ultimatum by the haredim to either revoke the deal or lose his coalition.
Benny Gantz, Yair Lapid and Moshe Ya’alon would likely not act differently when facing the same dilemma. But it is important that parties lay out their principles if they are elected already now and improving relations with Diaspora Jewry should be part of them.