Perhaps one day a woman will be appointed not just to an administrative position, but rather to serve as a full-fledged rabbinical judge. 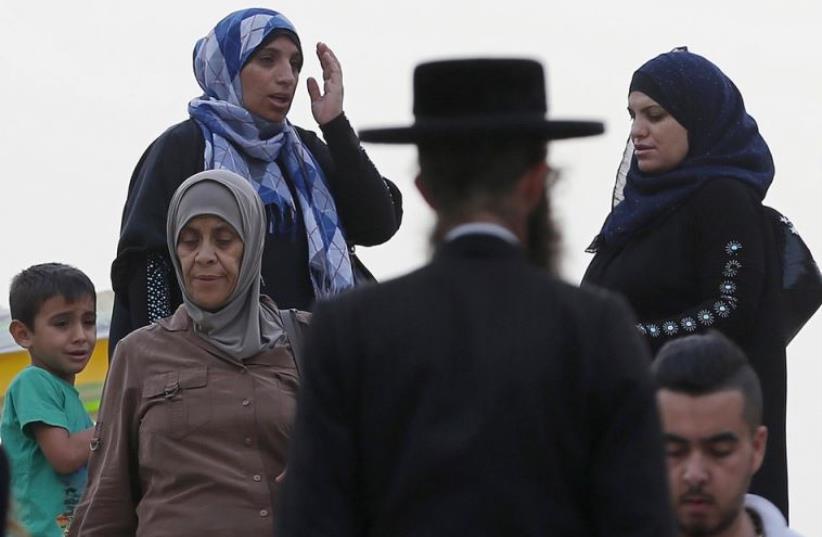 An ultra-Orthodox Jewish man walks next to Palestinian women in Jerusalem's Old City
(photo credit: REUTERS)
Advertisement
Last week, attorney and legal scholar Hana Mansour-Khatib made Israeli history when she became the first woman ever appointed as religious judge, or kadi, on an Islamic Shari’a court.Unfortunately, a parallel breakthrough in the rabbinical courts is unlikely anytime soon. In fact, a bill seeking to legalize the appointment of women to Shari’a courts was defeated a few years ago due to the support of haredi MKs who were concerned it would set a dangerous precedent.Still, thanks to pressure from the High Court of Justice, the Religious Services Ministry has grudgingly agreed to appoint a female deputy director of the rabbinical courts administration. It is a small victory for women, assuming the religious functionaries actually follow through. We are not holding our breath.Perhaps one day a woman will be appointed not just to an administrative position, but rather to serve as a full-fledged rabbinical judge.It is only natural that women serve as arbiters in religious courts – whether Muslim or Jewish – that deal almost exclusively with divorce law and the connected issues of property and custody rights. These highly patriarchal legal systems tend to discriminate against women. Giving a voice to women is a fitting act of justice.Ironically, the Islamic world, hardly a paradigm for gender equality in most areas, has something to teach Judaism when it comes to the appointment of female judges to religious courts. In the Palestinian Authority there are three kadis serving on Shari’a courts. Arab countries in the region have women serving on Shari’a courts.The appointment of Mansour-Khatib was impressive and can in large part be attributed to Justice Minister Ayelet Shaked’s unflagging push to have female kadis in Israel.A similar campaign in Israel’s rabbinical courts has little chance of succeeding. While gender equality might be more developed in Jewish culture in fields such as literacy and human rights, when it comes to traditional roles such as rabbis and rabbinical judges, Orthodox Judaism remains almost entirely dominated by males.Earlier this year, the Orthodox Union, the largest umbrella organization of Modern Orthodox synagogues in North America, banned women from serving as rabbis. And while American organizations such as Open Orthodoxy have begun appointing female spiritual leaders in a number of Orthodox communities, in Israel the Chief Rabbinate, which holds a monopoly over religious services and is controlled by a haredi leadership, is resistant to change.The process of choosing the director-general of the rabbinical courts, a purely administrative position, is dictated by religious sensibilities that discriminate against women.Currently, the law states clearly that candidates must pass the exams required by the Chief Rabbinate to serve as a rabbinical judge or a city rabbi. But only men are permitted to take those exams.The High Court has ruled in the past that according to the Basic Law: Human Dignity and Liberty, the state is obligated to make a sincere effort to appoint women to bodies such as the Turkel Commission, which investigated the Mavi Marmara debacle.Appointing a female director-general to the rabbinical court system makes sense beyond the need to strive for gender equality. That’s because the court’s mandate includes determining the fate of “chained” women, who are unable to remarry because their recalcitrant husbands refuse to finalize divorce for a variety of reasons, sometimes financial, sometimes personal. Women are attuned to the plight of agunot as few men can be.High Court Deputy President Elyakim Rubinstein rightly noted at the very beginning of this case, which has been dragging on for two years, that in the 21st century, when women have proven they are men’s intellectual equals in every imaginable field, the restriction against appointing a female director-general is anachronistic. We would add that it is also unjust, not just for women seeking to serve as director-general but also for the women who are regularly discriminated against by a male-dominated court system.The appointment of Mansour-Khatib is a reminder that religious cross-fertilization is important. Jews have something to learn from Islam’s approach to female representation among the judges of Shari’a courts. While we wait for the message to sink in, we hope to soon see a woman appointed deputy director of the rabbinical court administration.