Lebanon has a new president, but what does this mean?

In a world where Hezbollah is ready for war, Aoun is unlikely to be a president that urges restraint. 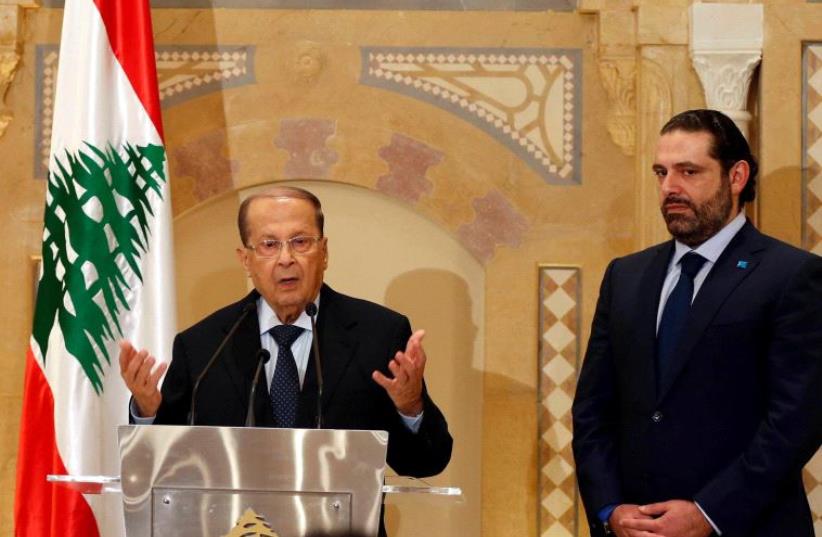 Michel Aoun
(photo credit: REUTERS)
Advertisement
It took more than two years and four rounds of voting (two of which had to be canceled because of an extra ballot), but Lebanon now has a president.Michel Aoun was elected on October 31 with 83 votes, more than sufficient to meet the requisite simple majority needed after the first round.Aoun’s election is good for Lebanon. Not necessarily because of who he is (there is no doubt he is a controversial figure), but because the presidential vacuum was deadlocking the political system.Political parties would protest the inability to elect a president by boycotting Parliament sessions, thereby preventing a quorum from being reached and rendering Parliament nearly impotent. In fact, it was the first time in about two years that Parliament saw all 127 members in attendance (there are usually 128, but one resigned and there have been no new elections). With a president now in power, the boycotts should largely cease, paving the way for much needed legislation and reform related to salaries, refugees, corruption, the garbage crisis and more.But who exactly is Aoun?Aoun is a familiar face in Lebanese politics since the civil war. A Maronite Christian (according to the terms of the 1943 National Pact, the presidency must be held by a Maronite), he was appointed to head a temporary cabinet in the late 1980s following the expiration of president Amin Gemayal’s term. This ended in 1990 when Syrian forces attacked and occupied the presidential palace in Baabda, triggering Aoun’s self-imposed exile until 2005 when Syria ended its almost three-decade occupation of the country.The founder of the Free Patriotic Movement (FPM) Party that is currently headed by his son-inlaw, Aoun allied himself with unexpected parties following his return to Lebanon. Most notably, he signed a Memorandum of Understanding (MoU) with Hezbollah in 2006. This placed him and his party squarely in the camp of the March 8 Alliance.Given that its name originates from the March 2005 protests that opposed the Cedar Revolution (which helped forced Syria out of the country), it was seen as an odd move for a former general that staunchly opposed Syria’s presence in Lebanon.A pathway to the presidencyOne of the benefits that came out of this alliance, however, was his nomination to the Lebanese presidency in 2014 by Hezbollah when president Michel Suleiman’s term concluded. Originally opposed by the March 14 Alliance, Aoun’s October 31 election came about after prime minister Sa’ad Hariri reversed his over two-year opposition to the former general. By this point, Samir Geagea, whose Christian Lebanese Forces Party is part of the March 14 Alliance, also backed Aoun.There are many theories explaining Hariri’s pivot.One is that he aimed to end the political deadlock and salvage his seemingly declining popularity in the country. The deal to elect Aoun not only calls for parliamentary elections next year, but returns Hariri to the prime ministership. His backers are also less than ideal, with Saudi Arabia and other Gulf states distancing themselves from Lebanon due to their opposition to Hezbollah.But it’s not just Hariri who is willing to sacrifice principle and ideology to retain power. Aoun’s 2006 abandonment of the March 14 Alliance reflects this same priority placed by Lebanese politicians and parties on maintaining and increasing political power rather than preserving ideology and consistency on issues. Lebanese politicians and their constituencies are so afraid of disenfranchisement that they will sacrifice almost any platform or political ideology to retain influence.And in the election standoff, it was the March 14 Alliance that blinked.Aoun’s oppositionAlthough there is relief at ending the political paralysis caused by the empty presidency, it should not be forgotten that Aoun still faces opposition.This includes in Parliament, where he received a majority vote but was unable to reach the super-majority necessary for an election in the first round.Opposition votes included blank ballots, ones for “The Cedar Revolution in the Service of Lebanon” (a reference to the aforementioned movement that helped push Syria out of Lebanon), and even one for model-turned-singer Myriam Klink.Outside of the government, there is also opposition especially among Sunni elements and those who disapprove of Hezbollah and its involvement in the Syrian conflict. Many consider this involvement as responsible for increased attacks in the country by Sunni militant groups like al-Qaida and Islamic State. Aoun’s March 8 Alliance, meanwhile, can be considered pro-Syria and pro-Iran, with the latter hailing the election as a victory, including for Hezbollah.Just a day prior to the election, posters of Aoun were burned in Sidon, a Sunni-populated area that is also home to Palestinian and Syrian refugees.The latter in particular should be concerned about an Aoun presidency: in September, he accused the international community of “throwing the refugee burden on Lebanon” and repeated that the country “will not nationalize Syrian or Palestinian refugees.”Among the Lebanese public generally, support or opposition to Aoun will likely also be contingent on his ability – or lack thereof – to resolve key issues in the country, including the security situation and other perennial issues like refugees and the garbage collection crisis.

What does this mean for the region?It’s hard to believe that this election will substantially alter the existing status quo of foreign policy. In his first speech, Aoun emphasized the importance of Lebanon “dissociat[ing] from the conflicts surrounding it and respect[ing] the Arab League by-laws.” Yet his status as a Hezbollah ally in the March 8 camp suggests that little if any pressure will be placed on the Shi’ite group to withdraw from or limit its involvement in Syria.Given the existing extent of Hezbollah’s commitment there, Aoun’s election is equally unlikely tip the balance in the other direction either. In other words, Hezbollah and Iran aren’t likely to gain significant momentum from the election, at least in the short term, including because they were perhaps the largest benefactors from the power vacuum created by the political deadlock.It’s similarly difficult to see how Aoun will be able to notably improve the country’s relationship with and involvement in the Arab League, which designated Hezbollah a terrorist organization in March and routinely condemns both the Assad regime and Iranian “meddling”; Lebanon condemned the former and has opposed resolutions regarding the latter. In fact, the election of the Hezbollah-backed candidate only validates Gulf Cooperation Council (GCC) concerns of rising Iranian influence in Lebanese politics.This also means that Saudi Arabia and other GCC states are unlikely to reverse current policy that has distanced them from Lebanon. Such policy includes the halting of a $3 billion aid package to the Lebanese army in February, the issuance of warnings against travel to Lebanon that same month and the sanctioning of Hezbollah- affiliated individuals and businesses. That said, while a continued withdrawal from Lebanon changes little in the short term, attempts down the road by Saudi Arabia or other GCC states to re-exert influence in the Mediterranean state are likely to face a cold reception.When it comes to Lebanon’s southern neighbor, the status quo is also likely to hold. Aoun may have stated his intention to “free the remaining occupied land and [to] protect our country from an economy that is still threatening [Lebanon’s] resources and water,” but the existing circumstances that reduce the potential for a conflict with Israel remain unchanged. Although smaller- scale escalations like that which occurred in January 2015 are possible, Hezbollah remains tied down in Syria and uninterested – at least at this time – in what would be a large and costly war with Israel. What it could mean, however, is that in a world where Hezbollah is ready for this war, Aoun is unlikely to be a president that urges restraint.Miriam Goldman Eps is a regional security analyst at Le Beck International, a Middle East-based security and risk management advisory company. Follow her on Twitter: @Miriam411.Katherine Eusey is a Middle East-based political and security analyst who specializes in Lebanon and the Gulf. Follow her on Twitter: @katezuck.