Israel soldiers are volunteering in neighborhoods that house many asylum-seekers and are receiving mixed reactions. 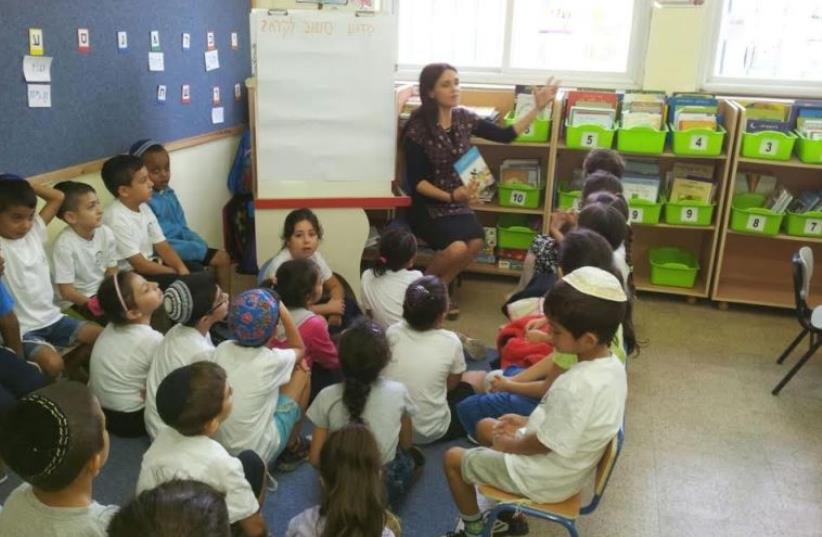 Students at the Dizengoff School in South Tel Aviv
(photo credit: THE CENTER FOR INNOVATION IN EDUCATION)
Advertisement
Since its creation, the IDF as a people’s army has been much more than just a military force. In addition to defending the Jewish state from its many enemies, the IDF has engaged in a wide range of non-military activities such as education, agriculture and public service.The vast majority of the military’s work has focused on work with Israelis. In recent years, however, in the wake of an influx of tens of thousands of mostly African asylum- seekers who entered Israel via the Sinai Peninsula, several IDF units began volunteering to work with the children of these migrants, many of whom are situated in south Tel Aviv.About a year ago, for instance, the elite General Staff Reconnaissance Unit (Sayeret Matkal) volunteered for a day at the Bialik-Rogozin School in the Neveh Sha’anan neighborhood, many of whose students are children of asylum-seekers. Members of the Educational Corps, who are required to do community service as part of their training, also perform volunteer work with the youngsters as do soldiers from intelligence units.These IDF volunteers tutored students preparing for Psychometric college entrance exams and helped them integrate into society. Many of the children have PTSD.Parents are busy or are otherwise unequipped to bring up the children in Israeli society.Much of volunteering focuses on alleviating the plight of very young children who are placed in overcrowded childcare arrangements known as “baby warehouses.”Generally the soldiers take the kids out to the park for some fresh air.Last year, the IDF weekly Bamachane published a story about the volunteer work. The piece reflected top brass’s pride in the program.And there was much to be proud of.Soldiers who volunteer help counter fear of Israelis in uniform among migrant youth.The Jewish residents of south Tel Aviv are less than enthusiastic by the IDF’s involvement, however. They have been the most directly affected by the influx of asylum- seekers into Israel. Crime rates in south Tel Aviv have risen and many Israelis feel threatened.May Golan, a south Tel Aviv resident and founder of Hebrew City, an organization that seeks to remove asylum-seekers from Israel, said she felt betrayed by the IDF. The volunteers working with migrant children are “cooperating with left-radical organizations and giving their stamp of approval that the asylum-seekers can stay,” she claims.Out of empathy for south Tel Aviv’s Israeli residents, Defense Minister Avigdor Liberman two weeks ago ordered IDF Chief of Staff Lt.-Gen. Gadi Eisenkot to halt all IDF volunteer work with the children of asylum-seekers.“If the soldiers have spare time, they should help Holocaust survivors or needy Israelis,” Liberman said according to Yediot Aharonot.Like Liberman, we empathize with the plight of south Tel Aviv’s residents. They feel threatened by the migrants.A neighborhood that was already impoverished and in need of state aid has over the past six years been overwhelmed by desperate foreigners seeking employment and shelter. No other place in Israel has been forced to deal with so many asylum-seekers. More needs to be done to help all residents of south Tel Aviv and make them feel safe, and we applaud more efforts to crack down on any lawlessness by the migrants.But that does not mean that the volunteer work carried out by soldiers with asylum-seekers must stop. The Knesset has passed legislation prohibiting asylum-seekers from working. This has stopped the infiltration of African asylum-seekers into Israel by taking away the incentive to come here. But we have a moral obligation to care for those who have already arrived.One of the reasons for the establishment of the State of Israel was to serve as a refuge for Jews from anti-Semitic violence. And that remains true to this day. As Jews, however, we must not lose sight of the plight of other people as well.The children of asylum-seekers are in need of help. Just as the IDF has been mobilized in the past for non-military objectives for the sake of Israeli society, so too should soldiers continue to help the children of asylum-seekers in south Tel Aviv.