Modi in Israel: A civilizational bond comes of age

Even before Israel was created in 1948, Israel’s founding father David Ben-Gurion spoke of India and China. 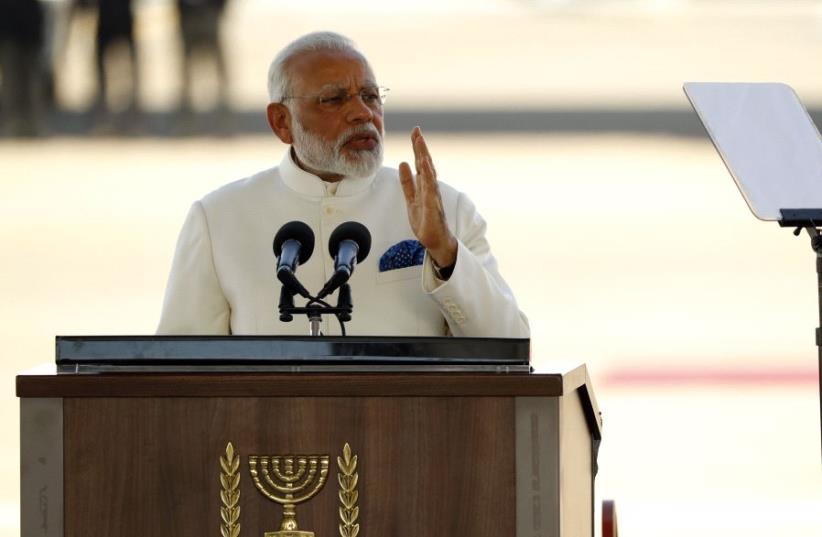 Indian Prime Minister Narendra Modi speaks during his welcoming ceremony in the presence of his Israeli counterpart Benjamin Netanyahu (not in frame) at Ben-Gurion International airport near Tel Aviv on July 4, 2017
(photo credit: JACK GUEZ / AFP)
Advertisement
A couple of days ago, sitting in my balcony in Jerusalem, I watched India’s beautiful flag rising over the roof of the prestigious King David Hotel, where Indian Prime Minister Narendra Modi will be staying during his state visit to Israel this week. Every week some foreign leader visits Israel and that country’s colors appear over the roof of the King David. But this time it is different. Israel’s excitement is palpable. It appears in the public preparations and in the growing media frenzy.The contacts between the Indian and Jewish civilizations are much older than most people appreciate. Words of Sanskrit origin appeared in the Hebrew Bible 3,000 years ago, while Jewish authors of Roman times, rabbis of the Talmud, and Jewish traders and philosophers in the Middle Ages spoke of India. Was this a monologue or a dialogue? Did an echo come back from India? We do not know.Even before Israel was created in 1948, Israel’s founding father David Ben-Gurion spoke of India and China.He called them the great “Asian civilizations” which would become the great powers of the future. In the 1950s and 1960s, he appealed to the Jewish People and to Israel to reach out to these countries, particularly India, but few listened. Israel was a tiny country of little more than a million inhabitants, surrounded by enemies that would not forget that the Jews had defeated them on the battlefield. Israel also had to cope with hunger, disease and the hundreds of thousands of poor Jewish refugees being expelled by unforgiving Middle Eastern countries.Amid all this, India was closed to Israel – not only politically and militarily, but mentally. No echo was coming back from India, which had a “Muslim constraint” on its foreign and domestic policies. Israel’s “love” was unrequited. When India finally established diplomatic relations with Israel in 1992, the constraint slowly began to loosen. During the past 25 years, military, economic and modest cultural relations have blossomed, little noticed by the public in both countries.Notably, during these years India’s links with the Muslim Middle East have also grown simultaneously.Neither the Arabs nor the Iranians made their relations with India dependent on India’s Israel policies. Even in 1992, when India and Israel set up diplomatic ties, they barely protested.Meanwhile, in Delhi, Indian diplomats learned the hard way that on contentious issues like Kashmir, the Arabs would always support Pakistan, irrespective of how loudly India condemned Israel in the UN; all the while, Israel stood in staunch support of India.This week, as Modi lands in Israel, we are seeing a turning point, no doubt.The leader of a new rising power – and perhaps a future superpower if Ben-Gurion was right – is embracing our small, still beleaguered homeland.This comes at a time when hatred for Jews, often disguised as hatred for Israel, is raising its ugly head again, not only in Muslim lands, but also in Europe, where only recently, from 1939-1945, a third of the Jewish People were murdered.During the course of Modi’s visit, economic relations will be the focus of discussions. Currently, trade between the two countries is modest – Israel’s trade with Turkey, hardly a friendly nation and with a population 20 times smaller than India’s, is slightly more than its trade with India. And cultural and academic links between India and Israel are poor and shamefully underfunded on both sides.For the long-term stability of the relationship, cultural links have to be strengthened. Many Indians aren’t familiar with Judaism and do not quite know where and what Israel is. On the Israeli side, many youngsters now visit India after military service – but they see the country as a strange, exotic place that’s not expensive and where they can relax for a bit. Hopefully, now they will also learn that India is a growing strategic heavyweight that has much to offer.Another important factor in bilateral ties will be the Indian diaspora.Though their forefathers had played distinguished roles in India, in Israel, members of the Indian diaspora have had limited success and, so far, no major impact on the India-Israel relationship.This is Israel’s loss as much as theirs. Their politeness and unobtrusiveness has not helped them cut through Israel’s turbulent melting pot.But this could be changing now, not least due to India’s repeated invitation to its Jewish diaspora to play an active role in strengthening India-Israel ties.So, what do Israelis expect from India in the future? Of course the government and industry would like to increase economic and trade relations as fast as possible. They want India’s big industrial conglomerates, which have a presence in every continent, to invest in Israel. Israelis would like India to take an even-handed approach toward its friend in international fora and perhaps stand up for Israel. Instead of abstaining, India could consider voting against anti-Israel resolutions at the UN; it could convince its non-Muslim neighbors to stop automatically supporting every anti-Israel UN resolution; India could also tell the ayatollahs in Iran that weekly threats to “wipe Israel off the map” are unacceptable.Well-informed Israelis know that all this will not happen anytime soon.But when the time comes, India could play a calming role in the Middle East – for as its power advances, its voice will be heard more.The writer is senior fellow at the Jewish People Policy Institute, and co-author of India, Israel And The Jewish People.