As countries across the Middle East continue to crumble and Islamists move into every vacuum, the issue of where Israelis build in Judea and Samaria has become irrelevant. 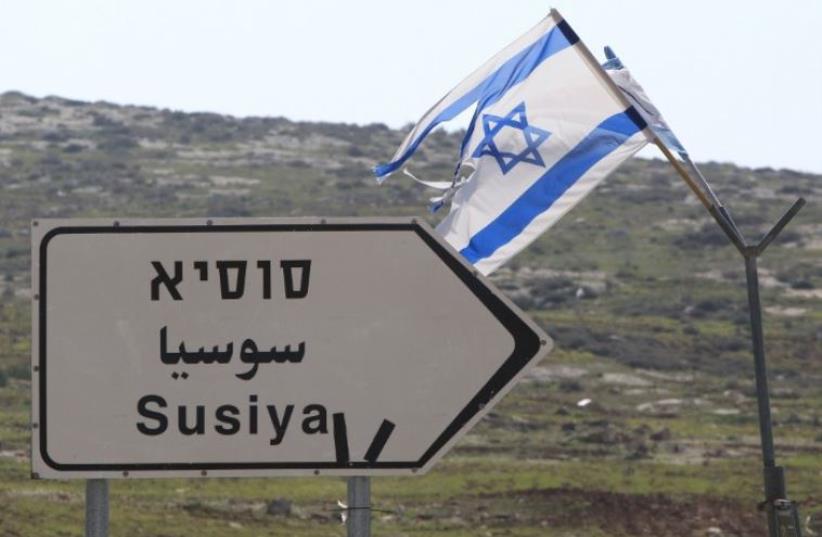 A road sign in English, Hebrew, and Arabic points to the Israeli settlement of Susiya
(photo credit: AFP PHOTO)
Advertisement
From US President Barack Obama to Turkish President Recep Tayyip Erdogan, state leaders at the United Nations General Assembly aren’t missing an opportunity to condemn the Israeli communities in Judea and Samaria, or what they call “illegal Israeli settlements.” However, the  term “illegal Israeli settlements” is outdated, incorrect and irrelevant.Since Israel liberated Judea and Samaria (commonly termed the West Bank) half a century ago, the international community hasn’t missed an opportunity to condemn her presence there, but that doesn’t make it illegal. Israel was forced into a war of survival and captured its historical highlands, which were legally ownerless at the time. The land wasn’t taken from another nation that had legal rights to it. In fact, no other nation on earth has more right to Judea than the people of Judah, aka the Jews.Over half a million Israelis currently live in Judea, Samaria and eastern Jerusalem. This is an irreversible fact. No Israeli government could feasibly ethnically cleanse hundreds of thousands of men, women and children from their homes, schools and businesses. These are not makeshift forts as the word “settlement” indicates, rather they are established towns and cities with shopping malls, high-rise buildings, factories and a large university.The main legal argument used against Israel’s presence in Judea and Samaria is that it violates the Fourth Geneva Convention, which states that an occupying power may not forcefully transfer a population into occupied territory. This was a provision written in the shadow of World War II and the Holocaust, intended to protect innocent civilians from extermination, slave labor or colonization during time of war. The Six Day War ended five decades ago, and the Jordanians have subsequently waived all rights to the land – which they didn’t have a legal right to occupy in the first place. Israel didn’t forcefully transfer anybody. Approximately one tenth of Israel’s population currently resides in over 200 communities and neighborhoods across Judea, Samaria and eastern Jerusalem, out of personal choice.Furthermore, Israel has legal, moral and historical rights to the land. This isn’t the occupation of a foreign territory, rather it is the Jewish people’s return to their ancestral homeland after 2,000 years of exile and unprecedented genocidal persecution. The Land of Israel is literally soaked in thousands of years of Jewish history, and archeological evidence to support this fact is displayed in museums worldwide.Even if one was to put ancient history aside, Israel’s legal claim is still as solid as the hills it inhabits. The State of Israel captured territory that did not belong to any other country and which was already designated for the establishment of the Jewish state. The legal status of Palestine, which the Balfour Declaration (1917) earmarked as the future “national home for the Jewish people,” was determined by the League of Nations (1920), the San Remo agreements (1920) and the British Mandate, in addition to being approved by the US Congress (1922). In the absence of any other laws, these laws still apply today, making Israel’s presence legal and valid.As countries across the Middle East continue to crumble and Islamists move into every vacuum, the issue of where Israelis build in Judea and Samaria has become irrelevant. The reality is, Israel already has Islamic State on two of its borders and cannot afford to have them overtake Judea and Samaria in the same way that Hamas has taken over Gaza. Peace will come when Palestinian leaders make it a real priority. Until then, Jews and Arabs will continue to live, grow, work and thrive side by side in Tel Aviv, Jerusalem and Judea, irrespective of how the international community chooses to label them.The author is chief foreign envoy for the YESHA Council and mayor of Efrat.