Netanyahu was setting the stage to portray himself as a victim – a victim of political conspiracies from within his party and within his coalition. 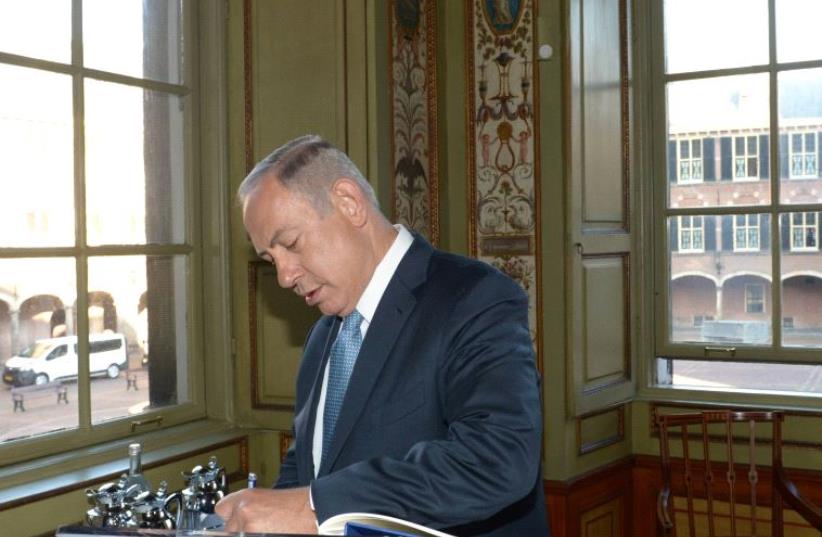 Prime Minister Benjamin Netanyahu at the Dutch Parliament.
(photo credit: AMOS BEN-GERSHOM/GPO)
Advertisement
The prime minister paced up and down theatrically, occasionally banging on the table and shouting in his booming voice for effect. He appeared ill at ease and under pressure, showing signs of cracks in his famously thick skin.That isn’t the opening scene in a second-rate political drama and neither is it an eyewitness account of a tense top-level cabinet meeting. I was part of a group of journalists that met with Benjamin Netanyahu this week for an off-the-record briefing that lasted for well over four hours, in which the prime minister, makeup an inch deep, showed off the full gamut of his theatrical repertoire in a brilliant monologue about a prime minister who is misunderstood, who is the only one who can ensure his people’s continued prosperity and survival.According to the ground rules of the briefing, the content of the meeting can not be divulged, but little matter: the prime minister did not put aside time from running the affairs of state to conduct an in-depth debate on matters of policy, and revealed nothing new.Instead, Netanyahu, conducted an a propria persona legal representation before the court of history over matters related to the Gaza war, bringing up accusations regarding the handling of the Hamas tunnels that have been made against him – in public – and then breaking them down in a point-by-point defense.Netanyahu was setting the stage to portray himself as a victim – a victim of political conspiracies from within his party and within his coalition, a victim of the media establishment, a victim of circumstance.But at the same time as Netanyahu portrays himself as a victim, constantly lashing out at the media’s portrayal of him, he also sees himself as the only person qualified to sail the State of Israel through choppy seas, to ensure its survival in an ocean of hostility. He is after all King Bibi, as Time magazine crowned him in 2012.As Netanyahu presents a list of his achievements over his long rule, he takes every opportunity to hit out at whoever he feels has wronged him, whoever he feels has failed to give him the admiration and credit he deserves. He is haughty and dismissive of opinions that differ from his own, yet constantly returns to his complaint that he is treated unfairly and public perception of him is dictated by a communications monopoly.He veers from monarchical importance to fragile self-esteem to near paranoia.Is it a show or is it for real? “If language was given to men to conceal their thoughts, then gesture’s purpose was to disclose them,” wrote the 16th-century Scottish mathematician John Napier. Netanyahu’s body language is authoritative and assertive – the finger point, the pants pulled up by the belt, the akimbo, hands on hips and elbows bent outward, the hands held out to the side at 45 degrees to say “Are you kidding?” My first impression is that perhaps Netanyahu really is beginning to buckle under pressure; on second thought I realize it’s all just a show, but in the end all I can say is “What was all that about?” Netanyahu is well known for his ability to invent issues that divert attention from the problems at hand. For years he used Iran’s nuclear ambitions, but the Iran nuclear deal has been signed and the can has been kicked down the road.BDS was a critical threat before Netanyahu recently declared victory over the movement, which never really built up to a credible risk to Israel’s economy.The Intifada of Knives, too, has run out of steam. Is all this showmanship just another distraction? What does the prime minister seek to gain from a series of meetings with the press in which he engages in rhetoric, not in substance? Was Netanyahu’s desire to win over his audience, to gain its sympathy? If so, his effort was misguided.If Netanyahu wishes to get his point across, he should go out and make it, in public and on the record.