I’m reminded how far we’ve come as a gender and how much further there still is to go. 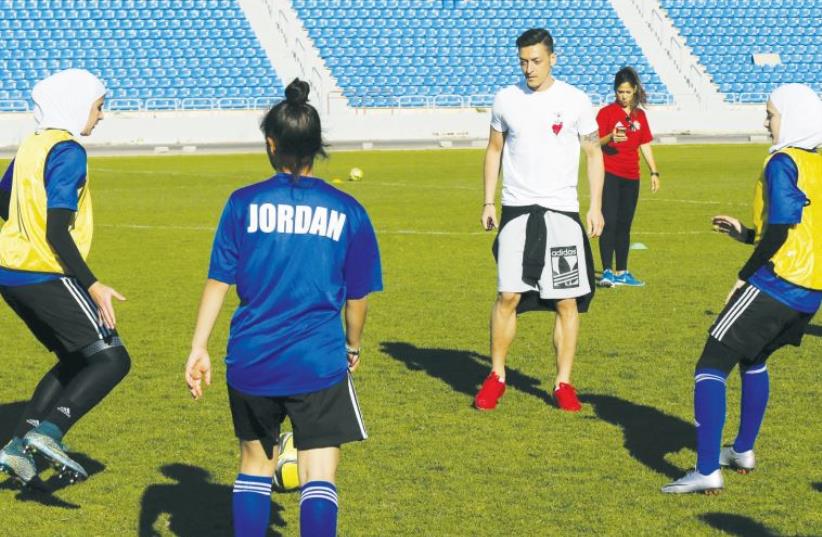 Jordanian U-17 women soccer players train with German footballer Mesut Ozil, during a training session at Amman International Stadium, in May
(photo credit: REUTERS)
Advertisement
How should a Westerner approach an Eastern culture? Amman is a modern city shadowed by years of history and some of the bestkept Roman ruins. As a first-timer in Jordan and in the Middle East beyond Israel, I wasn’t prepared for feeling quite so out of place – not so much the fact of being a foreigner and not speaking the language, but because I’m a woman.Walking around the streets, the question kept arising: where are the women? Of course there were the older Arab women making their way through the nooks and corners of the souk, their tanned, wrinkled faces carrying years of experience that allowed them to take on the “I don’t care what people think of me” attitude. However, no young women appeared to be out and around by themselves.Growing up in the US, I’ve enjoyed the freedom of wearing what I want, wherever and whenever. This freedom never seemed a privilege, but an inherent right.Late at night on the streets of Manhattan, I feel comfortable walking in a dress – legs, arms and head bare. Arriving in Jordan, which is considered one of the more tolerant countries in the Middle East, it was shocking to realize how their cultural norms left me feeling restricted.Initially it wasn’t the dress code that made me feel limited. Wearing a long dress with a scarf wrapped around my shoulders, exploring the bustling streets, and enjoying the aroma of spice shops was thrilling. The adrenaline of being in such a different culture made covering up new and fun. But what a difference it had been from America – where over the past few years students have been protesting school dress codes for girls to keep the boys from getting distracted. Was it my responsibility in Jordan to conform and cover myself up, to fade into the background? Sure, I have received patronizing comments from men while playing soccer with them and other subtle remarks in various aspects of my life, not necessarily for my dress but because of my ambition as a girl to go into uncharted territory for my gender. However, being in Amman was the first time I felt truly limited as a woman.Having lived in Singapore, San Diego and New York, I’ve grown up with the idea that women are as capable as men, an idea confirmed by my time in Jerusalem.In these cities, you see women sitting in cafés on their own, dressing to show off their figures, and embracing their independence. In Jordan, the few women that I did see in public were covered head to toe, accompanied by men, and quite reserved. Taken aback, I asked my Jordanian friend, “It is the 21st century, why are these women okay with this life?” She explained to me how being able to stay at home was considered a luxury as opposed to going around and running errands. Public and private life are considered, as she explained, two different entities.Not sure if this is just her personal opinion or a reflection of the general consensus of Jordanian culture, I was struck with an even greater question.As an outsider from the West, do I take my ability to exercise my rights as an independent woman universally or is it a subjective matter that only applies within the Western world? I had already conformed to Jordanian culture, wearing a head covering and a long dress.While it was fun for the moment, if it was no longer new and fun, did I still have to do it? I guess this ties in with the absence of women in public as a reflection of conservatism in this part of the world. Is it that feminism and the idea of the modern woman have not caught on in the Middle East, or are concepts like these overlooked due to a desire to maintain tradition and respect religious practices? Yet the two are not mutually exclusive.Maybe it’s easy for me to say, since I am not an Islamic woman living in the Middle East, but I do think women can find empowerment through tradition.Queen Rania Al-Abdullah of Jordan is a great example of this, serving as a strong advocate of women’s rights for Arab women in particular. She does not cover her hair, paving the way for what the modern Arab woman can be. She’s been highly influential in education equality for women. So perhaps dress is one way of connecting and upholding years of history and tradition for the women in Jordan, but it doesn’t have to be seen as a form of backwardness or oppression.Perhaps dress isn’t universal, nor are gender roles. Being in a more conservative culture made me realize how lucky I am to be a woman in a time and place where I have a lot of opportunity. I’m reminded how far we’ve come as a gender and how much further there still is to go. I do think there is a way for women to find empowerment through tradition.Through each cultural lens is an opportunity to experience the beauty of being a woman in a progressive world. The writer is a student currently on exchange at the Hebrew University.