No disrespect, American Jews, but come on

If you really want to affect Israeli policy, move to Israel. Experience the daily routine of an Israeli. Live the way we live. Vote accordingly. Shift the electoral balance. 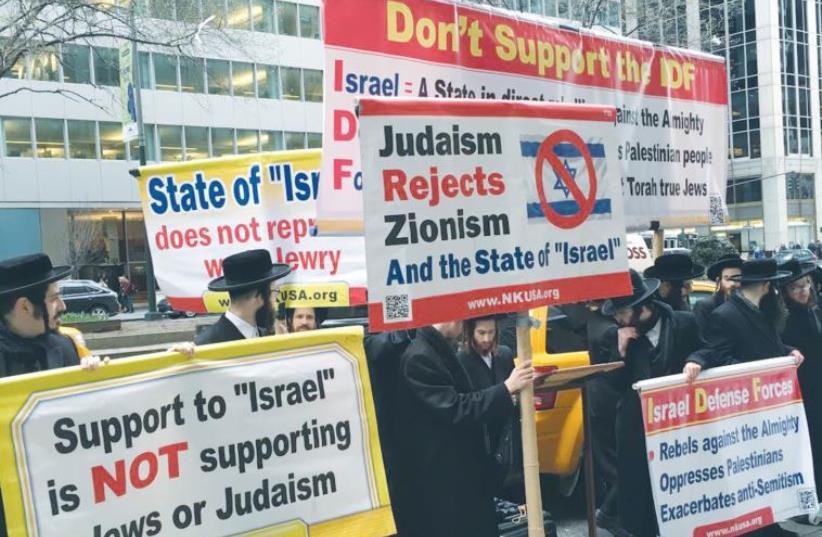 ANTI-ZIONIST NATOREI KARTA members picket the Friends of the IDF annual gala Tuesday outside Manhattan’s Waldorf Astoria Hotel
(photo credit: Courtesy)
Advertisement
‘Are you going to arrest members of the American Jewish community?” This was a recent statement directed to an Israeli soldier by an activist from the Center for Jewish Nonviolence. This was while they were protesting the occupation, by illegally building several structures with some Palestinians, south of Hebron. This statement is the peak of audacity. The apex of arrogance. The epitome of chutzpa.Some liberal Jews in the United States have been claiming that the divide between the American Jewish community and Israel is widening at an alarming rate. These Jews disagree with Israeli policy, and they voice their opinion. This is their right under the First Amendment. The protections of freedom of speech, however, do not permit you to come to Israel and engage in illegal behavior. But the chutzpa is that these Jews feel like they have immunity because they are from the American Jewish community. Would you hear a British Jew in Israel claim such immunity? Or any European Jew, at that? This stems from a larger problem: there are clusters of American Jews who think that their opinion on Israeli policy trumps that of the Israelis.The Israeli government is democratically elected. The composition of the Knesset is representative of the Israeli popular vote. The right-wing Likud Party currently holds 30 seats. The left-wing Zionist Union currently holds 24. Altogether there are 67 seats in the government, and 53 in the opposition. These are the election results. This is what the Israeli people chose. For American Jews to dictate Israeli policy is tantamount to them saying that they don’t trust Israelis (not only Jews, but Muslims, Christians, Druse and religiously unaffiliated – who also vote) to decide for themselves. It’s saying that they know what’s good for Israel, better than the Israelis do.American Jews, we love you here in Israel. I personally am one of you. Many of you are supporters of Israel. And many of those who are critical of Israel are so because they genuinely care about preserving the Jewish state. This is great. It’s wonderful to see Jews able to share concern, albeit in different ways, for the Jewish state. Israel is what unites us as a people. But please understand that when you patronize the Israelis, and effectively say that our democratic choices are unworthy, you’re taking a crowbar and prying that widening gap right open. You’re causing Israeli public opinion to shift unfavorably regarding the American Jewish community.Unfortunately, living as an Israeli Jew isn’t as simple as living as an American Jew. In addition to the common struggles we share – such as trying to make a living, managing social lives and garnering likes on Facebook posts, Israelis are under a constant looming threat. Often it’s not even looming – it’s out in the open.The threat of Hamas launching rockets is always there. The threat of Hezbollah launching rockets is always there. The possibility of carnage from the Syrian civil war spilling over into Israel is always there. And of course, the stabbings and car-ramming attacks, for which Palestinian Authority incitement is directly responsible, is always there. Plus, to make it all worse, we have Iran calling for our destruction and slaughter 10 times a day.It’s gotten to the point where bus stops in Jerusalem are barricaded, because Palestinian terrorists often smash their vehicles into waiting passengers – civilians. Parents of immigrants forbid their children to visit Jerusalem – our holiest city – because they’re terrified of their children being caught in a terrorist attack. Jews aren’t allowed to pray on the Temple Mount, our holiest site, not because of terrorism but because of a systemic policy of discrimination, implemented by the Islamic Wakf. And the cost of living – oy! Our lives are not simple here. Far from it. And the democratic decisions we make are based on that.The current government reflects the will of the majority of Israeli people. There is opposition here – and their voice is welcome, because Israel, too, has freedom of speech. I’m not saying that your opinion as an American is invalid, or even unwanted. I’m saying that if you really want to affect Israeli policy, move to Israel. Experience the daily routine of an Israeli. Live the way we live. Vote accordingly. Shift the electoral balance. But under no circumstances come here and demand immunity strictly because you’re an American Jew. That’s just uncouth.

The author made aliya from the United States and currently live in Jerusalem. He is the Israel director at The Pinsker Centre for Zionist Education, a UK-based organization that defends Israel on British university campuses. Shachor is also a member of the Hebrew University chapter of Alpha Epsilon Pi, the international Jewish fraternity.
Advertisement
Subscribe for our daily newsletter