No time for navel gazing

Canada’s rather cavalier approach to airport security was reinforced by Justin Trudeau. 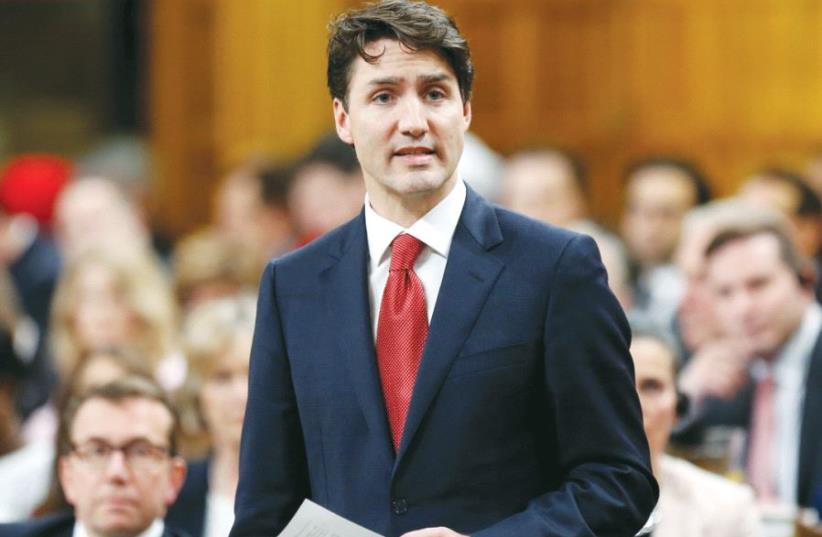 CANADA’S PRIME MINISTER Justin Trudeau in the House of Commons on Parliament Hill in Ottawa.
(photo credit: REUTERS)
Advertisement
Last Wednesday, while I was in Canada, a rather sensational story broke, which, incredibly, fell flat. But it merits close and unrelenting scrutiny.A Quebec-based television station – “TVA” – broadcast an investigative report indicating that the security clearances of four airport employees at Montreal’s Pierre Elliott Trudeau International Airport were revoked as a “precautionary measure” arising from concerns that the individuals were becoming “radicalized.”One of the four had been the subject of a police investigation and also had access to runways and other highly secure areas. Another, apparently, expressed interest in committing an attack similar to the Paris “Bataclan” massacre in November, 2015, in which 130 people were murdered and scores wounded in a music club and nearby restaurants on a busy Friday night.Yet another person shared Islamic State (ISIS) propaganda and information on his Facebook page.Two of these four individuals continue to be employed at the airport complex, but their security clearance has apparently been revoked and they can no longer access to restricted areas.Astonishingly, the vice president of operations at the airport, Pierre-Paul Pharand, confirmed that because these individuals are not directly employed by Aeroports de Montreal (the corporation that operates the airport) the “airport” has no jurisdiction over their continued employment. In fact, he told the media that he does not even know who they are or who employs them.This rather cavalier approach to airport security was reinforced a few days later by none other than Canadian Prime Minister Justin Trudeau, who, when asked by a reporter if individuals holding extremist views should work – presumably in any capacity – in Canada’s airports, responded thus: “I think that’s part of the kind of conversations we have to have as a society. Keeping people safe is paramount important [sic] but defending our rights and freedoms is as well, and making sure we do that in the right way.”Whereas safeguarding personal rights and freedoms is a paramount value in any democracy, the notion that they may compete with ensuring public safety in what could well be a zero-sum situation is alarming. (I am certain that the prime minister did not intend to make such a comment, but, regrettably, he did.) To act or not to act? This is not a university seminar where we have the gift of time to mull over the question. It is a real-world problem that requires an immediate response. That is the challenge of government: making very difficult choices and decisions, often with inadequate information.Clearly, certain authorities are concerned that these individuals may be prone to violence and, accordingly, revoked their security passes. The notion that such persons are suitable to work in any capacity in the airport compound, with easy access to all manner of personnel, is worrisome.Whereas the prime minister and others have made earnest comments about valuing safety, they seem rather passive in responding to what many international travelers would consider to be a very real threat.This proclivity to ponder, an admirable inclination in some instances, is a bit of an airport theme in Canada these days.Two weeks ago, the Trump administration announced that passengers on direct flights to the US from numerous points of origin in the Middle East would be prohibited from bringing large personal devices – like laptops and iPads – into the airplane cabin. This measure was imposed, reportedly, in response to intelligence indicating that terrorist groups were refining their capabilities to embed powerful explosives in larger technological devices.Shortly after the US announcement, the UK made public its intention to enforce similar rules. Last Sunday, Australia indicated that travelers coming from three Middle East locations will be required to undergo random explosive trace detection screening, a pale version of the more aggressive UK and US measures.And where, in this flurry of concern, is Canada? At the time the US imposed the new rules, Canadian Transport Minister Marc Garneau said Canada was “evaluating intelligence” received from the US to determine if such a change in protocol was warranted. He did tell reporters, however, that the government will “act expeditiously.”Well, one might expect that the government’s approach to such a grave matter might have been sorted out by now, if not within a few days of the “expeditious” comment.Yet, on this matter too, we have heard nothing more from Ottawa.Of course, such issues must be managed prudently. But handled they must be. And time – not to mention ongoing communication with the flying and general public – is of the essence. To carry on otherwise betrays an utter lack of understanding as to how democracies calibrate the delicate balance between individual and public rights, not to mention public safety.The author, former ambassador of Canada to Israel, is a senior fellow at the Jewish People Policy Institute. She resides in Tel Aviv.