A report by the UK’s Sunday Times that the Saudis have reached out to its ally Pakistan to acquire “off-the-shelf” atomic weapons is hardly surprising under the circumstances. 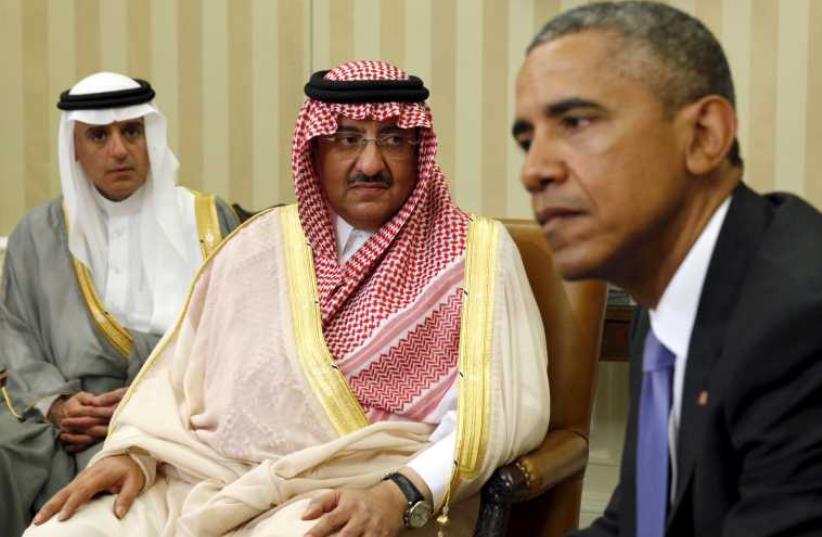 US President Barack Obama meets with Saudi Crown Prince Mohammed bin Nayef in the Oval Office of the White House in Washington May 13, 2015.
(photo credit: REUTERS)
Advertisement
A centerpiece of US President Barack Obama’s foreign policy agenda has been nonproliferation. But with Saudi Arabia more than just threatening to acquire nuclear capability “off the shelf” from Pakistan and with other Sunni states sure to follow, his dream of a nuclear-free planet seems more out of reach than ever.Obama’s pursuit of nonproliferation goes back at least to his short tenure in the Senate. As a member of the Foreign Relations Committee, he traveled to Russia, Azerbaijan and Ukraine to inspect nuclear facilities and developed an idea of international diplomacy. It was at this time that he began talking about initiating conversations with Iran.In 2009 Obama, in a speech in Prague, made sweeping promises proclaiming that the US has a “moral responsibility” to lead the world toward a nuclear-free reality.The following year, the New START (Strategic Arms Reduction Treaty) with Russia was signed.But the New START treaty was marred by Russia’s unwillingness to cooperate. It was barely ratified and generated no additional nonproliferation deals.Elsewhere, the nonproliferation cause seemed to be falling apart as well. Not only did North Korea – despite diplomatic efforts – obtain nuclear capability, it began spreading its know-how elsewhere.Where diplomacy failed, however, the use of force provided remarkable results.A nascent nuclear weapons facility in Syria, developed by the North Koreans, was prevented from being developed further not by diplomacy but by a military strike – reportedly by the IAF. North Korea has, apparently, not tried to repeat the performance since.Another case in point is Libya, which, in the wake of the coalition forces’ invasion of Iraq in 2003, decided to give up its weapons of mass destruction. The late Libyan leader Muammar Gaddafi wanted to avoid the fate of Iraq’s Saddam Hussein.For a time in 2003, Iran also showed a real willingness to negotiate with the US. The Iranians were frightened because US forces, in just three weeks, had routed an army that Iran had failed to defeat during a bloody eight-year war. A twopage Iranian proposal for a broad dialogue sent by fax via Switzerland suggested everything was on the table – full cooperation on nuclear programs, acceptance of Israel and the termination of Iranian support for Palestinian terrorist organizations. In hindsight, the Bush administration was probably wrong to be skeptical.These cases seem to show that deployment of military might can scare autocrats into doing the right thing. And cautious use of force also has a ripple effect on the decision-making process of autocratic regimes not directly targeted, because they fear they will be the next in line if they do not comply.Despite the failure of New START and the North Korea precedent, Obama continues to make the case for diplomacy, most recently vis-à-vis Iran. In an address in the Rose Garden shortly after the framework agreement with Iran was announced, Obama laid out two alternatives: more sanctions or bombing Iran’s nuclear facilities, both of which he ruled out.“Do you really think that this verifiable deal, if fully implemented, backed by the world’s major powers, is a worse option than the risk of another war in the Middle East?” he said. “Is it worse than doing what we’ve done for almost two decades, with Iran moving forward with its nuclear program and without robust inspections? I think the answer will be clear.”For the US’s Gulf allies and for Israel, the answer is not so clear.First, a limited military operation in Iran led by the US would not necessarily spark a war.Second, by signing an agreement with Iran that allows it to retain much of its enrichment capability and continue to amass research, the US and other members of the P5+1 are essentially granting legitimacy to an Iranian nuclear program that is clearly not for peaceful goals. The Saudis and other Sunni states in the region are asking why they can’t also be granted legitimacy for their own nuclear weapons programs.That is the essence of the mantra “no deal is better than a bad deal.”A report by the UK’s Sunday Times that the Saudis have reached out to its ally Pakistan to acquire “off-the-shelf” atomic weapons is hardly surprising under the circumstances.Obama’s goal of a nuclear-free planet is a noble, though somewhat naive, aspiration. If he is truly interested in achieving it, however,