On My Mind: American Jewish divide, 2016

To be sure, the Jewish community is not and never has been monolithic on any issue. 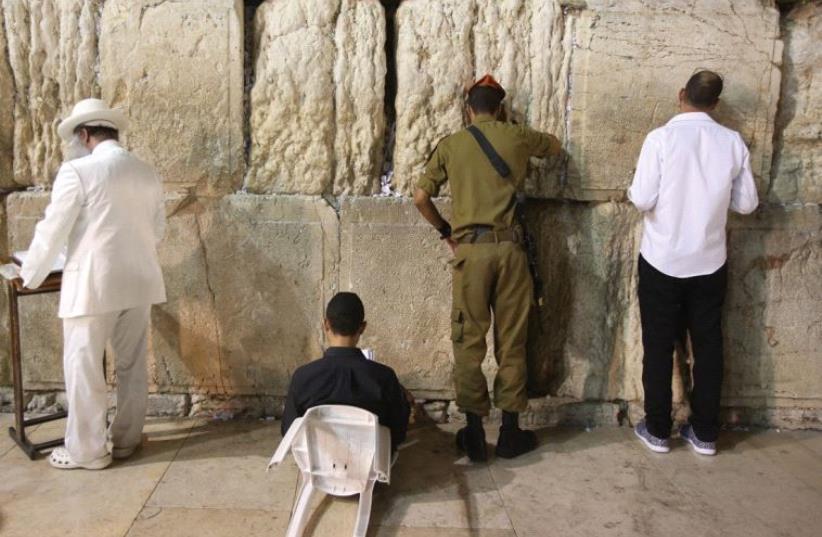 JEWS MOURN the destruction of the First and Second Temples at the Western Wall last night
(photo credit: MARC ISRAEL SELLEM/THE JERUSALEM POST)
Advertisement
According to an AJC survey released this month, Democrat Hillary Clinton would defeat Republican Donald Trump among Jewish voters by 61 percent to 19%, with Libertarian Gary Johnson and the Green Party’s Jill Stein winning 6% and 3% respectively, and 8% not voting.Four years ago, the nonpartisan AJC’s pre-election survey found that 65% of American Jews would vote for Barack Obama and 24% for Mitt Romney. On Election Day 2012, however, Obama gained 70% of the Jewish vote compared to 30% for Romney.Whether a similar bump may take place this year is questionable, given the shifts in party affiliation by Jewish voters. In 2012, 55% identified as Democrat, 16% as Republican, and 27% as Independent. This year 51% identify as Democrat, 18% as Republican, 26% as Independent, 1% as Libertarian and 2% with the Green Party.To be sure, the Jewish community is not and never has been monolithic on any issue. In American politics today, the sharpest divide is by denomination: the views of the Orthodox differ markedly from those of the other streams and from those who identify as “Just Jewish.”A prime example of this divide is the AJC survey’s finding that Trump would win 50% of the Orthodox, 29% of Conservatives, none among the Reconstructionists, 10% of Reform and 17% percent of Just Jewish voters.Clinton would win 21% of the Orthodox, 57% of Conservatives, 71% of Reconstructionists, 74% of Reform and 60% of Just Jewish voters.Similarly, in AJC’s 2012 pre-election survey, Orthodox Jews supported Romney over Obama by 54% to 40%.In this year’s contest, third party candidates are attracting some support among all the Jewish subgroups.Johnson was favored by 6% of the Orthodox, 7% of Conservatives, 4% of Reconstructionists, 6% of Reform and 5% of Just Jewish respondents. Stein would get 1% of the Orthodox, 2% of Conservatives, 15% of Reconstructionists, 2% of Reform and 5% of Just Jewish votes.This year the Orthodox cohort stands out for how many will not vote for president. Fifteen percent of the Orthodox do not plan to vote for any presidential candidate, as compared to 1% of Conservatives, 7% of Reconstructionists, 4% of Reform and 10% of Just Jewish respondents.Denomination is also a significant factor on one issue of concern to American Jews – the State of Israel.Fifty-seven percent of all respondents to the AJC survey think Clinton is more likely to promote US-Israel relations, compared to 22% who chose Trump. But among the Orthodox, 49% said that Trump is more likely to promote US-Israel relations and only 18% chose Clinton. The split among Conservatives is 50% Clinton and 33% Trump; for Reconstructionists it is 77% Clinton and 0% Trump; within Reform it is 70% Clinton and 14% Trump; and the split among Just Jewish voters is 59% Clinton and 18% Trump.Another symptom of the communal divide over Israel came in response to the statement that “caring about Israel is a very important part of my being a Jew.”Seventy percent of the Orthodox agreed strongly, 12% agreed somewhat, 4% disagreed somewhat and 6% disagreed strongly.In striking contrast, 47% of all respondents agreed strongly, 26% agreed somewhat, 16% disagreed somewhat and 10% disagreed strongly.Given the longstanding fact that many more of the Orthodox tend to visit Israel – a fact reconfirmed by the new AJC survey – this divergence is hardly surprising.Eighty-five percent of Orthodox Jews have been to Israel, 79% more than once. Of the full sample, 52% have never visited Israel, 21% have visited only once and 27% more than once.What happens outside the United States, however, is not a top concern when American Jews decide how to vote. Fifty-one percent of respondents said the most important issue when going into the voting booth is “The Economy/Jobs,” noting it as either their first or second choice. “Terrorism/National Security” and “Foreign Policy” were considered the second and third most important issues.Again, the Orthodox chose differently, with 68% selecting “Terrorism and National Security” as their first or second choices of most important issues.Of course, a lot can happen in the next five weeks leading to Election Day, but when it comes to the Jewish vote one thing is certain. Given the history of high voter turnout among Jews and their concentration in states with many Electoral College votes, how they cast their ballots will remain of great interest to the candidates vying for the presidency.